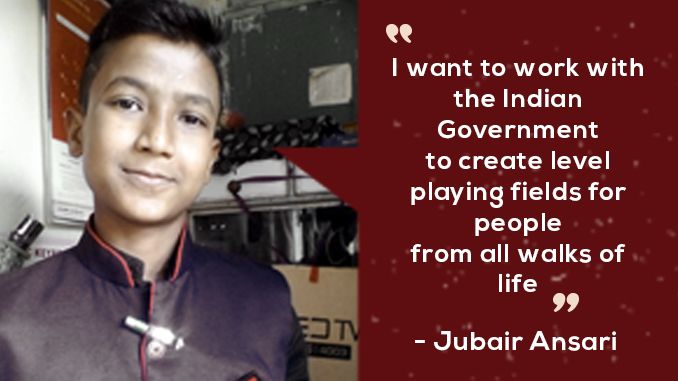 The state of Jharkhand is renowned for its mineral resources and vast spreads of idyllic forests and woodlands. With a rich historical and cultural background, the state is also home to some of India’s finest educational institutes like IIM Ranchi, BIT Mesra (Birla Institute of Technology, Mesra) and National Institute of Technology Jamshedpur.

8th grader Jubair Ansari hails from the quaint village of Giridih in Jharkhand where he is one of the first students to receive formal education. Despite being physically challenged from birth (his left hand stunted in its growth since his birth), Jubair attends school and participates in all activities with the mirth excitement of any regular school student, making use of this opportunity to the fullest. Jubair’sfather-Ayub Ansari is a farmer, who along with his wife and five daughters, lives in their ancestral property in the village. While schools in Giridih met the basic educational requirements, Jubair always aspired to study in a better school. Looking at his enthusiasm, Jubair’s grandfather offered to take care of his school tuition fees and invited him to stay with them in Bokaro. Soon Jubair moved to the Steel City of India to attend Sardar Patel Public School while staying with his grandfather’s family of ten.

The dreams of a farmer’s child

Despite the financial and physical setbacks, Jubair is an extremely motivated and proactive child. It is his dream to become an IAS officer and bring about the much needed change and opportunities for people belonging to financially weak backgrounds.

Jubair feels that, “It is very hard to access quality education and basic healthcare if you are financially weak. I want to work with the Indian Government to create level playing fields for people from all walks of life.”

Ira Singhal-the 2015 UPSC topper, is Jubair’s idol. Ira is also physically disabled and her success has made him realize that with the correct attitude, determination and willpower, a person can conquer his/her dreams.

The challenges and simplicity or of rural life

Jubair and his sisters are the few lucky ones from the village who have had the chance to be enrolled in a school in the city. Amidst extreme poverty and daily life hassles, education often ranks very low in every parent’s priority list in Giridih. Hence, homecoming is one of the most celebrated moment for Jubair’s family where neighbours, friends and fellow villagers pour in to meet them and hear stories of their school His eldest sister, who has just completed her 12th board examinations, makes use of her vacation period giving tuitions to young children in the village for free.  “In a village where people have to walk 4-5 kilometers to get to the nearest hospital, education is a luxury. We are well aware of that because even though all of my other 4 sisters have received some form of education, my parents could not afford to send my youngest sister to a school. She stays at home with my parents helping with household work. My eldest sister teaches out of love and gratitude for the village and to help bring village children at par with city children,” declares a proud Jubair suggesting that his sister is also one of the people who keep him inspired.

From a cricket lover to an accidental Qawwali performer 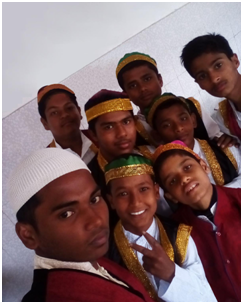 An ardent follower of cricket, he had started following the game at a very young age and even began playing for his school team. His disability however prevented him from continuing his physical activities. Not being the one to give up, Jubair soon discovered his natural talent for singing and reformed his passions around this classical art form. After a few singing sessions in his class, his class teacher took the initiative of enrolling him in the school Qawwali team. This small step by his teacher acted as the springboard for Jubairto participate and perform in several school competitions in the region.

The BYJU’S journey and Jubair’s love for learning

A lover of Biology and Math, the BYJU’S App was the best gift that he ever received from his grandfather. Being a studious child, Jubair believes that the BYJU’S app has completely changed his views on complex topics. It helped him unlearn and learn topics in a way that helped understand and retain concepts effectively.

“I could never imagine that topics in Math could be explained through animations and 3D objects. To me, Math was always something that had to be written down and practiced; I rarely understood the basics of any concept. But with the app, I am can visualize problems, and see the logic behind each topic,” says Jubair. Having lived with his grandparents and other family members for almost 12 years, Jubair’s main support system has been his aunt, who helped with his studies till his 5th grade. After a few years of struggling with his education, Jubair’s grandfather gifted him the BYJU’S app which eased his  learning process and also gave him a new perspective about how loving what one learns can change one’s learning journey.

When asked about his plans for the future, Jubair believes in being realistic and staying grounded. The present, according to him is the moment that is to be enjoyed and made full use of. The future will form itself around it.

In the long run though, Jubair wishes to serve the Indian government to make education more accessible for children in rural areas. He believes that if children from lower economic background get an equal shot at education and learning, there is a higher chance of them performing better. For many families in India, the foremost luxury and source of hope is access to good education.

BYJU’S has been the stepping stone for millions of such students by making education affordable and accessible in all parts of the country. At BYJU’S, we believe that a level playground for all students a will enable them learn better and inspire others to do the same.

Special thanks to Akanksha Nidhi for being his mentor from BYJU’S and helping Jubair learn better.

Follow us on Facebook and read our My BYJU’S Story on our blog for more stories from across the country on how BYJU’s is transforming the way children learn in India.