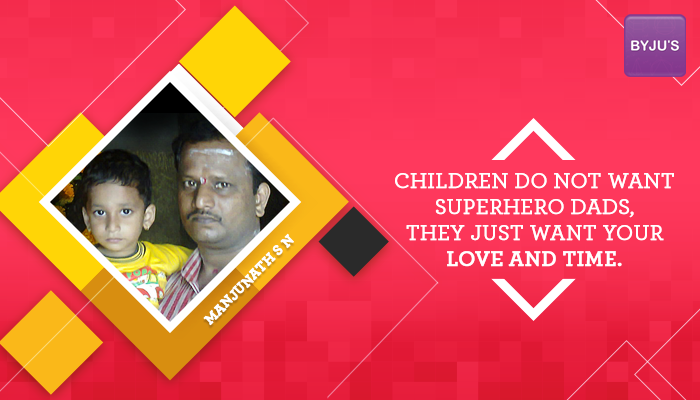 A struggler with a determined heart and an achiever who went through hardships to be in a position which he occupies with gratitude today; meet our BYJU’S superdad Manjunath S.N, the man who fans out the idea of Father’s Day by stating “every day is a Father’s Day when it comes to living up the expectations of our children.”

With 14 years long successful marriage and two lovely children, Manjunath unfailingly shows his true mettle when it comes to work as well as his love for his family. On the special occasion of Father’s day, we asked him how he manages work and family and he politely smiles back saying, “it is only possible because of my supportive family.”

Life in a flash

Manjunath’s journey has been a mixture of ‘twists and turns’ which he welcomed and embraced with open arms. Being the eldest son of a traditional Indian middle-class family, his hands were soon cuffed with t

he encumbrance of their economic state and he quit his education to take up responsibilities. With the hopes of following his father’s footsteps of being a government employee, he took up a degree in Horticulture. But he soon realized that his passion rested in learning and understanding computers which helped him bag his first job as an editorial assistant with a small company.

“I am very proud of the fact that I have learnt almost everything about using a computer on my own. It was a bit difficult in the beginning but a certificate program in computer basics helped me ace it,” he recalls. The best part was the constant support he got from his father, who always encouraged him to have his own will and explore the world.

When it comes to taking care of his family, he is a paragon of a doting son, an ideal husband and a loving father. He is very close to his mother and tries to ingrain the strong-willed personality of hers. 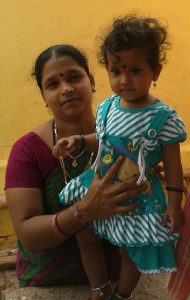 “I have learned a lot from my mother, especially her positive attitude towards life and smart ways of handling any life situations. In fact, these morals have helped me nurture and build a strong and happy relationship with my wife and children.” He further adds, “My mother is a very pious woman, who till date prays every morning before beginning her daily activities. I still remember my childhood days when I used to visit temples with her every evening. Those are some of my most cherished memories.”

Manjunath loves his wife dearly and is very protective of her. He loves the fact that she is so comprehensible and looks after the household chores while taking care of their children and her mother-in-law along with being his constant source of strength. He reminisces about the time when his wife had severe health issues during her first pregnancy and they looked every nooks and corner of the city for a proper treatment. “I was sanguine about the future prospects, and quitting my job, I took my wife to Mysore for treatment.”

He picked up a layman’s job to support his family while attending to the needs of his wife. For them, each passing day was filled with torment and dubiety. After one year of treatments amidst love, hopes and prayers, they were blessed with a baby boy, whom they named as Hitesh. “Luckily my relatives were there in Mysore as a moral support and constant encouragement,” he enunciates with a sigh of relief.

“Early on in my life, I realized that travelling changes the way a person view things. I have travelled across the country, but till date Delhi – our nation’s capital has been my most favorite destination. Delhi’s heritage, culture, food and people will always have a special place in my heart.” recalls Manjunath with a faint smile passing across his face. Manjunath also harbours a special interest in visiting famous Hindu religious sites. His trip to Katra (Mata Vaishnovi devi), Rishi keshi and Haridwar temples with his newly wedded wife tops this. He often takes his kids along and go for long walks or visit Mysore on weekends. 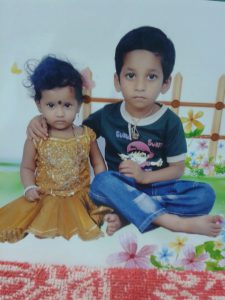 According to Manjunath, every parent is a hero for their children and their emotional stability depends on the examples set by the parents. “Khushi (his daughter) always waits for me to return from work with some chocolate and to hear about my day. This is our daily father-daughter time and the highlight of my day.” She loves to listen to his dramatic narrations and keeps on saying “ennu jaasti kathe hele appa (Tell me more stories dad).” (He laughs).

For Manjunath, weekends are filled with whirlwind activities like taking his children to the park or going on long walks with them. And his work breaks are often translated into family trips to Mysore. “Both Hitesh and Khushi loves visiting Mysore zoo and Chamundi hills. More than anything else, they look forward to meeting their grandparents and cousins in Mysore,” says Manjunath.

After returning from Mysore with young Hitesh, Manjunath was totally agin to join another contract based job. Instead, he was kin to join a job where he could explore his interest and can have a long-term commitment.

And then he got a call from BYJU’S!

“BYJU’S was like a holy grail for me. I was awed by the quick response I got here when I joined,” he beamed with a smile. When he joined the team as an editorial assistant/data entry, it was an itsy-bitsy affair with a handful of people taking care of the staunch growth of the company. “In 6 years I have seen the company grow and the yet the feeling of coming home and meeting my family-like-friends has never dwindled away for once. I am always thankful for that.”

Note to other Fathers

“It is easy to become a father, but it is difficult to live up to the responsibilities of fatherhood,” he remarks.  “Our children does not want us to be superheroes or be the perfect men, they just want us to be present in their life and give them our love and valuable time. Thus amidst our busy lives, we must engage our valuable time with our children and teach them the morals of life as they grow old.”

Author:  Books are Tanaya Goswami’s first love and cheesecakes come a close second. Talking about movies, music, calligraphy, politics, and Elon Musk will get you listed under the friends’ section of her diary. Ever since moving on from her job as an English lecturer, she spends her time at BYJU’S crafting stories filled with emotion and sprinkled with sarcasm. Outside of work, she’s either learning something new (French, most recently!) or is curled up with a book and a cup of coffee. She firmly believes that discovering what you don’t know is the key to knowledge and is constantly working towards improving herself.