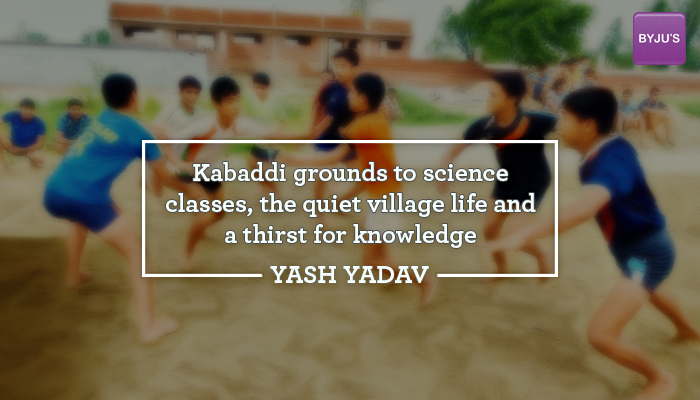 From kabaddi grounds to science classes, Yash Yadav’s life is a unique blend of the quiet village life and a thirst for knowledge

As one travels through the hamlet of Mazhabgarh Suraya in the early hours of the summer evening, the setting sun casts a reddish glow on the dry mud roads and colourful houses. An array of colours and gradients are created and from above these rises a cloud of dust and the sound of youngsters huffing and tugging. On travelling closer towards the outskirts of the hamlet, you come across barren lands that form the fighting grounds for the children of this city who roll around in the mud, pulling each other and fighting till the finish. This is what a regular game of kabaddi looks like. Unlike the Indian champions who play at the international levels, these young boys play in cotton shirts and denim shorts, most of which end up torn at the end of every game. Instead of padded, synthetic kabaddi courts in the Pro Kabaddi league played indoor, these boys mark their courts in whatever empty land they get and battle away with few rules such that only the strongest can win. It is the display of raw power, grit and technique that brings out the winning team and the best player, but this can be achieved only over years of practice. 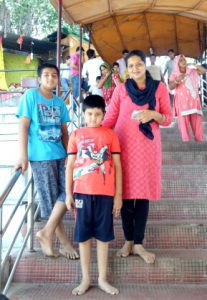 Yash Yadav discovered kabaddi when in his 5th grade. He always felt playing the more popular games like cricket and football was too much of a cliché; so he turned to the lesser known, but internationally recognized – Kabaddi. Grabbing a few of his classmates and neighbours, he started their own version of the game and word spread like fire around their school. A scene similar to the moments in the film “Dangal” enfolded after a few months of popularizing the game- more and more boys came over to watch their matches and soon joined the teams too.

“Kabaddi may not be a very popular sport in schools right now, but it did emerge from the rural grounds of India. I love the energy that goes into the game- the shouts of excitement, groans of disappointment and laughs of silly bloopers, all of them combined into a single game make it the most exhilarating play of the century,” quotes an excited Yash.

Studying in the corner most class room of their school building, 7th grade at Notre Dame School, Yash often finds himself staring out of the window at the little children playing and prancing around. He hopes to inspire them some day to follow him into the world of Pro- Kabaddi and the. Talking about whether he plans on taking Kabaddi on a professional level Yash says, “After reaching its international fame- there is so much more potential in the game and the level and popularity has increased to such an extent that it can no longer be considered a simple road-side game. It would be ideal to open up a kabaddi centre in the village and coach the young boys and see a prodigy emerge from them. But it is still just a dream as of now.” 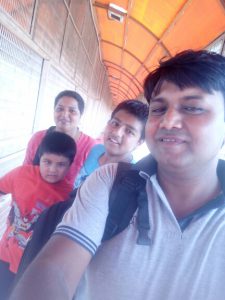 A regular user of the BYJU’S app, Yash believes he is one of the very few boys in his class who love the biology section of science. Science with its reasoning and logic, gave him a better understanding of how his muscles and bones function when playing. Once he studies a topic, it opens a new window for him from where he can look at the world from a new perspective. “Boys in my class think biology is a subject for girls, I don’t understand why they think. But my mother is a science teacher in the same school, she has always coaxed me to read up and understand every chapter in every science subject. Once you get into the flow, you start to enjoy all the subjects, and that’s how I fell in love with the Biology section of science.”

Yash’s mother has always made sure that she never gives extra attention and assistance to her son; Yash as she believes it will give him an undue advantage over the other boys in school. The app had been sufficiently informative and had elements like sound and visuals which made her son learn concepts much faster. When asked about his performance and experience with the app, Yash’s mother states, “ It’s amazing that technology has come so far that we are able to leave regular textbook learning and enter a stage where children can use all their senses and learn. I help my younger son, Nishchay with his studies but I am sure if he starts using the app, he won’t feel the need for any extra help. Yash sits with the app for about an hour each day after an hour of watching TV. His mind is usually fresh after that and he picks up topics almost instantly, all I need to do after that is to test him and the chapter is complete.”

On a regular day, Yash’s time is scheduled to the last minute to keep him engaged with different activities and to discipline him. His father allots an hour each for watching TV, playing, watching the news, dinner and using the app. His father inculcated in him, the importance of balancing studies with sports, thus along with his dreams of being a Kabaddi player and following his idol, Anup Kumar, Yash also looks at Biology as a good field to explore further. “Maths and sciences are my favourites but I can’t help but love Biology topics more. The examples, explanations and variations given in the app make every chapter a new experience. It is amazing to see the different locations where the videos have been shot, which means that they actually put in so much effort into making a single chapter. No chapter or example is ever the same as the previous one,” divulges Yash.

A strapping young boy, Yash is an example of one of the million students we attempt to reach out to and inspire to learn better. BYJU’S is on the run to make sure their dreams become a reality driving them from their villages to inspire the world.

Special thanks to Akansha Nidhi for being his mentor from BYJU’S and helping Yash learn better.

Follow us on Facebook- BYJU’S IMPACT and read our My BYJU’S Story on our blog for more stories from across the country on how BYJU’S is transforming the way children learn in India.

About the Author : Ankita Dutta is a STORYWEAVER at BYJU’S. Avid reader and writer by day, a classical singer by night, Harry Potter nerd, a film aficionado, and the classroom joker in her yesteryear. Ankita believes that words can influence to a point where they change personalities and ideologies. Wish to contact her about intriguing debates, writing trends and stories? Drop in a mail to teamstoryweavers@byjus.com