We are nowadays in the age of graphic information where visuals play a large role in every bit of life. As 65 percentage of the populace is comprised of visual learners, images are undoubtedly crucial for engaging the public in e-Learning courses.

Moving and still graphics have been incorporated in learning resources for decades, but only now has high-resolution screens, cellular networks, and faster broadband have amplified the possibility for high-quality visuals to be a part of e-Learning graphic design. Striking interfaces made up of videos, photos, diagrams, maps, illustrations and charts are slowly replacing text bound courses.

In this column, we will excavate down into some facts to further convince of why e-Learning developers should include visuals when fashioning their courses. 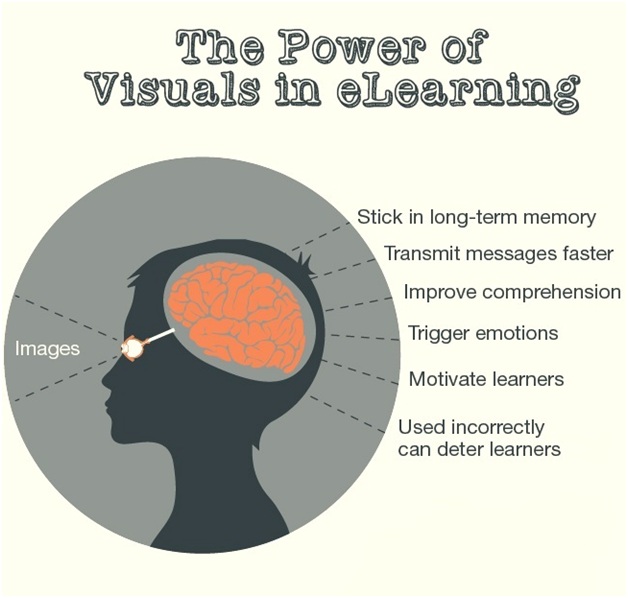 The short-term, as well as the long-term memory accumulate information in pieces, but the earlier one is limited. One of the simplest ways to confirm that scholars store data in their long-term memory is to couple concepts with very meaningful pictures. Study has found that this approach increases memory more than when courses distribute information through auditory or written form. Graphics help individuals make sense out of the material and direct attention, amplifying the likelihoods that the scholars will remember.

All this points out that human beings process graphic information more competently than text.

Graphics have been seen to increase learning by up to 400%. Also, they impact learners on a cognitive level and stimulate imagination, consequently, enabling users to process the data faster. Our Grey matters are pre-wired to interpret robotic ally connections between objects, permitting for almost prompt understanding with negligible effort making graphics one of the supreme approaches for education in the present days.

Further,research has found that visuals, for instance, graphic organizers increase performance in regions including:

Visuals create a quicker and stronger feedback than text. They aid users in engaging with the material, and such emotive reactions impact their information retaining abilities. This is as the visual memory is programmed in the medial temporal lobe (of our brain), the same place where sentiments are managed. The brain is arranged in a manner that emotional response and visual stimuli is effortlessly connected, and collected, the two form memories. Negative visual portrayals are mostly useful for sending a strong emotional impact.

About 40 percent of scholars retort positively to visual stimulus than text unaided. Simply observing an image permits its users to reconstruct the understanding in their brain. e-learning experts can benefit from this by conveying stories in their courses through captivating images and absorbing videos.