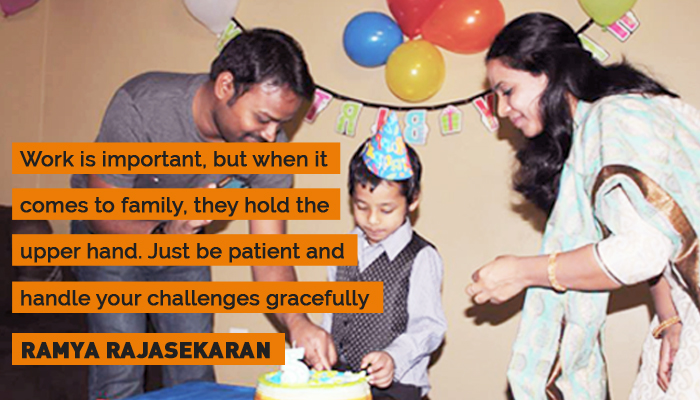 “Work is important, but when it comes to family, they hold the upper hand. Just be patient and handle your challenges gracefully” – Ramya Rajasekaran

In today’s world, women are the stealth engineers who work as expert craftsmen in balancing their family and careers simultaneously. Be it Richa Kar, the singular mind behind Zivame, Priscilla Chan, co-founder of Facebook and a philanthropist, or our very own Ramya Rajasekaran, former lawyer and a mentor at BYJU’S.

Ramya is a mentor for many young and blooming minds at BYJU’S. Being the mother of an active seven year old helped create the platform required for interacting with children. Over the months that she has been working as a mentor, Ramya has grown to adore children and understand them, a skill she has used to understand and interact with her son at home. She believes that she is in the best phase of her life right with her husband and her family supporting her constantly. 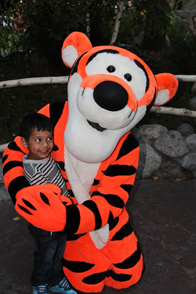 As a young girl from Chennai, Ramya fell in love with books early on in life which fed the need to know more at every step of her life. The turning point of her life came when she saw her lawyer aunt donning the famous black coat for work. This sparked her desire to study law and explore this field. A strong headed and determined woman, Ramya grew up to become a successful lawyer and bagged many winning cases under her belt. The most memorable moment of her life was when she helped a financially backward client get justice in a hit and run case a few years ago. “Being truthful to the world around us is as important as being truthful to ourselves. The world of lawyers is surrounded with distractions and falsifications. From this I have learnt the importance of being steadfast in my beliefs and being truthful. I want my son to learn the same in order to be successful in life and respectable in society,” shares Ramya.

Throughout her life, Ramya has had only one role model- her own mother. She says, “My mother was always very compassionate and caring. Out of the many lessons she taught me, the ones which I still try and include in my everyday life are- patience, and the importance of being optimistic in life. Being a mother is tough, but with the support of family, the journey becomes less of a burden and more of an experience. My mother was with me through my initial motherhood days. She still continues to be my main source of motivation and advice- a real Supermom I should say,” states Ramya laughing.

After marriage, she quit her practicing law  and moved to Bangalore with her husband. She was warmly welcomed by her huge family and was soon blessed with her son, Sanjay too. She says, “Sanjay came to my life as a good luck charm”. With him, she understood the true meaning of motherhood. Even the compatibility level and understanding with her husband increased, making them the closest of friends. After settling in Bangalore Ramya started her career at Accenture, managing household responsibilities and her infant at the same time. Unfortunately, things didn’t work accordingly when her three month old son fell ill and was diagnosed with Hydrocephalus, a condition where the fluids from the brain do not drain out at birth. She recalls, “I panicked and had lost all faith, thinking I might lose my son forever”. She immediately quit her work and devoted her entire time to her son and other household activities.  After two unsuccessful attempts, the doctors finally managed to mitigate the effects of the condition. “His body is not very strong and he falls ill frequently,” she says “but he is strong willed and enthusiastic about everything in life. He understands everything and is very matured. I am proud of him.” This she claims after recalling a funny incident which took place four years ago.

She says, “Sanjay was a three year old toddler. My husband and I  had taken Sanjay for an  evening stroll and we suddenly lost him in the crowd. We panicked at first but soon saw him happily playing with his red balloon bobbing . Later on, the caretaker with whom Sanjay was standing gave us an incredible description of how he went up to him and described his parents and that he was lost. That day I realized that my son is a fighter and he’ll find his way out even in a crowd”.

When asked about her decision to re-join work Ramya divulged that her faith in a corporate world was reinstated after BYJU’S recognized her talent and hired her four months ago. “The best thing about working at BYJU’S is that I have a very flexible work hours which allows me to take care of my son, look after my in-laws and also fulfill my passion for mentoring. Since I joined BYJU’S, I was allowed to work from home which was a stepping stone for me to return to a professional career.” Her advice to other young mothers is to ‘be an achiever at work and a good mother at home’.

This Mother’s Day, we salute mothers like Ramya, who influence the industry with their dedication and motivate their colleagues with their optimism. We thank their mothers, from a generation past, who encouraged them and gave them the freedom to follow their dreams and set the base for a future of amazing Supermoms.