An accidental discovery that revolutionised medicine

Have you ever tried creating shadow figures using just your hands, a flashlight, and a wall? Perhaps it was a barking dog, a swimming fish, or just a happily wandering butterfly? Or perhaps you have donned a magician’s hat to show how your palm can flash out red lights when placed above a flashlight? If so, then you already have some experience in the phenomenon of dispersion of light.

What is the dispersion of light?

When white light is passed through a glass prism, it splits into its spectrum of colours (in the order of violet, indigo, blue, green, yellow, orange, and red). This process of white light splitting into its constituent colours is termed dispersion.

This same phenomenon worked in both cases. In the shadow puppet activity, your hand absorbs most of the visible white light, casting a shadow on the wall. As for what happens when you place your palm over a flashlight, your palm, being closer to the source of light, is unable to absorb all the colours. Red light, having the highest wavelength, passes through your palm, while the other colours are either absorbed or reflected by the cells of your body. If you slowly move your palm away from the flashlight, you can see the red light disappearing and the growing shadow of your palm appearing on the opposite wall! 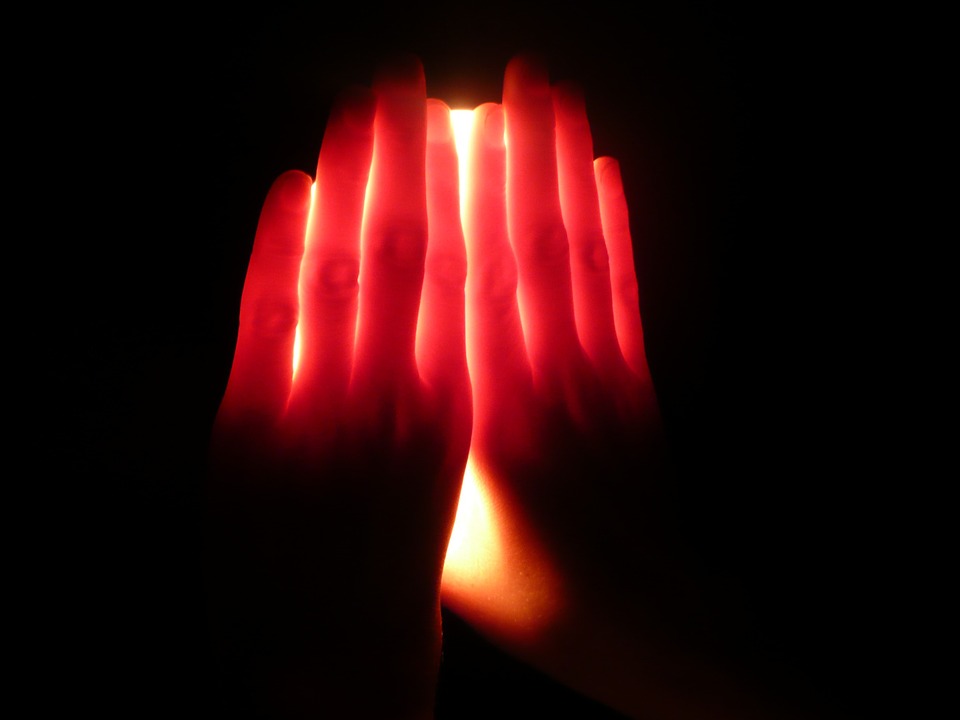 The same theory is used on an X-ray machine.

X-rays are light rays that easily pass through your skin, fats, and muscles. But a lot of its energy gets blocked by your bones, which is why you can see even the tiniest bone clearly in X-rays.

But unlike most of the discoveries and inventions that were made to fulfil a purpose, the discovery of X-rays was purely unintentional.

Read the interesting #originstory of the birth of an X-ray machine.

It happened by chance!

Around 125 years ago, Wilhelm Conrad Rontgen, a German physicist, was working in his lab at Wurzburg. His subject of interest was focused on light phenomena and other emissions generated by discharging electrical current in ‘Crookes tubes’(glass bulbs invented around 1875 that had positive and negative electrodes). He was particularly interested in cathode rays. (Cathode rays are a beam of electrons travelling from the negatively charged cathode to the positively charged anode at the other end of a vacuum tube.)

The scientist wanted to test whether cathode rays could pass through the Crooke tube when the entire air inside the tube is evacuated. When he exposed the tube to a very high electric voltage, he noticed the tube emitting fluorescent light. That’s when an idea struck him and he covered the tube with black paper. To his surprise, he noticed that a barium platinocyanide coated screen on the other side of his laboratory started to glow.

Roentgen worked out that the tube was emitting some unknown invisible light or radiation that could pass through much denser particles (in this case, the black paper). He investigated further and found that the radiations were produced at the edge of the point of contact of the vacuum tube and did not show any deflections when interfered with a magnetic field.

This newfound theory piqued his curiosity further, and he kept experimenting more with the mysterious radiation. He even enlisted the help of his wife for his first X-ray photo and successfully captured the photograph of his wife’s hand bones. But he did not know what the radiations were coming from or even what to call them. Hence, he called them ‘X,’ meaning ‘unknown,’ rays.

Soon Roentgen’s discovery gathered much attention in the scientific community and among the public. Numerous honours and awards were showered upon him, including the Nobel Prize for Physics in 1901 and the naming of the element Roentgenium (Rg) after him in the year 2004.

Roentgen’s research paper on ‘On a new kind of ray: A preliminary communication’ altered clinical diagnosis. The technology became an essential part of most types of diagnoses including bone damages, bacterial infections like tuberculosis as well as in major operations like removal of tumours, brain surgery, etc. 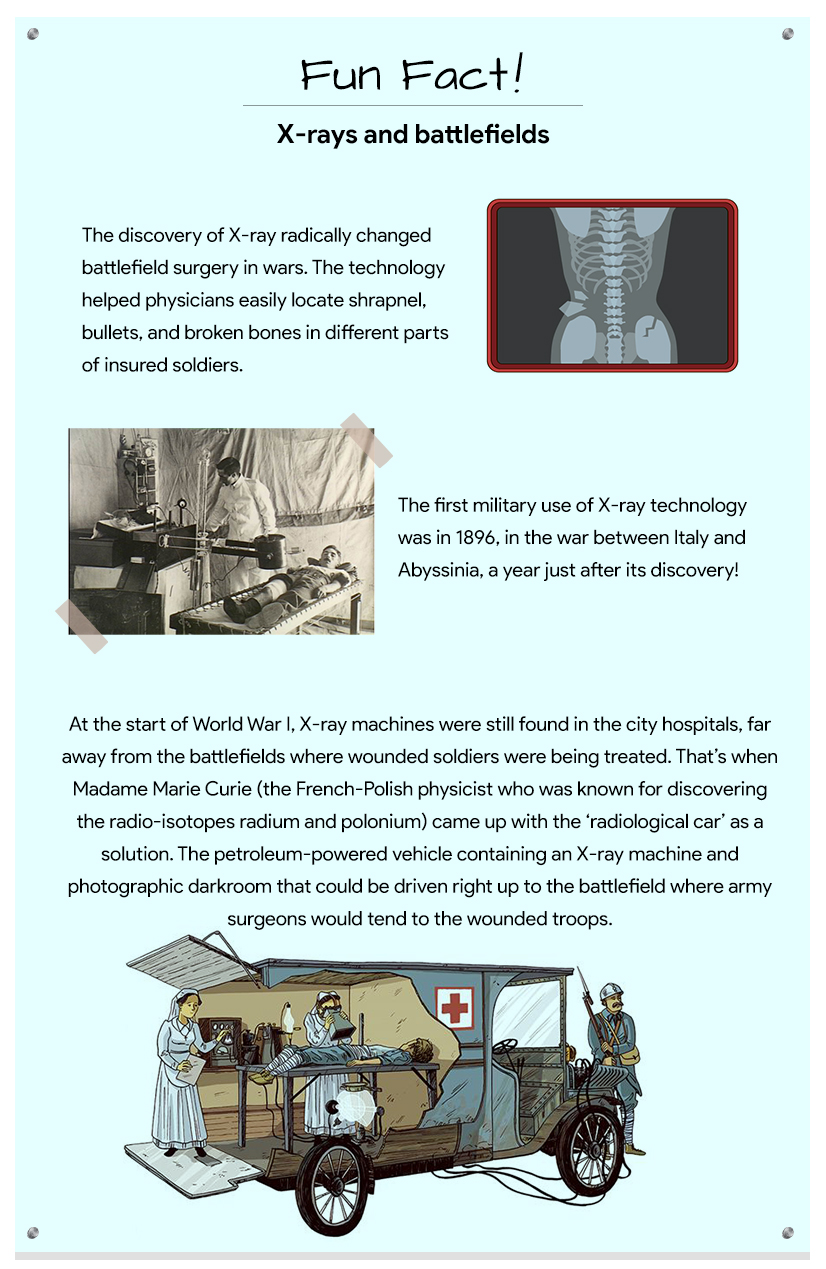 The Good and the Bad

It is said that every light has its shadow. The same was the case with X-ray. It wasn’t long before X-rays revealed their dark side. In 1897, the initial reports on the dangerous effects of exposure to X-rays began to appear: hair loss, skin burns, and even cancer. In 1904, Thomas Edison’s assistant, Clarence Dally, who had worked extensively with X-rays, often experimenting on himself, died of skin cancer. This caused several scientists (including Thomas Edison, Nikola Tesla, and William J. Morton) to begin taking the risk of X-rays more seriously.

Over the years, several protocols have been developed to minimise the extensive exposure to these rays on the human body. For instance, the medical field uses a lead apron or other shield to protect patients from unnecessary radiation exposure. Another possible way of minimising the exposure to these harmful radiations is replacing old x-ray machines that have passed their prime with new ones, as the radiation emitted by old x-ray equipment is at least 20-30 times higher.

Gradually, these electromagnetic radiation forms found their way beyond doctor’s offices, clinics, and battlefields, to other fields like border security, astronomy, airport security scanning, and many more. Scientists are also trying to combine x-ray with laser to study biological reactions and x-ray with microscope to pioneer new ways of visualizing cellular structures.

That was the origin story of the accidental discovery of X-rays.

Awesome, I don’t know how to express how important these are??
They are so much interesting for me in particular!!
Thanks byju’s