What do you do when a cute little stray cat visits your home regularly? You leave out a bowl of milk for it, right? It is common knowledge after all that cats love milk. We’ve seen it in movies and cartoons like Tom and Jerry. The classic image of an adorable little furball hunched over a saucerful of milk happily lapping it up is one that is hard to resist. But sometimes, common knowledge can backfire! The truth is that milk (at least cow’s milk) is one of the worst things that you can feed a fully grown cat. Let’s understand why.

We know that all mammals, including humans, drink their mother’s milk when they are young to get nutrition. This is because, in their infant stage, mammals cannot fend for themselves and rely on the care of their parents until they are of an age where they can support themselves. This is the same with cats and kittens too.

From the time a kitten is just born to the time it is about six weeks of age, kittens rely primarily on their mother’s milk for all their nutritional needs. After six weeks, the mother cat slowly discourages the kittens from feeding by nudging them away and sometimes by even hissing and scolding her own babies! This process is called ‘weaning’ and marks the end of the duration where kittens need milk to grow strong. 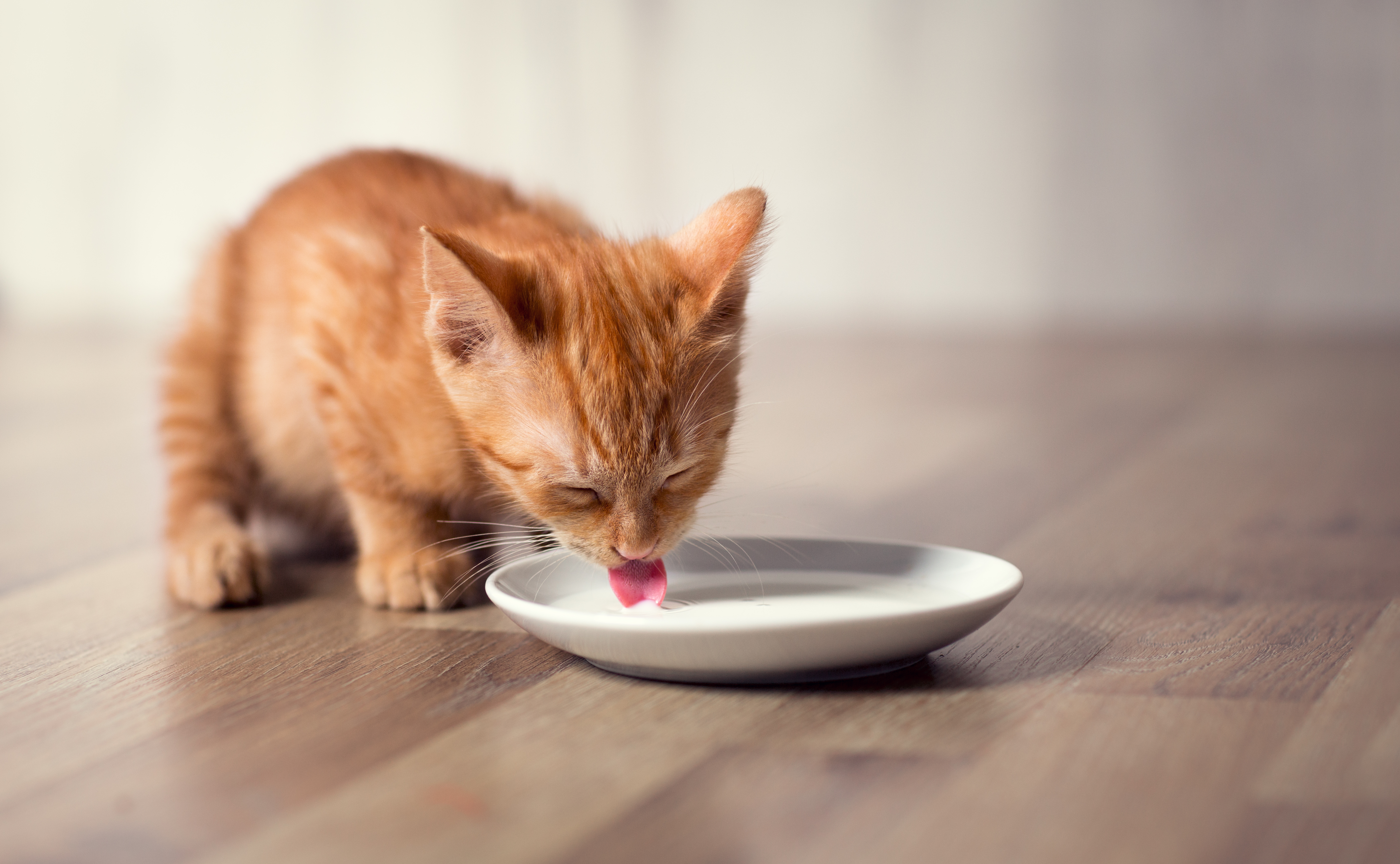 The classic image of an adorable little furball hunched over a saucerful of milk happily lapping it up is one that is hard to resist! (Image: Shutterstock)

After this stage, if in the wild, the mother will hunt small rodents and birds and bring it back to her kittens until they learn to hunt for themselves. When it comes to domestic cats, kittens that are six weeks and older are introduced to cat food or small chunks of fresh meat. It is important to note here that cats are carnivorous creatures. Unlike dogs, who are omnivores, cats’ bodies are designed to gain nutrition only from meat. But what about milk?

To understand why adult cats don’t need milk, we need to take a look at the science of what happens when a cat drinks milk.

When we say milk, we are usually referring to cow’s milk or buffalo milk. Milk is a highly nutritious substance packed with fats, proteins, vitamins, minerals and sugars. One of these sugars found in milk is called ‘lactose’. Lactose is a ‘disaccharide’, which means it is a complex sugar made up of two simpler sugar molecules – in this case, glucose and galactose.

Our bodies (and cats’ bodies too) don’t process lactose naturally. Lactose is broken down into its simpler sugar molecules with the help of an enzyme called ‘lactase’. This enzyme is found in ample amounts in the digestive system of baby mammals. So both human babies as well as kittens have plenty of lactase in their digestive tracts. This lactase acts on the lactose molecules in milk and helps break it down into simpler sugars that the kitten can then digest. But as the kittens start getting older, they slowly stop producing lactase altogether. And the momma cat knows this, which is why she discourages kittens from drinking milk after they are around six weeks old.

Without the enzyme lactase, the lactose in milk is not broken down and accumulates in the intestine of the cats. Now there are some bacteria in the gut of a cat that can break down lactose but this process releases a lot of gases and causes the cat’s digestive tract to fill up with water. This can lead to diarrhoea, stomach infections and other serious illnesses. This inability to digest milk properly is called ‘lactose intolerance’.

But if an adult cat can’t drink milk, how come adult humans can? Humans are special in this regard. Many of us continue to produce the enzyme lactase well into our adult lives. But not all adult humans can safely consume milk. Did you know that roughly 65% of the people on Earth are actually lactose intolerant to some degree? The thing with lactase is that once the body stops producing it, it never restarts ever again. This is why some humans can also pick up the condition of lactose intolerance well into their adult life.

But if cats can’t digest milk properly, why do they love it so much? Well, we humans do this all the time! Chocolates and sugary snacks are not the best eating choices for us but we still eat them anyway because they taste good. Cats love foods that are high in fat and protein content and milk has both, which makes it a very attractive option. A cat doesn’t worry about what’ll happen two hours after it drinks the milk, it’s just concerned with how good the milk would taste right now!

So the next time you are visited by a feline friend, make sure that you don’t give it any milk. It would do more harm than good. You could offer it a small amount of fresh fish or chicken, and if you belong to a vegetarian household, it’s best to stick to pre-packaged cat food.

Did you enjoy reading this? For more interesting reads, head over to the Learning Tree.

Are lie-detector tests telling the truth?

Thanks for the information…

Thanks for the information 🤔🤔

> Can You Heat a Building With Your Body Heat?

> Raining cats and dogs, yes! But why do fish fall from the sky?

> Did you know about these ‘nature’ inventors?