Masters of stealth: Animals Who Are Nailing April Fools’ Day

April Fool’s Day marks a time when pranking, trickery and deception are considered okay, and even encouraged, provided they’re done harmlessly and in the right spirit. For wild animals though, April Fool’s isn’t a ‘one day event’. Many  species have been ‘pranking’ each other as a way of survival for ages and they do so in several different ways.

Pranking in the animal world is done most often with camouflage. Camouflage is a defense mechanism or tactic that organisms use to disguise their appearance, which usually includes blending in with their surroundings.

Let us present to you just a few of the ultimate pranksters in the animal kingdom and the ways in which they fool us (and one another). 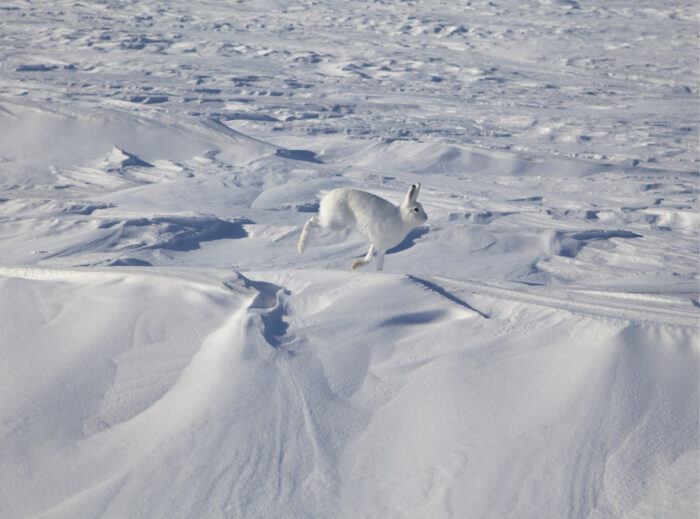 This white rabbit’s disappearing act is no magic trick! The Arctic Hare is also known as the polar rabbit because it lives way up north in the Arctic Tundra. That’s why the Arctic hare grows white fur, to blend into the snow.

However, it’s not always shivers and frozen paws for the Arctic hare. In the summer months when the snow melts, it sheds its white fur and becomes brown, to match the underbrush. This makes the Arctic hare’s camouflage uniquely adaptable to the seasons. 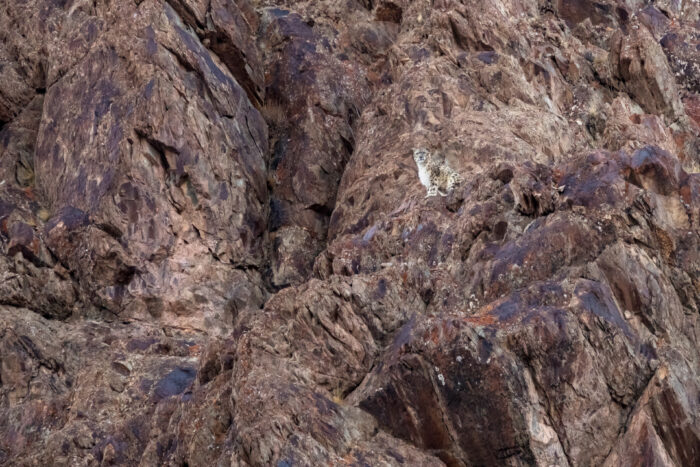 Can you spot the leopard?

In the barren mountains of India’s high-altitude Himalayas a stealthy, elusive predator roams. So difficult is it to spot a snow leopard, even for experienced trackers, that it is often called the ‘grey ghost of the mountains’. The snow leopard lives in dry, freezing climes, at altitudes upwards of 3,000 m. One would expect that with sparse vegetation comprising only grasses and shrubs, a large cat with a muscular frame and long tail would be easy to spot.

But the snow leopard is a masterful camouflage artist, adapted to survive and merge into the forbidding terrain it inhabits. It conceals itself cleverly among craggy rocks and deep gorges. The colour of its thick and warm coat of fur ranges from ash-grey to pale-white, patterned with dark spots, helping it merge perfectly with the arid, rocky mountains. The long, bushy tail provides extra balance on the steep slopes. 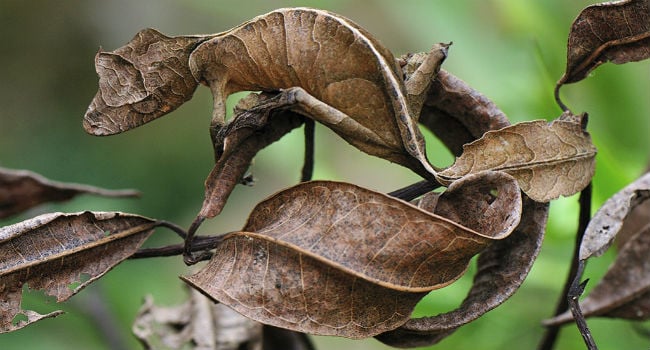 No other animal camouflages as excellently as the Leaf Tail Gecko. With its leaf-like flat tail, spine-filled head and body, the gecko blends so well against tree branches that it’s almost indistinguishable. These nocturnal predators can only be found in Madagascar.

They also possess the ability to camouflage with the colors of their environment, as well as the shapes and vegetation of the forests they inhabit. With these adaptations, leaf-tailed geckos can almost completely camouflage against dry leaves or the bark of trees. 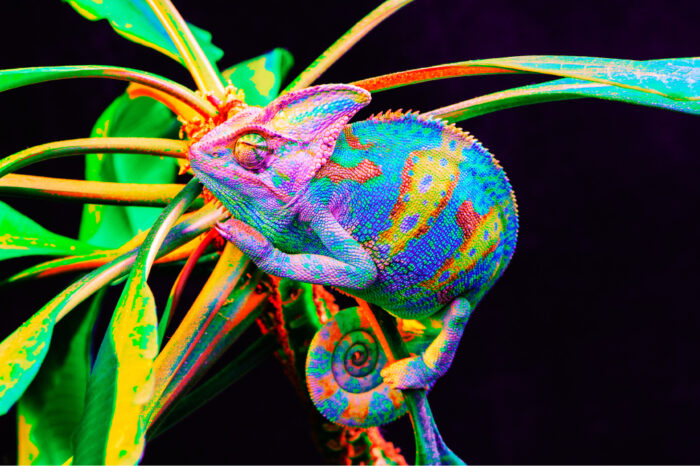 How could this list be complete without mentioning the Chameleon! They are synonymous with camouflaging.

So why would they want to change colours? Scientists believe that chameleons change colour to reflect their moods. By doing so, they send social signals to other chameleons. For example, darker colours tend to mean that a chameleon is angry. Lighter colours might be used to attract mates.

Some chameleons also change colours to help their bodies adjust to changes in temperature or light. For example, a chameleon that gets cold might change to a darker colour to absorb more heat and warm its body. 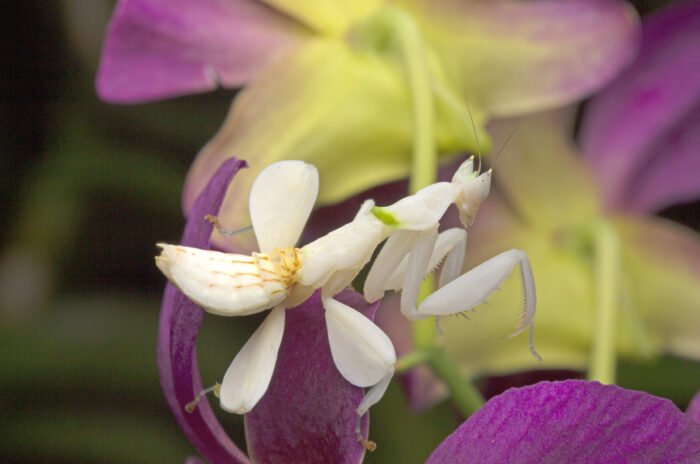 The orchid mantis might look like a beautiful rainforest flower but it’s really an insect, and a carnivorous hunter at that!

The flowery camouflage actually helps attract small flies who unknowingly land on the orchid mantis, where it’s waiting to catch and eat them. That means the orchid mantis never has to leave its house for dinner — it gets insect takeout delivered every night! Orchid mantis can be mostly seen in Western Ghats of India.

The undisputed master of disguise 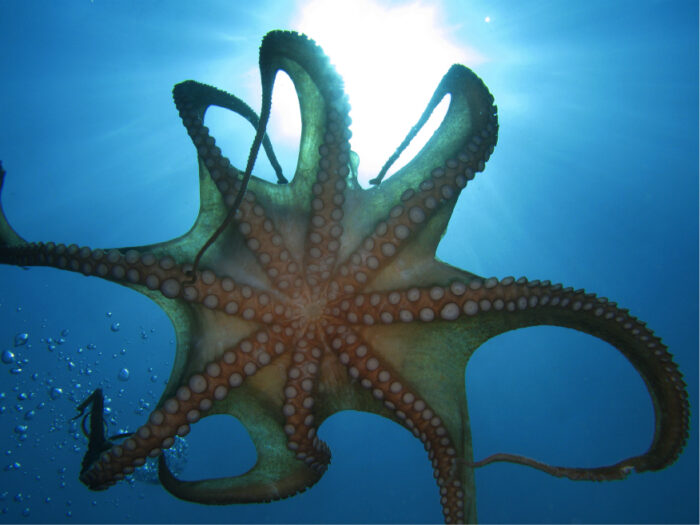 When it comes to surviving the wildlife, sometimes the best defense is the best disguise. Equipped with shape shifting and colour changing capabilities, many creatures have evolved to become amazing at  camouflaging themselves

Still, one species has proven to far surpass the rest in its mastery of disguise: the mimic octopus.

The mimic octopus has disrupted all preconceived scientific notions about the limits of mimicry. Mimic octopus is the first animal ever discovered to regularly adopt the appearance and behavior of more than one other organism.

The mimic octopus, in its normal state, can measure to be about two feet long, boasting brown and white stripes and spots. However, they rarely stay looking like an octopus for long. In fact, the tentacled shape-shifter has been so adept at not being an octopus, it succeeded in eluding human discovery until 1998. 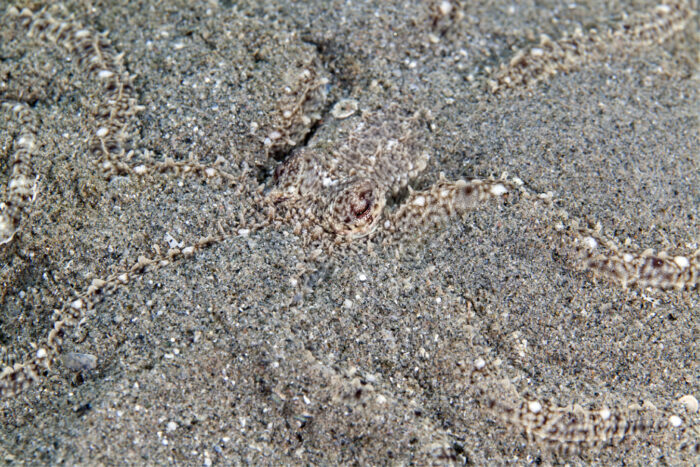 Even at the baseline, all octopuses are masters of stealth. Because they don’t have skeletons, octopuses are expert contortionists, easily manipulating their many limbs to squeeze into tight areas or alter their appearance. On a whim, their skin can change from slippery and smooth to bumpy and jagged within seconds. Plus, thanks to the expansion or contraction of chromatophores in their cells, octopuses’ pigmentation can quickly shift pattern and shade so as to match the surrounding environment. What sets the mimic octopus apart from its fellow octopuses is not just its incredible costumes, but its unmatched acting chops.

Like all great actors, the mimic octopus caters to its audience. When confronted by a hungry predator, the mimic octopus may pretend to be a venomous lionfish by arranging its eight tentacles to look like the fish’s striped spines.

Or perhaps it may flatten its body out completely so as to look like a stingray. 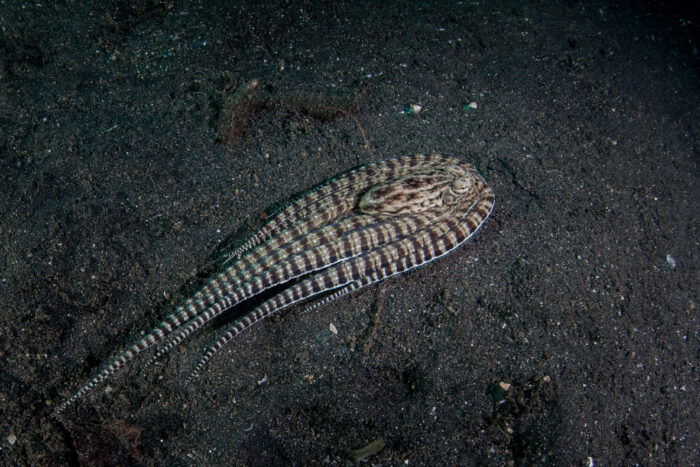 If under attack, the octopus may imitate a toxic sea snake, burrowing its head and six of its tentacles underground and twisting its remaining limbs like a snake.

The mimic octopus has also been observed impersonating seahorses, starfish, crabs, shrimp, and jellyfish. Some of its costumes haven’t even been pinned down yet. 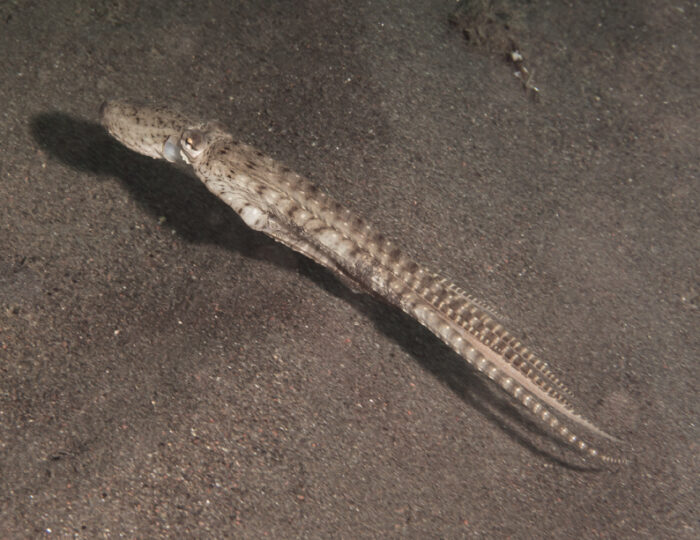 The mimic octopus has brilliantly figured that by disguising itself as more threatening animals, it can more freely and safely travel throughout its underwater home. With an ocean of vibrant disguises at its disposal and no other species capable of such mimicry, the mimic octopus sure are the masters of disguise!

Tell us which is your favourite animal that can absolutely fool us. And hey, Happy April Fool’s Day!

The leaf tail gecko and the second octopus were tricky🤔

I love byju’s articles…
Provides so much information
❤️❤️

The snow leopard one pic is awesome…
Really Osum!!!