Decades after exploring the barren surface of Mars from millions of kilometres away, humans will soon get their hands on bits of the Martian surface thanks to an SUV-sized astrobiologist rover on the Red Planet. The rover — Nasa’s Perseverance — has now successfully collected, processed and sealed the first samples from the Martian surface to be brought to Earth for deeper analysis.

The rover, which collected the material from the inside of a rock, beamed back the confirmation to Nasa’s Jet Propulsion Laboratory (JPL). The core is now enclosed in an airtight titanium sample tube, making it available for retrieval in the future.

Where is NASA’s Perseverance rover now? 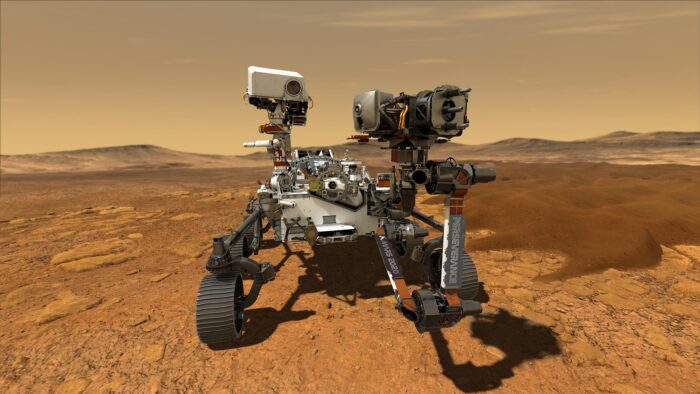 Nasa’s Perseverance robot landed in Mars’ Jezero Crater in February 2021. Jezero Crater is a deep, 45 km-wide depression, some 20 degrees north of the planet’s equator, which scientists believe may have held a lake billions of years ago.

Because of this, scientists think Jezero’s sediments may hold traces of ancient microbial life – assuming biology ever took hold on Mars.

The Perseverance rover has been trundling on the surface of Mars to look for signs of ancient microbial life. From its touchdown location, the robot has driven more than 2km to a slightly raised ridge nicknamed ‘The Citadelle.’

What is the Mars Perseverance rover looking for? 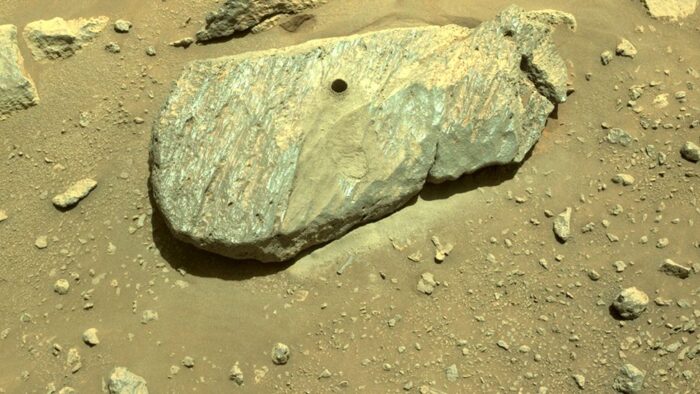 An image taken by the Perseverance rover on Mars shows a rock called Rochette with holes where the rover obtained its first two samples. (Image credit: NASA)

As mentioned above, one of the primary missions for NASA’s Mars rover, Perseverance, is looking for evidence of past life. Some of that evidence could be hidden away deep inside of Martian rocks.

That’s what led Perseverance to drill into one particular briefcase-sized rock and, for the first time during its still-young mission, collect a core sample. The sample gathering began on September 1, when the drill at the end of Perseverance’s robotic arm pierced into a Mars rock nicknamed “Rochette.”

Images and data that NASA received confirmed that the rover’s first coring attempt was a success.

Both Nasa and the European Space Agency (ESA) are planning a series of missions to bring back these samples to Earth. The rover is tasked with gathering more than two dozen such samples over the next year or so. These samples are scheduled to come home later this decade.

How was Perseverance NASA able to collect the first Martian sample? 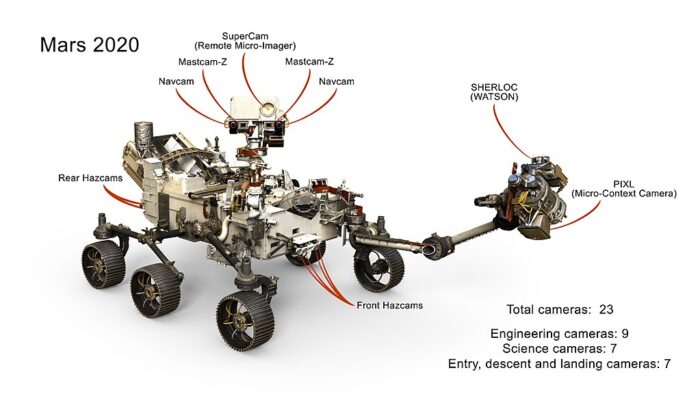 There’s a whole process that starts with a more superficial look at the Mars surface. Perseverance is fitted with several tools for interacting with the environment, including a Rock Abrasion Tool (RAT). It is a high-speed grinder with brushes to remove that weathered outer layer of rock and clear away dust.  Perseverance also has another tool called Gaseous Dust Removal Tool (GDRT) that, as its name suggests, clears away the dust at the site where the rover is working.

This first part of the process allows the rover an opportunity to use some other built-in instruments to examine the targeted rock even more closely. The data gathered from there helps NASA engineers on Earth to decide if it’s worth moving on to the next step of trying to obtain a core sample.

This was not the first attempt of the rover to collect Martian samples. In August, Perseverance made its first attempt to core a Martian rock. Things didn’t quite go according to plan that time, as NASA explained later.

While the rover’s seven-foot drill successfully bored its way into the rock and seemed to come away with a sample, images beamed back to Earth showed an empty storage tube. Unfortunately, that revelation occurred only after the tube was sealed and stored for future retrieval. It turned out that the rock itself wasn’t the best candidate for coring.

For the most recent attempt, which appears to have been a success, the NASA team back on Earth learned from their earlier experiences. This time, they used one of the Perseverance rover’s onboard cameras, Mastcam-Z, to snap an image of the sample tube before sealing it away for storage.

Again heeding the lessons of the first coring attempt, NASA isn’t quite ready to call this coring operation a total success. Before the tube gets sealed off for storage, the Mastcam-Z will go to work once again “at times of day on Mars when the Sun is angled in a more favourable position.” The hope is that a new crop of images taken in a different light will offer a clearer look into the sample tube.

It’s going to be some time before the samples collected by Perseverance are actually safely ensconced on Earth. If all goes according to plan, the rover’s bounty will arrive here sometime in 2031 at the end of a three-stage “Mars Sample Return” (MSR) mission.

Besides Perseverance, are there any rovers on Mars?

Over the years, NASA has sent five robotic vehicles, called rovers, to Mars. The names of the five rovers are Sojourner, Spirit, Opportunity, Curiosity, and Perseverance. And NASA’s fifth Mars rover, Perseverance, landed on the Red Planet in February 2021!

Why are rovers so important? Since the 1970s, scientists have been sending spacecraft to Mars. Several different types of spacecraft have been sent to the Red Planet over the years, and they all have different specialities. One type, called orbiters, trace an orbit around Mars, taking pictures as they zoom around the planet. Other spacecrafts, called landers, provide photos and information from their landing spots on the surface of Mars. These inter-planetary rovers have wheels and specialize in moving around. They land on the surface of Mars and drive around to different spots along their missions.

Rovers help scientists in their quest to understand what different parts of the planet are made of. Mars is made up of lots of different types of rocks, and each rock is made up of a mixture of chemicals. A rover can drive around to different areas, studying the different chemicals in each rock. These chemicals can tell scientists something about the environments that changed that rock over time.

Mars is a fascinating planet. It’s icy cold and covered in reddish dust and dirt. Like Earth, it has volcanoes, gullies, and flat plains. Scientists can also see channels that look like they were carved by rivers and streams a long, long time ago. In order to learn more about Mars and the missions related to Mars, check out these amazing stories below.