Tell Me Why #2: Why can’t humans grow wings?

Presenting our new series – ‘Tell Me Why…’ where we explain to you the ‘why’ behind anything and everything that’s been on your mind! So go ahead and ask us a question that starts with ‘Tell Me Why’. We’ll pick the most intriguing questions and feature them along with an illustrated answer on The Learning Tree Blog.

To ask your question, fill up the form here:

Today we are answering a very interesting question asked by class 10 student, Abhishek Sharma from Ballia. He wants to know, 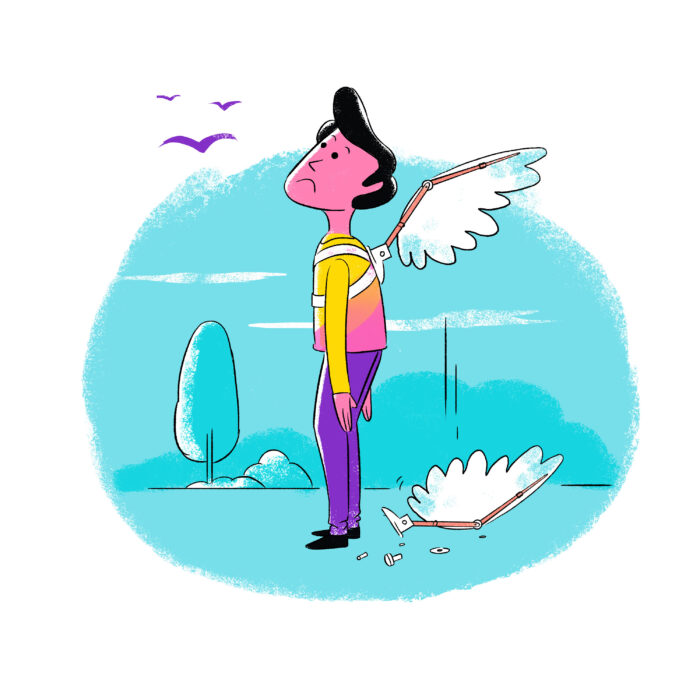 The reason being humans are vertebrates. This means we belong to a group comprising species that have backbones. The others in the group include fish, amphibians (such as frogs), reptiles, birds and mammals.

A long time ago, humans did not exist on the planet. One of the most significant events in the history of life was when fish evolved into tetrapods, crawling out of the water and eventually conquering land. The term tetrapod refers to four-limbed vertebrates, including humans.

To complete this transition, several anatomical changes were necessary. One of the most important was the evolution of hands and feet.

The origin of hands in land vertebrates is hotly debated. But researchers from the University of Quebec and Flinders University in 2010 suggest that human hands likely evolved from the fins of a fish that lived more than 380 million years ago.

These extremely slow changes happen to all species over a period of millions of years, in a process that we call evolution. Every part of the human body, and every other animal or species, evolved in this way. 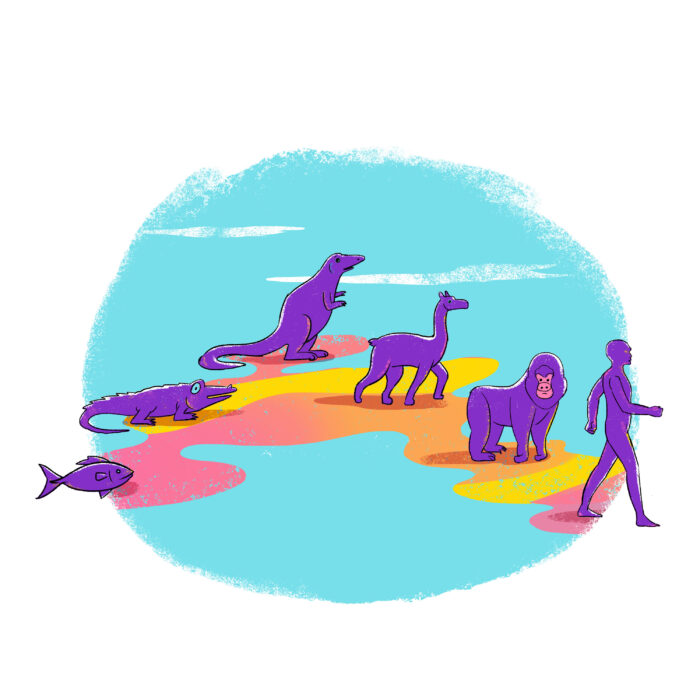 Fishes were the first vertebrates to have pairs of limbs, now called as fins, located both at their front and back. For humans, the limbs are our arms and legs.

A long time ago, some fish evolved with bones in their fins, and that would later become human fingers. This pattern of having pairs of two limbs (four in total) resulted in the bodies that vertebrates have today.

All vertebrates today have the same body plan: two arms, two legs, a head with two eyes, two nostrils, a mouth with teeth, and so on.

However over the course of evolution, some animals didn’t quite follow this plan exactly. Their bodies needed to be different to suit their lifestyle – whether it was swimming or flying. This is how wings came about.

How animals started to fly 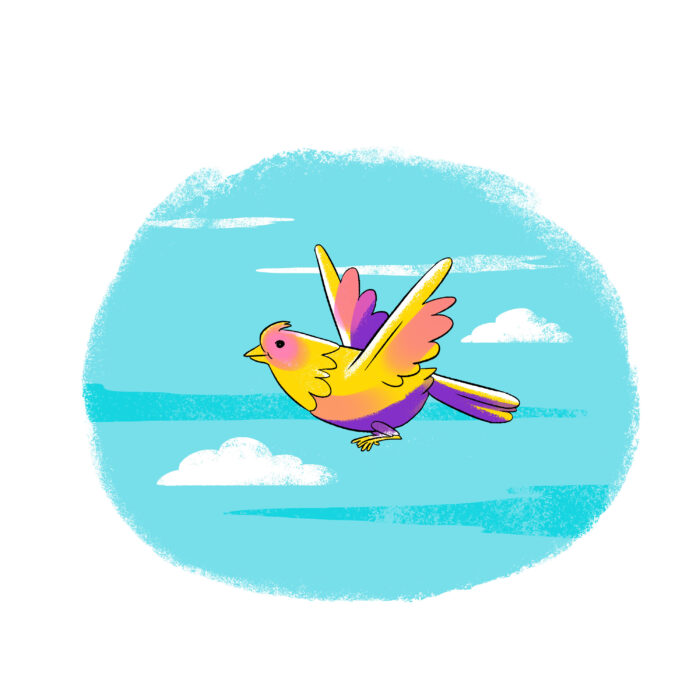 Wings of flying vertebrates, such as birds, are simply modified arms that help them fly.

You may have heard of pterosaurs – the (sometimes huge) flying creatures that lived during the time of the dinosaurs. Pterosaurs also slowly formed their wings over many, many years. They did this by growing one long finger that’s connected by a thin layer of skin called a membrane to the rest of their body.

One group of dinosaurs evolved into birds about 160 million years ago.

This happened well after dinosaurs first gained feathers to help keep their bodies cool or warm as needed. Then, from one parent to the next, they slowly gained longer front arms to eventually grow wings. 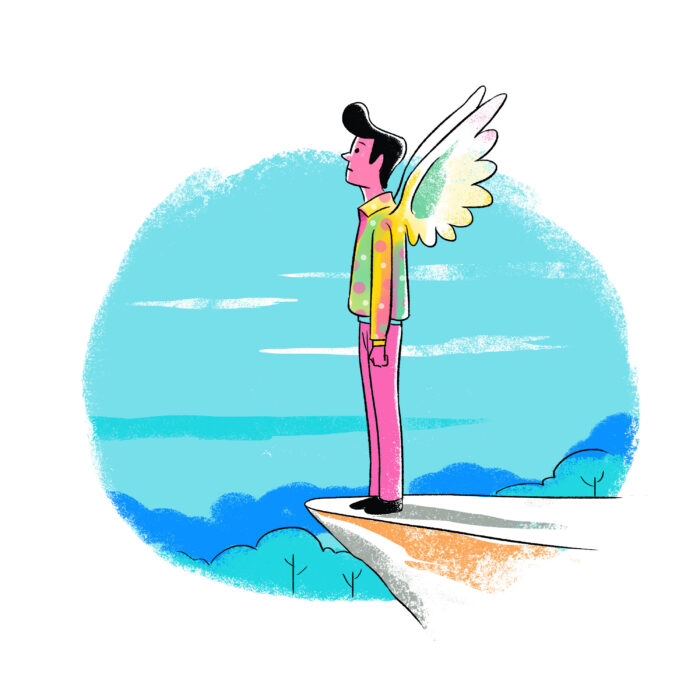 Birds inspired our first attempts to fly, but our progress was limited until we learned that we could not fly like them. Thanks to their lightweight body, great strength, and complex biological design, birds and other flying creatures can use their wings to create both lift and thrust, as well as to maintain control.

In order to fly:

But using only our muscles, we can’t get off the ground very high or very far for very long. So instead, we’ve created machines to do what we ourselves cannot. We separated the functions of lift and thrust, using wings to produce the former and engines to produce the latter.

Though we can never fly like birds, we can now fly with them.

What if we did have wings though?

Even if humans did have wings, we wouldn’t be able to fly immediately.

To fly, we would also need the right body size and metabolism. Metabolism is our body’s ability to use fuel (such as from the food we eat) to make energy, which helps us move.

Birds have higher metabolism than us. A hummingbird’s heart can beat up to 1,200 times per minute, while a human athlete’s heart might only go as fast as 220 beats per minute. This means hummingbirds can burn energy better than humans.

Flying birds also have much lighter bones that help them breathe better, feathers that help lift them while flying, and powerful lungs that keep oxygen pumping through their bodies.

Unless humans had all of this, we wouldn’t be able to fly even if we did have wings.

We’ll be back next month with another one of your ‘Tell Me Why…’ questions!,

Until then have a good time, and keep the curiosity alive!

To ask your own ‘Tell Me Why…’ question, fill the form below:

Yes, that’s true that we don’t have wings to fly but this is also true that we are gifted with a highly intelligent brain which helps us not just able to fly with the help of machines but also helps us to build ships, cars and even space vehicles through we can even fly to space which almost impossible for any other living organism to able to do it!

Thanks! For this article
I hope I also had wings, 🥺🥺🥺

Thanks a lot for such a lovely article…..

Tell me why octopus has 8 brains