It is common knowledge that most humans are obsessed with life-expectancy.  Therefore, in order to ensure that they live long enough, they consume nutritious food, like  multivitamins and green smoothies for instance, and obsess over their fitness regimen — all in an attempt to stretch their lifespan as much as possible.  But, records show that the oldest ever human being only lived for 122 years — a number that is considerably small when compared to the lifespan of other species and life-forms on Earth.

Remarkably, there are several species that exist on this planet that are  thousands of years old, thus comfortably beating Homo Sapiens in the life-expectancy race.  Let’s take a look at them:

Jonathan, The Oldest-Known Animal In The World 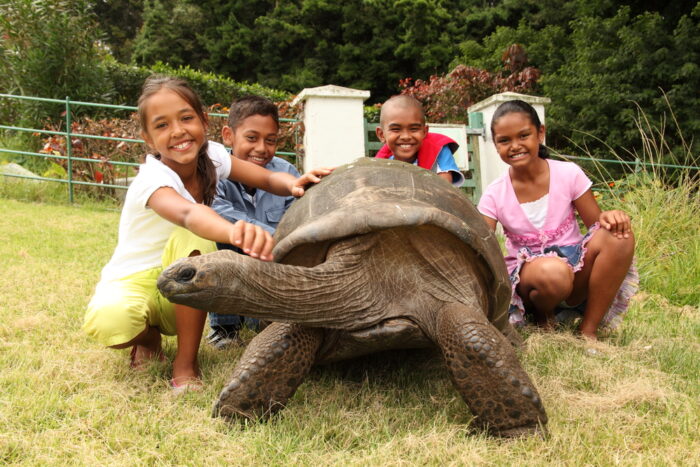 The year was 1832 — and Jonathan the tortoise was just a tiny hatchling.

The world was a very different place back then; the lightbulb was yet to be invented, and cars were still half a century away from revolutionising transport.

Jonathan, who is a Seychelles giant tortoise, lived to see it all. At around 189 years old, he’s now the oldest-known animal in the world — and he’s living a relaxed life on the remote island of St. Helena in the South Atlantic, where he’s been stationed since the late 1880s.

There are chances that Jonathan is fully blind, but he still makes his way around on his own very well. He typically spends his days lounging in the sun, munching on grass and chilling with his fellow tortoise friends. We think it’s a very calm life for someone with such a stature.  In fact, he’s so popular that his portrait is printed  on the back of the small island’s five pence coin. 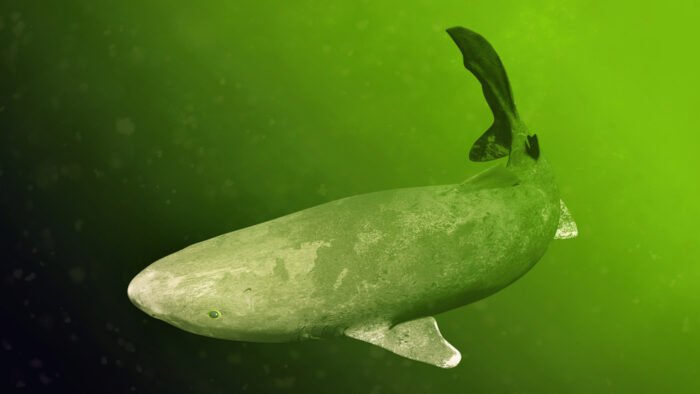 Often described as dinosaurs on Earth, Greenland sharks are an ancient shark species. They live in the cold Atlantic waters of Greenland, Iceland and the Arctic. These primaeval-looking animals usually live for over 200 years. In 2016, scientists said that a 16.5-foot female was estimated to be nearly 400 years old!

What’s the secret to Greenland sharks’ long lifespan? Researchers agree that it’s all down to the rate at which they grow. The average shark does not reach full maturity until they’re a century old! That’s like being born in 1921, and not being allowed to vote until this year! It also has a lot to do with the cold waters they’re native to, which slows metabolism and cell degeneration. 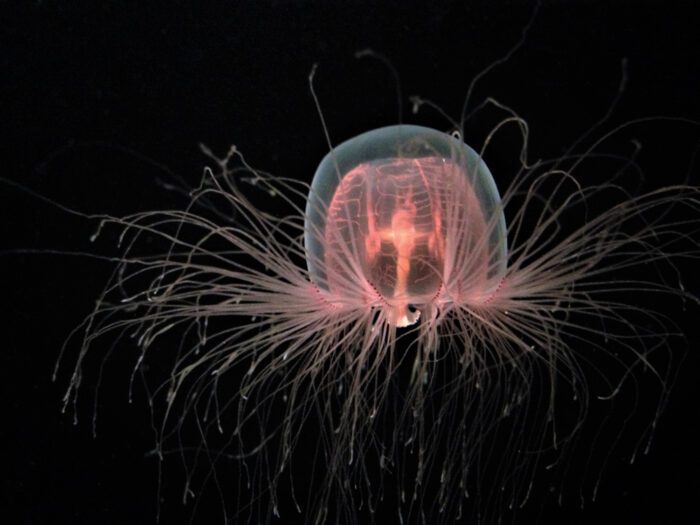 The term ‘immortal’ may get bandied around a lot in superhero movies. But until recently, the notion of eternal life was nothing more than fiction.In the 1980s, scientists made a startling discovery: the immortal jellyfish.

Even though there are some impressively old sea creatures, this one of the lot may have the ability to cheat death entirely. This heartless, brainless, transparent species is commonly found in the oceans.

The secret to this jelly’s “immortality” is its reproductive cycle. Starting out as an egg that transforms into a small “polyp” (an immature version of itself that clings to a rock as it grows),the jelly eventually grows big enough to become a free-floating jellyfish, with the signature tentacles and “bell” shape.

When stressed, this jellyfish can degrade its tentacles and bell, reverting to an earlier version of itself. These “mini-me” polyps are all genetically identical to the jellyfish that once was, just younger versions of itself, which eventually mature into fully fledged jellies once more.

Of course, this “immortality” doesn’t prevent the jellyfish from being eaten or succumbing to disease. But theoretically, it can revert back to an immature state and regrow over and over again. Imagine reaching old age, with creaky joints and wrinkled skin, only to transform back  into a toddler and grow up once more!

You may think we’re bending the definition of ‘creature’ a little with this entry, but deep-sea sponges are very much alive – and boy do they grow to be old. According to some studies, deep-sea sponges can live for  thousands of years. The oldest known example is estimated to have reached the grand age of 11,000!

Deep-sea sponges grow at tremendous depths, forming sprawling and often complex structures. Some of the largest known deep-sea sponges, which are about the size of a car, are thought to be the oldest of them. Their average lifespan is over 2,000 years – which means they’ve been around since the time of the Romans. 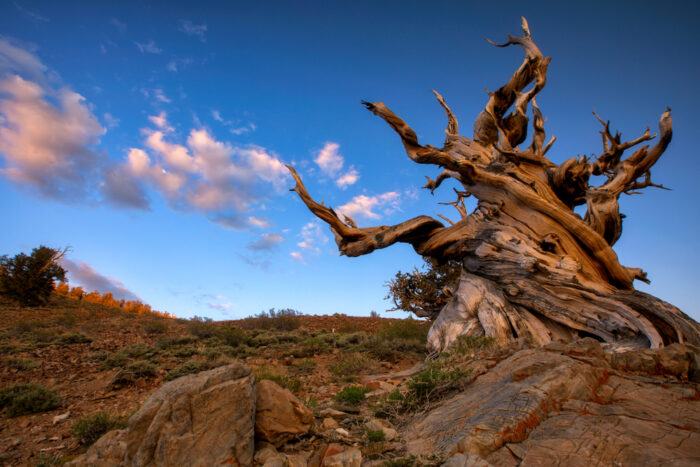 It’s no secret that trees have long lives. There are many famous examples, like the 300 year-old apple tree that is claimed to have inspired Isaac Newton’s theory of gravity. Even though 300 years might sound impressive for a tree… it isn’t.

In the arid White Mountains of California, these ancient sentinels have stood for millennia. The bristlecone pine, twisted and wizened trees with gnarled roots appear more dead than alive.

Some of these trees have been given ancient nicknames like “Methuselah” or “Prometheus”, which refer to their age — over 4,000 years! But there is one unnamed tree older than all of them. It is  5,062 years old and is still going strong!

When it first sprouted, the pyramids hadn’t been built and the construction of Stonehenge had just begun.  It kept its roots firmly planted even when we entered the Bronze Age, and  the Egyptian and Roman Empires rose and fell.

But it might be a task to locate this particular tree. Scientists keep its precise location a secret to ensure that it’s not damaged by sightseers. 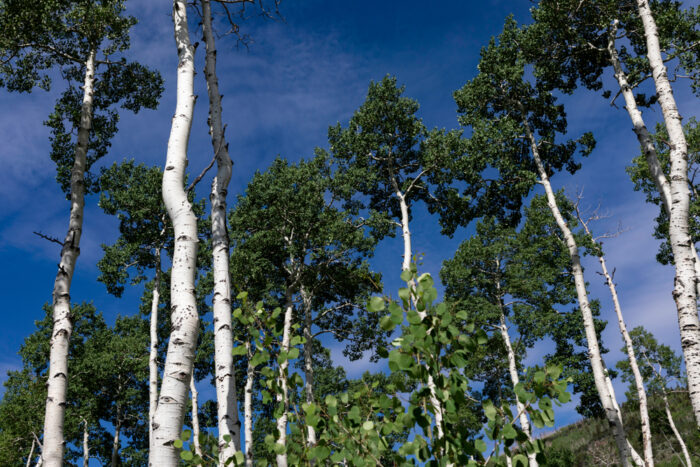 The quaking aspen is quite a common tree in North America. But in Utah, there lives a very special one. “Pando”, as it’s called, could be hard to define as a “tree”. It is a collection of 47,000 trees, all clones, and stemming from a single extensive root system that once began with a single seed.

This grove of trees spans 107 acres and has been estimated to be 80,000 years old! It’s hard to pinpoint its exact age because the original tree is long gone.

Today, its clone descendants carry on the legacy, making this a truly special, and extremely old, organism. Sadly, the ancient super-organism is dying because of global warming.

Do you know of any creature or organism that would fit this list of oldest living things? Tell us in the comment section below

Wow! Beyond our imagination.
Hope in future, through scientific developments humans could also achieve such superpower like things; prevent from becoming old and to become immortal!

If we somehow plant the stem cells of that immortal jellyfish turrhitopsis dohrnii into our body, then maybe we could also become immortal!
Or atleast slow down our age😃