The third question of the ‘What If?’ series comes to us from 11-year-old Khushi Verma of Patna. She asks:

What if all the insects on Earth vanished?

There are a lot of insects on Earth. Seriously, a LOT!

In fact, there are so many insects that, according to the Smithsonian Museum, insects have the largest biomass of all terrestrial animals.  Half of all the known species living on the planet are insects. At any time, it is estimated that there are some 10 quintillion (that’s 10 followed by 18 zeroes!) individual insects alive. That’s more than the total number of stars in the whole Milky Way galaxy.

In spite of seriously outnumbering us, we often think of insects as troublesome creatures that get in our way. Sure, the beautiful ones like butterflies and the obviously useful ones like earthworms get a clean pass, but most insects don’t have a good reputation with us humans. We even have a bunch of descriptive names to express our distaste for insects like ‘creepy crawlies’ and ‘pests’.

Even the seemingly harmless word ‘bug’ has such negative connotations. If someone’s being annoying, you say, “don’t bug me!” When a software developer encounters a problem in the code, it has to be “de-bugged”.

For a lot of us, a world without insects might sound like a pretty good idea. No more moths that eat away at your socks. No fear of ants sneaking up on food left out in the open. No more getting stung by wasps and hornets. No risk of dangerous diseases like malaria and dengue that are transmitted by insects. Farmers won’t find the need to use harmful pesticides and insecticides. Sure, we might have to give up honey forever, but if it means never getting bitten by a mosquito ever again, one might seriously consider the option, even if they really love honey!

But the fact remains that insects, no matter how pesky, annoying, gross or pretty, all play a monumentally important role in maintaining that fine balance in nature that keeps everything ticking in perfect order.

If insects were to “vanish” all at once as Khushi asks, the Earth would get suddenly lighter. 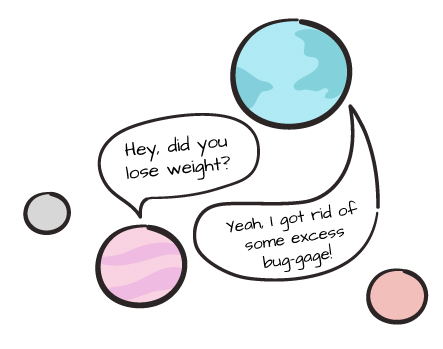 But pretty much immediately after the insects vanish, the effects would be disastrous and could cause the end of almost all life on the planet. How would this happen? You’ve probably read about the food chain at school. It’s a diagram that shows how the life cycle of the natural world and looks something like this… In the natural world, many food chains link up to form a massive food web – a complicated system of prey and predator and many levels branching out into many more. Disturbing even a single link in the food web can have disastrous consequences and knock off nature’s balance.

If all the insects vanished, the ripples would be felt all across this intricate food web. No insects means that countless species of small birds, frogs and other reptiles and amphibians that survive almost entirely on an insect diet would have nothing to eat. When these animals starve to death, it would reduce the food source for other animals farther up the chain, all the way to humans, a lot of whom rely on meat as a source of nutrition. 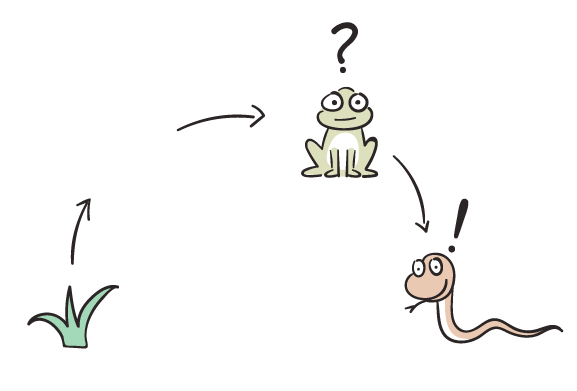 So would this mean that an insect-free world is a world full of vegetarians? Not quite. Without insects like bees and butterflies, most flowering and fruit-bearing plants would not be able to pollinate. These little critters methodically fly from flower to flower, spreading pollen as far as possible. While plants also rely on wind and animals for pollination, there are thousands of species that rely solely on these insects.  Humans have also devised some ways to artificially pollinate certain crops,  it doesn’t even come close to the scale at which these insects contribute to the process.

Apart from these pollinating insects, there are a variety of bugs that help plant life by eating almost anything around them. These bugs feed on weeds and other smaller parasitic insects and prevent them from taking over other plants. Insects are also great at recycling and play an important role in the breaking down of excreta, dead and decaying matter.  One of the greatest at recycling is the dung beetle. With the ability to transport chunks of dung that are 250 times its own body weight, these little poo-loving creatures feed on the dung of cattle and other herbivores. That’s like a human carrying roughly 18 tonnes with bare hands!

The importance of even a single species going missing from the eco-system has been well documented in history. Way back in the 18th century, the British brought cows to Australia. Now as we all know, cows poop a lot! Back in England though, the native dung beetle species would take care of a lot of that poop and recycle it back into the soil as fertiliser.

Unfortunately, the local Australian dung beetles were only used to dry, fibrous dung of marsupials like kangaroos and had no interest in all the new cow dung. So the dung kept piling on. By 1960, the cows had covered over 5,00,000 acres of grassland in cow dung. That’s roughly 10,000 cricket stadiums full of dung!

Now while some amount of cow dung is a good fertiliser for the soil, an excess can cause toxicity in the soil and prevent plants from growing there permanently. If the absence of just one species of dung beetle could cause such a massive poo problem, imagine what would happen if all the 5,000+ species of dung beetles vanished! The world would be a much smellier place! One of the best warnings about what would happen to humanity without insects comes from a man who is credited with saving millions of lives – Jonas Salk, the scientist who discovered the vaccine for the Polio virus. He said, “If all the insects were to disappear from the Earth, within fifty years all life on Earth would end. If all human beings disappeared from the Earth, within fifty years all forms of life would flourish.”

What if sun orbited the Earth

what is inside blackhole

This series is very interesting and most educative as to find the answer of ‘what if?’ We should have the knowledge of that. And we get it from the answer.👍

Why no other what if make some more

Why no more what if

What if there are two moon around Earth in the universe?

What if the Earth wasn’t round?

Very informative and very much Intresting..it makes me think more and more curiously

Can i submit more than one what if question ?
Actually i have already submitted many.
If you ( team byju’s ) found them interesting and know the answers then please feature them.

What if there was a food replacement pill?

What if there is another planet like Earth where living things can survive? Will humans who born on Earth will choose that planet for them to survive or they will be staying on the Earth itself ?

What if plants could walk?

It’s very interesting and in detail too….

Can we ask questions here?? If yes then I have a bunch of questions related to the Mudhdhoo Island even called Vaadhoo Island. In these islands we have a special kind of plankton called dinoflagellates which glow ,when inside of the cell gets disturbed. In that disturbance inside the cell there will be a reaction which makes the plankton glow. Could the Byju’s help me in this studying by answering how the reaction works, and could you guys explain some complex things like PPi in the reaction. 1. Explaining the reaction? 2. Properties and explanation of the components present in that reaction. Please explain struggling for 2 days of reseach. Please don’t copy from the google and paste here. If that is the case then I already got incomplete the answer.

What if sun become half its size?

> The Origin Story of the word 'OK'

> Tell Me Why #4: Why do human beings speak so many languages?

> A Shocking Connection Between Pyjamas and World War I

> The Origin Story of the word 'OK'

> Tell Me Why #4: Why do human beings speak so many languages?

> A Shocking Connection Between Pyjamas and World War I