Why Do Cats Purr? It’s Not Just Because They’re Happy 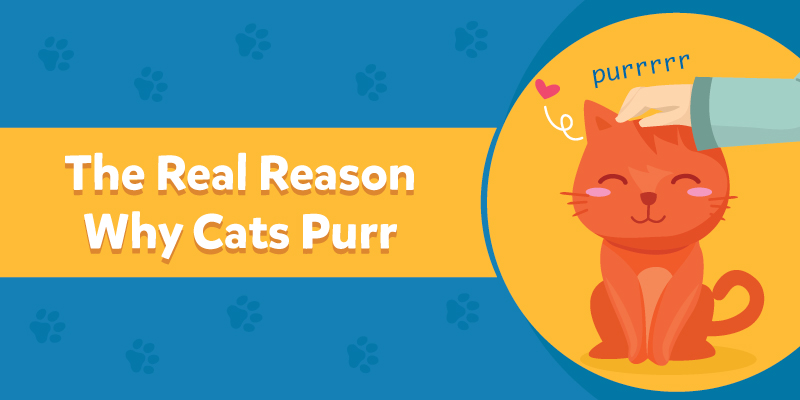 Cats: you’ve probably got some questions about them. Questions like “why do they purr?”, “why has mine knocked over all the plants again?” and “seriously, why would they knock them down!”

Although the latter behaviour is doubtlessly down to your favourite ball of fur being a criminal mastermind, the reason behind cats purring isn’t as clear. While many cat owners presume their pet purrs purely to display pleasure, research suggests those soothing vibrations are made for several reasons.

From the worrying, to undeniably cute, here is the strange science of why cats purr.

How do cats purr?

It should be an easy question to answer. But cats being cats have made things difficult here, their complex biology leading to a fierce debate among scientists. For instance, it was previously thought that purring was caused by blood surging through the inferior vena cava – a vein that carries deoxygenated blood to the right side of the heart.

However, this theory has been swept into the litter tray, with research now suggesting the noise comes from the muscles within the cat’s larynx ( LAYR-inx). It is the area of the throat containing the vocal cords and is used for breathing, swallowing, and talking –  also called voice box.

As they move, cats dilate and constrict the glottis – the part of the larynx that surrounds the vocal cords – and the air vibrates every time the cat breathes in or out. The result? A purr.

What does it mean when a cat is purring?

No one is certain exactly why cats purr, though there are a number of good guesses.

The obvious observation is cats seem to purr when they’re pleased and feeling good. From an early age many of us are taught that when cats purr, they’re telling you they’re happy. While purring is thought to be partly voluntary and partly instinctive, research suggests that cats can purr for various reasons.

Kittens are born blind and deaf, remaining so until they are around two weeks old. However, they begin purring after just a few days, primarily to let their mothers know where they are, and to attract their attention at feeding time. This behaviour continues into adulthood and will be familiar to cat owners who are treated to a coercive display of purring at dinner time. But this is just one of several different ways in which the purr is used.

There is More to Purring Than a Happy Cat

Cats often purr when humans stroke them, leading to an association between purring and pleasure. Observed feline behaviour suggests they may also be trying to encourage further interaction, as if to say “please continue to stroke me”.

A 2009 study found that cats can conceal a cry within their purr that triggers a nurturing instinct in their owners, similar to the cries of a human baby. The study observed that when purring to solicit food, the noise cats made was “more urgent and less pleasant”, suggesting they can manipulate their purrs to communicate different things.

Experts have also theorised that your cat may actually be purring when they’re injured or in distress – the complete opposite of happy.

But why do they purr after a stressful event? A 2001 study published in The Journal of the Acoustical Society of America showed that domestic cats and some species of big cats, including pumas and cheetahs, could purr in an attempt to self soothe, potentially helping them to feel calmer or to relieve pain.

Indeed, cats are observed purring in situations where they are likely to be experiencing stress or physical discomfort. For instance, cats may purr after they’ve been startled, or after stressful episodes like being chased by a dog.

So, while the purr does generally represent contentment for cats, it can also express nervousness, fear and stress. Fortunately, more often than not, it’s an indicator of a happy cat.

The Shocking Reason Behind Purring

Most surprisingly, the same research also showed that there may be a deeper reason behind purring. Purring may actually be helping these cats in self-repair and bone growth!

The hypothesis is that the purr is a powerful healing action. It’s thought that the vibrations from the activity are physically rejuvenating – a way for the cat to ‘heal’ itself after stress. The frequency of purr vibrations – which range from 20Hz up to 150Hz – is thought to promote bone growth, as bones harden in response to the pressure. Other frequencies may do something similar to tissue.

Purrs at a frequency of 25-100Hz correspond with established healing frequencies in therapeutic medicine for humans. Bones respond to 25-50Hz and skin and soft tissues to around 100Hz according to researchers.

This is perhaps why we see cats purring in apparent contentment while asleep. In reality, it’s a form of self-repair. Cats may have adapted their normal behaviour – which involves spending a lot of the day resting – as a way of avoiding injury through over-exertion. The purr has developed as a low-energy way to keep bones and tissues in good condition while they rest.

So how can you tell why your cat is purring? Your best chance of understanding them is to look at their body language and the context. If they’re purring first thing in the morning, they may be asking to be fed. If you’ve just returned from school, they might be saying hello and if they are sitting in your lap, purring contentedly, they might just be signalling their approval.

What are some other strange behaviours you’ve observed in animals? Tell us in the comments below.