Why do Worker Ants Carry the Grubs About? And Other Fun Facts About Ants!

All of us tend to look up to big people for lessons on how to get better. We are keen to learn the secrets of their success. But we forget that sometimes the biggest lessons in life come from the smallest folks around us. Now that’s a good lesson to remember!

Take ants, for instance. Would you believe those small creatures could teach us how to live a better life?

There seems nothing extraordinary about them! You see them in and around your house daily. “What can an ant teach me?”, one may wonder.

Well, you’d be surprised to know how much these little ants can teach us, if only we observe them a little closely.

But before we learn any lessons, let’s read some fun facts about ants!

Some Amazing Facts about Ants

Most ants you see are female The queen is the founder of the colony, and her role is to lay eggs. Worker ants are all female, and this sisterhood is responsible for the harmonious operation of the colony.

Their tasks range from caring for the queen and the young, foraging, policing conflicts in the colony, and waste disposal. Workers will most likely never have their own offspring. The vast majority of eggs develop as workers, but once the colony is ready the queen produces the next generation of reproductives which will go on to start their own colonies.

A female ant’s fate to become a worker or queen is mainly determined by diet, not genetics. Any female ant larva can become the queen – those that do receive diets richer in protein. The other larvae receive less protein, which causes them to develop as workers.

All ants care for grubs 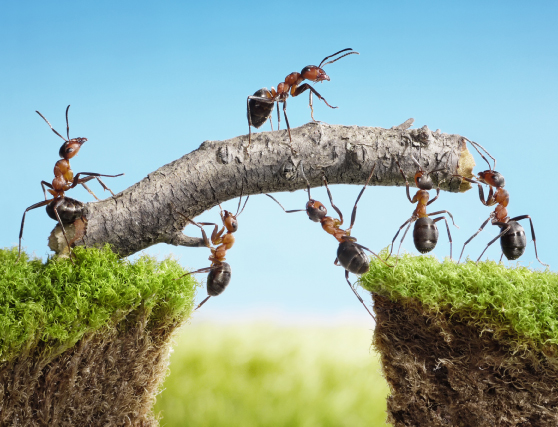 We have seen ants since we were children, but haven’t always paid enough attention to them. Where do they live? In their comfortable homes called ‘nests’ or ‘anthills’. Each has hundreds of little rooms and passages. In some of these rooms the queen ant lays eggs. The larva of ants is called a grub. All worker ants have different roles and duties towards these grubs.

Worker ants even carry these larva around. Why do the worker ants carry the grubs about? Well, we told you all ants have a role to play in their society.  Soldier ants guard the grubs. Workers feed and clean them, and also carry them about daily for airing, exercise and sunshine. Two or three weeks later, grubs become cocoons and lie without food or activity for three weeks more. Then the cocoons break and perfect ants appear. Now it’s time for teaching and training. New ants learn their duties from old ants as workers, soldiers, builders, cleaners, etc. After a few weeks’ training, the small ants are ready to go out into the big world of work! 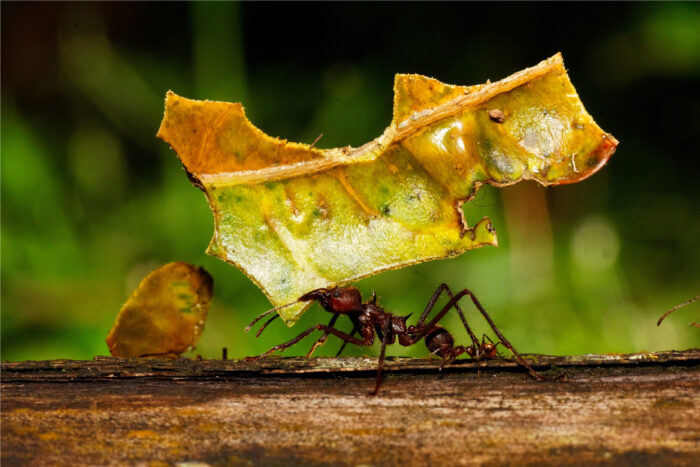 Yes, you did read that correctly! Ants are ridiculously strong. They have the ability to carry between 10 and 50 times their own body weight! The amount an ant can carry depends on the species. The Asian weaver ant, for example, can lift 100 times its own body weight.

Why are ants strong?

This amazing strength is a result of their small size, believe it or not. The Arizona State University reports that because of their small size, ants’ muscles have a greater cross-sectional area relative to their body size compared to larger animals. This means they can produce more force. Due to their small size, ants don’t have the room to accommodate a complex respiratory system such as ours. Instead, they have their own ways of respiration to help transport oxygen around their bodies.

How do ants breathe?

Ants breathe in oxygen through spiracles which are a series of holes located on the sides of their bodies. The spiracles are connected through a network of tubes that help distribute the oxygen to almost every cell in their body.

An ant’s movement helps the oxygen to circulate through the tubes, with the released carbon dioxide exiting through these tubes as well. 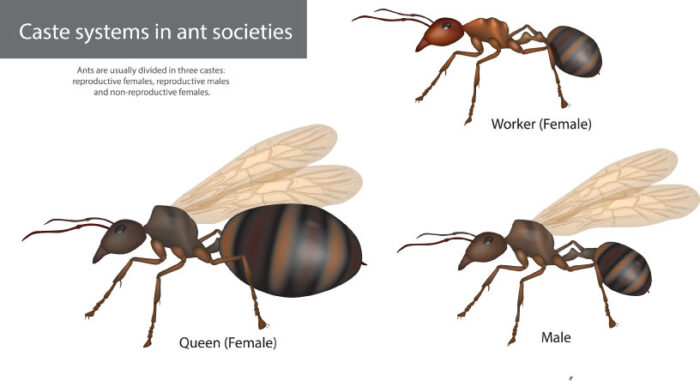 This may sound strange but hear us out! Some species of ant, such as the Polyergus lucidus are known as slave-making ants. They invade neighboring ant colonies, capturing its inhabitants and forcing them to work for them. This process is known as ‘slave raiding’.

Slave-making ants are specialized to parasite a single species or a group of related species which are often close relatives to them. The captured ants will work as if they were in their own colony, while the slave-making workers will only concentrate on replenishing their labor force. Lifespan of ants depends upon a number of factors such as:

Generally, ants have a short life cycle, but some colony members can live from as little as a few days to as long as a few decades. Probably one of the most important factors affecting the lifespan is the respective ant’s role; the queens, males, and workers that occupy the ant colony.

Male Ants – Male adults live for only a few days and die after mating with the females.

Queen Ants – Ant queens, the egg-laying members of the colony, are the most long-lived colony members and may live for multiple years.

Worker Ants – Workers, the non-reproducing female adult stage that does most of the work needed to properly support and maintain the colony, live for a few weeks to several months. 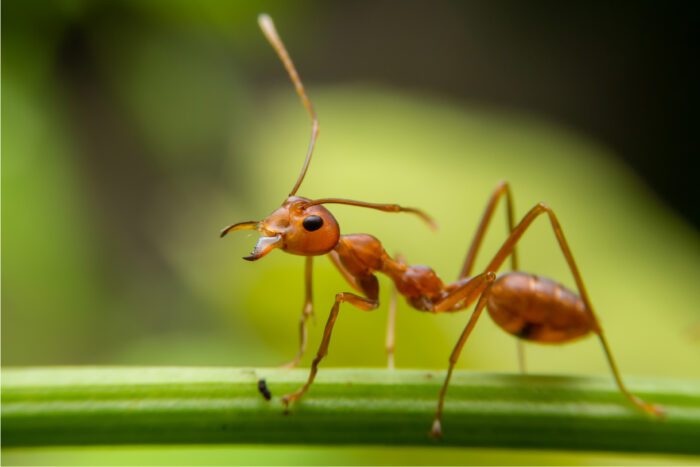 This is perhaps the strangest ant fact! There is a species of fungus that infects ants and takes control of their bodies. The fungus finds its way underneath the ant’s exoskeleton and begins to consume soft tissue. Shortly after, through an unknown mechanisms, it causes the ant to leave its colony. The ant then finds a leaf, bites it with a “death grip,” and dies. A few days later, the fungus releases spores to infect more ants. Some ant species have learned to recognize infected colony mates and will carry them far away to protect the rest of the colony.

What Can Ants Teach Us?

The ant is an industrious creature. Small in size, but wise in its ability to optimise its time, skills and resources. Here are some important lessons ants can teach us:

Ants are diligent and hardworking

Ants teach us the value of hard work. Laziness does not feature in an ant’s dictionary!! Their efforts and hard work sustains them! From ants, we can learn the lesson that if we strive to be diligent and work hard, the results will follow.

Ants have a ‘can do attitude’ 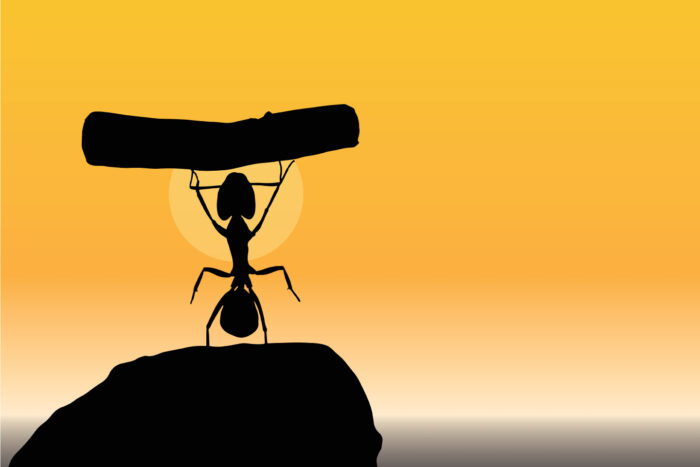 Ants exemplify what it means to be self-motivated. Size and location are not limiting factors for them. They make no excuses and continue with the business of getting things done. No one has to whip them to move, do their work or to work together. They work for the common good. Moreover, they do not need a captain or a leader as they are disciplined and natural self-starters. Have you noticed how ants always look for a way around an obstacle?

Put your finger in an ant’s path and it will try to go around it, or over it. It will keep looking for a way out. It won’t just stand there and stare. It won’t give up and go back.

We should all learn to be like that. There will always be obstacles in our lives. The challenge is to keep trying, keep looking for alternative routes to get to our goals.

Winston Churchill probably best paraphrased the ant’s mindset when he offered this priceless advice: “Never give up. Never, never give up!”

Ants work as a team 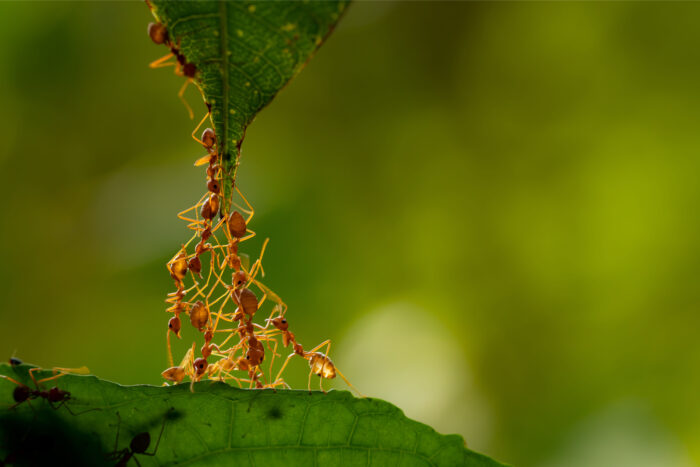 When it comes to ants, every team member has a responsibility. Ants create small teams with tasks assigned. Some are assigned to building colonies, some to collect food, and some to inform the team working about external threats.

Humans can learn team building activities from ants! If you want to go far, you need a team to do so. Not everything can be achieved alone. Take an example of any business – it is always the team and not individuals which plays a vital role in growth of the business.

Now ants can seem like one of the most insignificant insects on the planet because of their size. But the colonies they build and the contribution to their society is extremely significant and great.

What big dreams do you have for your future? Pursue them. No matter how small you think you are, you should always pursue something bigger than yourself.

We hope that you learned many new things about the unseen world of ants today. So the next time when you see an ant, remember how fascinating she really is!

And before we go, we have a question for you. How do you think ants help humans and the environment? Tell us in the comment section below.