Thomas Edison and his great inventions

Can you ever imagine the world without light or electricity? The first thing which must be running in your mind is, “Oh God! What will I do without WiFi or how will I charge my smartphone?”. But my friend, think about the absence of light rather than electricity. Can you survive in darkness? If yes, then for how long? Think about the time when there was no light. People used to light up lamps to do their work. There was no light in the whole world.

Then in 1879, Thomas Edison made a breakthrough and invented the bulb that used a platinum filament. With this, the world explored to a new way of watching things around them. Thomas Edison, one of the most famous and innovative inventors of all time. He exerted an influence on modern life. He contributed inventions such as the phonograph, incandescent light bulb, motion picture and improved the telegraph and telephone.

He lived between 1847-1931, an inventor and businessman who born in Ohio and holds the patents on more than 1000 products. It’s difficult to pick just one of his inventions as the most important one. But you can say that the incandescent light bulb is the most important invention. He is not only renowned for smart inventions but for his dynamic nature also which puts him at the top of the list. 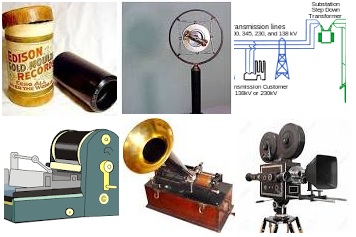 1878-  He became the first person who applied the term filament to a wire that glows when carried an Electric Current.

1879 – He invented the first commercial incandescent electric lamp. The lamp was enhanced and perfected on 21st October 1879. Also, constructed the first electric motor made for a 110 to 120-volt line.

1880- He hits on carbonized bamboo as a viable alternative for the filament, which proved to be a long lasting and most affordable bulb.

1891- He invented the first motion picture camera. With its continuous tape-like film, this mechanism made it possible to take and project motion pictures which we see and hear them today.

1900 – 1910- He invented and perfected the steel alkaline storage battery and made it a grand commercial success.

1914 – He invented the Telescribe, a combination of the telephone and the dictating phonograph and for the first time recording of both the sides of a phone conversation was done.

Edison holds 15 awards among all his successes. His laboratory which was his home in actual turned into a historical destination. His contributions revolutionized various industries and made it possible for the modern world in which we are living today.