Milestones in Human Creativity: How The Camera Was Invented

We all love taking a good selfie..but can you imagine a world where cameras and photographs simply did not exist? The world would have been a far duller place without photographs to take us back to our favourite moments. So let’s dive into the story of the camera, one of humanity’s most ingenious creations!

How It All Began 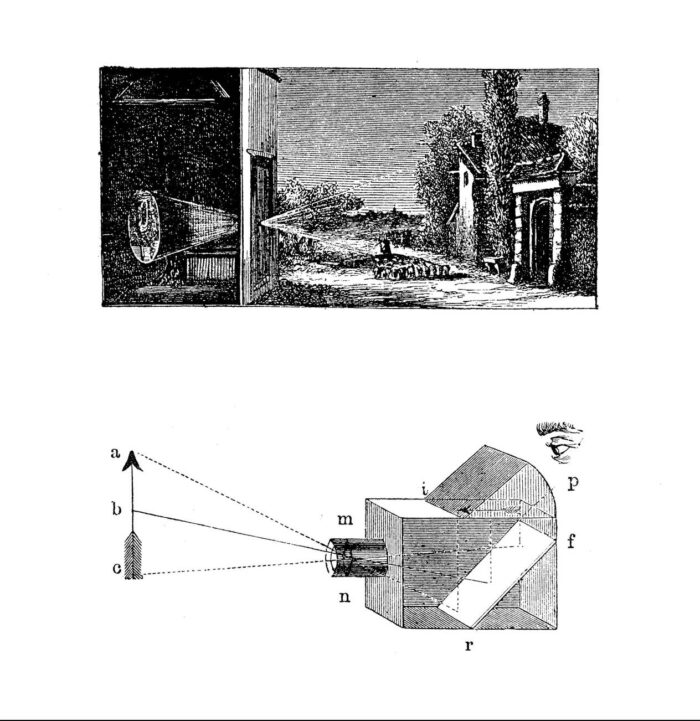 The very first camera known to have existed is the Camera Obscura. Although it served as a precursor for all modern photography, the Camera Obscura never took any photos! Rather it focused light through a lens, which is a small hole, and then projected it onto a screen. A similar mechanism can be found in pinhole cameras!

Mo-Ti, a Chinese philosopher who lived from 470 BC to 390 BC, was the first person in history to have conceptualised a camera, calling it the ‘locked treasure room’, an idea very similar to the pinhole camera. Aristotle loved this idea so much that he was inspired to use the design to observe eclipses without needing to look at the sun directly. 1300 years later, the Arab mathematician, philosopher, and physicist Abu Ali Al-Hasan Ibn al-Haitham (965–1039 AD), who is considered the father of modern optics, revived the concept of the pinhole camera. He documented the design and characteristics in his published writing called the Book of Optics.

From there, the ancient evolution of the camera slowed down, until Joseph Nicèphore Nièpce took the world’s first photograph in 1826. But before Nicèphore figured it out, there were a few more people who had a role to play in the invention of the modern camera. A modern take on a Pinhole Camera

In the early 1600s, Johannes Kepler added a lens to reduce the device’s size, while Robert Boyle and his assistant Robert Hooke refined it further to make the camera portable in the mid-1650s. In 1685, German author Johann Zahn also tried his hand at the camera, designing a model for what can be called a handheld reflex camera.

It was in 1816 that the first physical model of a working camera came into existence, with Joseph Nicèphore, who realised that light from a pinhole camera can be projected onto an external surface, and an imprint could be retained.

He then discovered that if the light was projected onto an element that blocked shadow and light areas on a metal plate coated in bitumen, it created a pattern on the coated plate similar to the shape of the element. ‘View from the Window at Les Gras.’

And thus in that tiny moment in 1826, in a quaint estate in Eastern France a Frenchman ended up taking the world’s very first photograph ever! Nicèphpore titled the image, ‘View from the Window at Les Gras.’

Despite the massive step ahead, Nicèphore still had a few hiccups. His imprint only stayed for a few hours and it took eight hours of exposure to make it happen. Unfortunately the resulting image was quite blurry and could not be recognized as a real photograph, appearing almost like an abstract painting, save for the date written on it.

Predecessor to The Modern Camera: The Daguerreotype (1840s to 1850s) 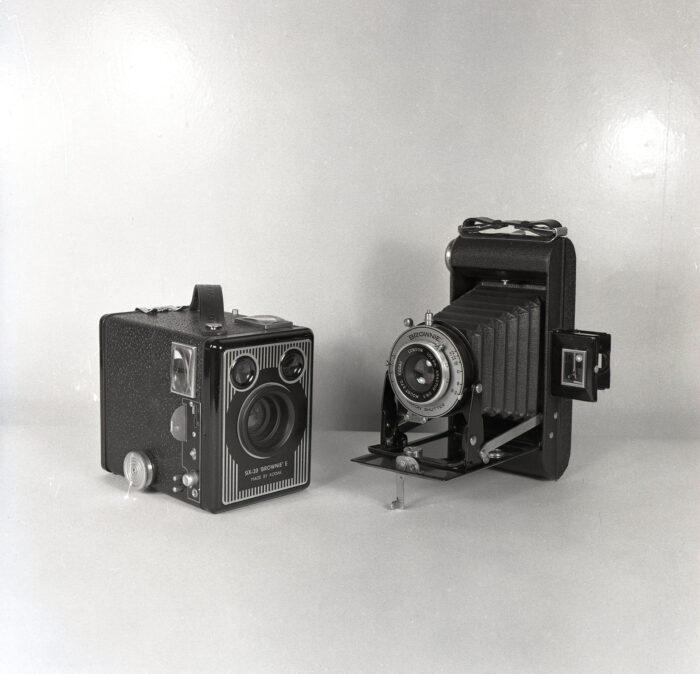 This is where Louis Daguerre and his daguerreotype came in! Daguerre joined Nicèphore in his passion, shortening the time of exposure and figuring out how to retain the imprint for a longer time. Finally, in 1839 the daguerreotype, using an iodine-coated silver-plated copper for the impression and a silver-chloride bath to fix the photo, was created and licensed to the French government, opening the doors to all forms of modern photography that we know today! Henry Fox Talbot’s calotype, a daguerreotype variant, also enjoyed popularity during this era. 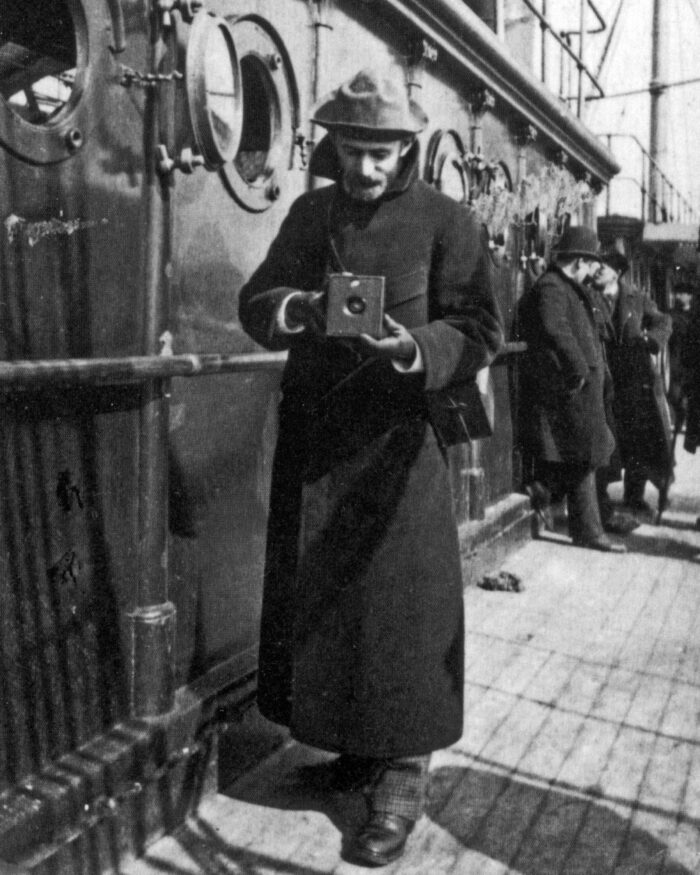 George Eastman, founder of the Eastman Kodak Company, with a Kodak Camera in 1890.

In 1871, Richard Leach Maddox invented a gelatin dry plate that produced instantaneous exposures, bringing us so much closer to the modern photograph. Next came analog photography (remember Kodak?), but it reached its peak only when American George Eastman pioneered the use of roll film cameras. A single Kodak camera that came with 100 exposures that had to be sent back to the Eastman Kodak factory in Rochester, New York, to be developed. 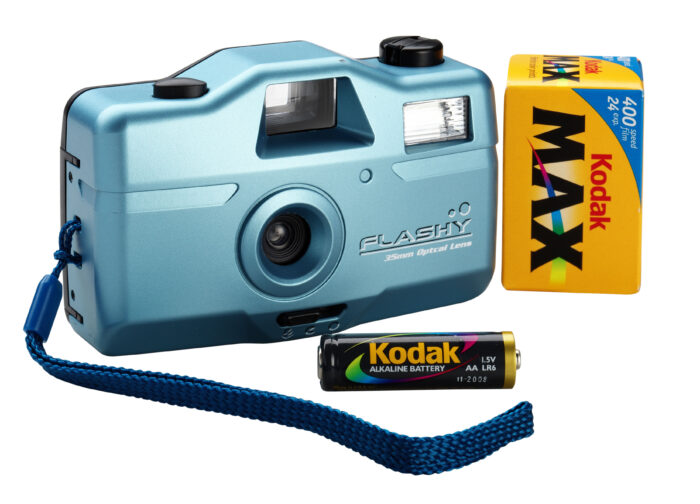 Finally between 1905 and 1913, camera companies introduced standalone rolls of 35mm film that could be inserted into and removed by the user in their own camera. Although Oskar Barnack, a German inventor and photographer, is generally credited for the 35mm film cameras, it was again Kodak that made these popular, quickly becoming the leading provider of photographic film for the world’s 35mm cameras, until digital cameras took over in the late 1900s.

The Age of Digital Photography (1970s to now)

NASA scientist Eugene F. Lally came up with a theory for digital cameras in 1961. He wanted to figure out how astronauts could understand their position in space by using a photo sensor that could take pictures of the planets and stars. Unfortunately, his idea was way ahead of the existing technology in photography at that time.

It was Eastman Kodak engineer Steven Sasson who invented the first-ever digital camera. He developed a prototype in 1975 from a movie camera lens, spare Motorola parts, 16 batteries and newly invented electronic sensors. The device was 4KG in weight and was as big as a printer, and wasn’t really a product for the masses. 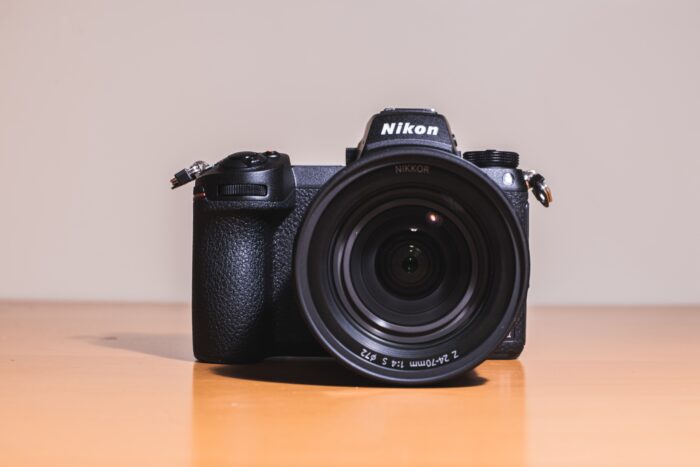 The invention of the charged-couple device (CCD) in 1969 is what really changed the landscape of photography from film to digital. A CCD is the light sensor that sits behind the lens of the camera and captures the image, taking the place of the film in the camera. The first cameras with CCD sensors were specialist industry models by Fairchild, who launched the first commercial CCD in 1973. By the 1980s, most handheld cameras began to ditch film in the west.

As we continue to go further and beyond anything we’ve ever done before when it comes to technology, the iconic photograph from Les Gras still remains on display at the University of Texas in Austin, serving as a reminder of the ingenious spirit of humankind! If we could find the perfect soundtrack to this story, it would be ‘Don’t Stop Believing.’

If you liked reading this article, check out some other interesting origin stories below!

Flying High: The Origin Of Air TravelSailing through history: A lookback at the origin of ships 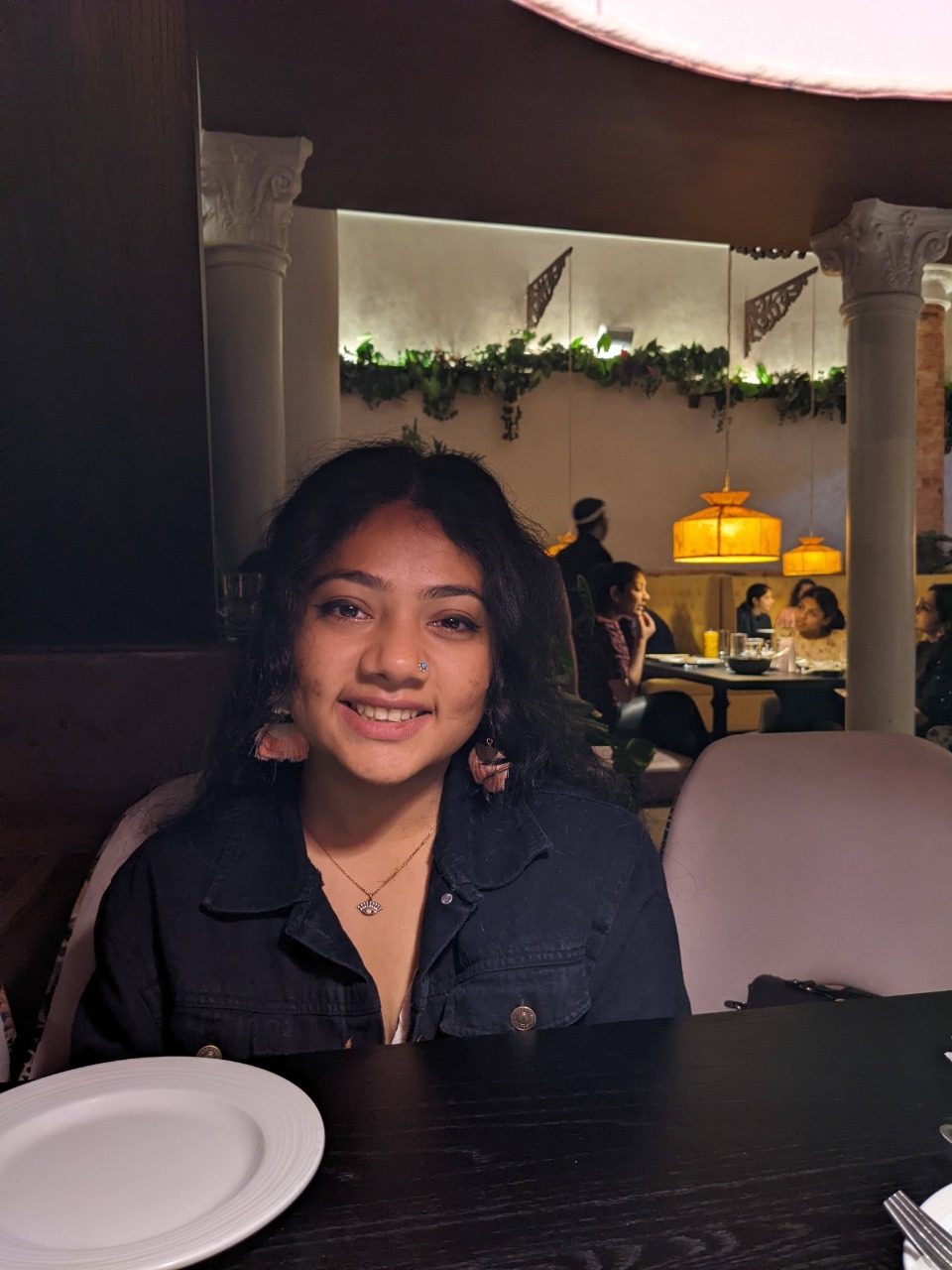 Adrija is a writer, dancer, and artist, who loves to learn (about everything). She has grown up in many places and still carries a big love for all things travel and culture. Adrija loves fantasy, science-fiction and anything that transports her to magical worlds. Her favourite books include Harry Potter and The Hitchhiker’s Guide to the Galaxy. She’s always on the lookout for cute animals to pet, places to explore, and good humans to share stories, laughter, and joy with.