Did you know the names of the months are older than the calendar?

There are only 12 months in a year, with the start of every brand new year filled with resolutions, goals and promises. From forming good habits to learning new and exciting things, everyone is busy trying to make positive changes.

But….what do you think is the first thing we all change without fail at the start of a new year, with or without a resolution? It’s the calendar itself!

However, do you know that the names of the months are much older than the modern day calendar?! Have you ever wondered where the unique names of all months come from?

Some of the names sound like they might be English words but most of them sound exotic, don’t they? Well, wonder no more! In today’s story, we take you time-hopping through the calendar to explore the fascinating stories behind the names of each month in the year (Psst! As with a lot of things, the people responsible for this are the ancient Romans!)

The Gregorian Calendar – The calendar followed throughout the world:

The Gregorian calendar has a history older than itself. You’ll read more on that later in this post. The calendar that we follow internationally and the one that you see on your desktops and cell phones are all Gregorian calendars. This calendar had replaced the old Julian calendar in 1582 and over centuries it was used across cultures and countries all across the world. There are two main types of calendars, one is lunar based while the other is solar based. The Greek calendar was a solar based calendar.

Facts about the Gregorian calendar or the modern calendar:

Names of months in English and in Roman:

Easy way to remember the days in a month: (Knuckle mnemonic)

Some of you may already know this little trick. It is a very effective way to find out the number of months in a year. It is sometimes called the Knuckle mnemonic as we use the. There are two methods in Knuckle mnemonics. 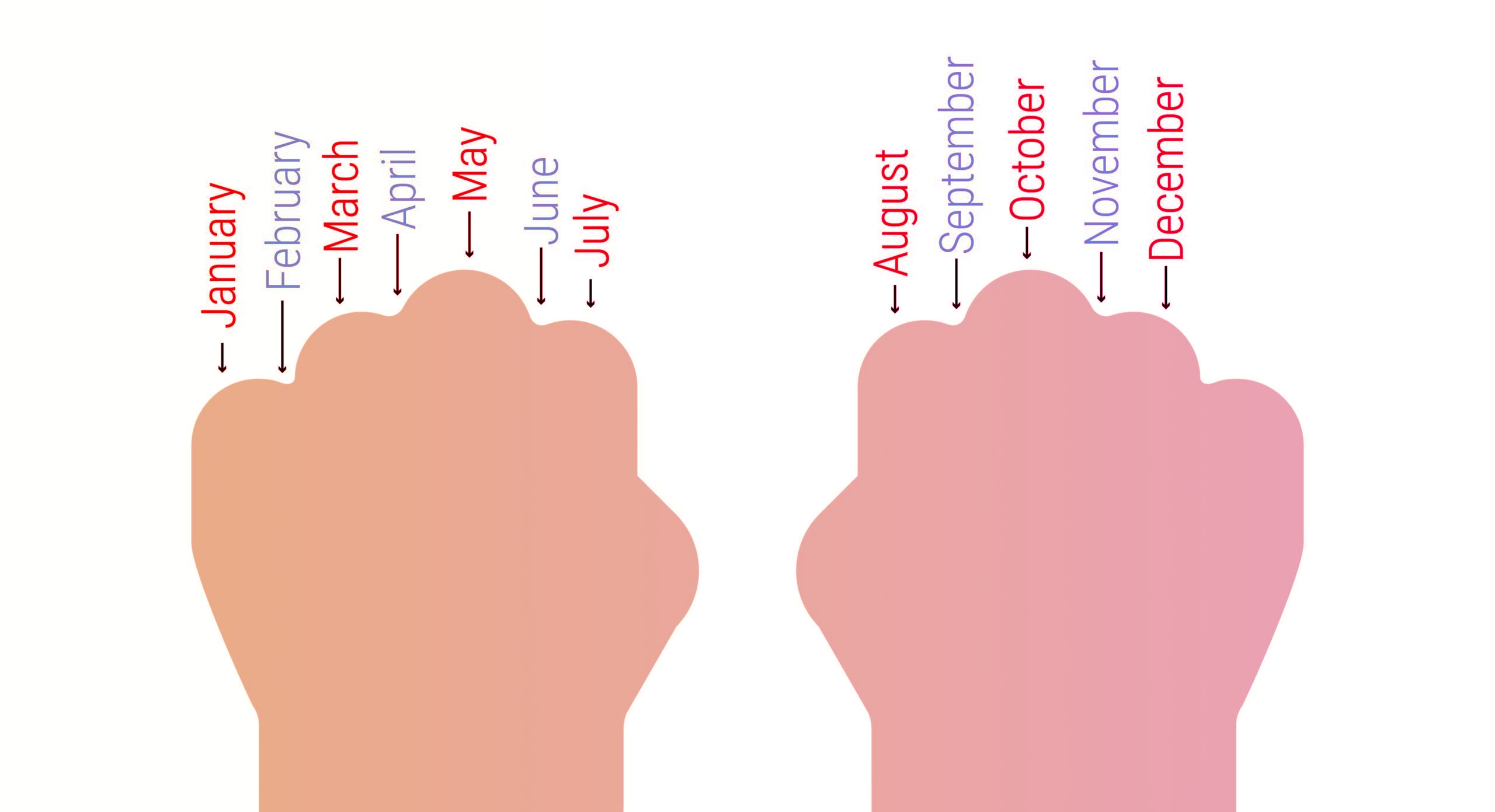 In both these methods you will assign each knuckle with a value of 31 days and each depression between the knuckle with 30 days, 28 days or 29 days.

In the single handed method you start from the first knuckle (little finger knuckle) as January and the adjacent depression as February and the next knuckle as March until the last Knuckle as July. Remember to say the months while doing this.

Now repeat this again by coming back to the little finger knuckle (Now August) and then continue until you finish all the months.

There is another variation In this method where you could also reverse your direction of counting once you reach the last knuckle instead of starting from the little finger knuckle after reaching July.

In this second method you can use both your hands. You will need to make a fist and place your hands next to each other with the knuckles of your index fingers touching each other.

Just like in the previous method you can start from the small finger knuckle saying January and then when you reach the last knuckle of your hand jump to the next knuckle (index finger knuckle) on the second hand and then continue to complete the months.

What is a leap year?

In the Gregorian Calendar one year is not equal to 365 days. There is a quarter of a day in each year that gets carried over. That is why after completing four years you end up with four quarters of a day which is the same as a whole day. This day is what gets added to February thereby giving 29 days in that month when it is done. That year when February has 29 days instead of the usual 28 days is called a leap year.

How to calculate the next leap year?

For most of the years once you add 4 years to a leap year you get the next leap year but that does not hold true when you consider long spans.

Here is a simple way to calculate leap years:

If your answer is a Yes after the above three checks then the year under consideration is a leap year.

In the above table, notice how 2100 failed to appear as a leap year. This is because despite the year being divisible by both 4 and 100 it was not divisible by 400 and hence is not a leap year.

So there you have it! Once again we see that history lives on with us even today. The Roman emperors who made the first calendars may be long gone. But the legacy of their culture still lives with us today in the form of the modern calendar! Want to know more about culture, history and geography? Check out the BYJU’S social science videos here!

1. Why is August named August?

2. Who is June named after?

June is the sixth month of the Gregorian calendar. It was named after Juno, the Roman goddess of childbirth and fertility.

According to tradition, Romulus, the legendary first king of Rome, oversaw an overhaul of the Roman calendar system around 738 BCE. The resulting calendar, whose structure borrowed heavily from the ancient Greek calendar system, had only 10 months, with March (Martius) being the first month of the year.

4. Who is the month of April named after?

The origins of some months were debated even by the Romans themselves. One tradition had it that Romulus named April after the goddess Aphrodite, who was born from the sea's foam (aphros in Ancient Greek).

5. Who is the month of May named after?

May was named after the Roman goddess Maia, who oversaw the growth of plants. Maia was considered a nurturer and an earth goddess, which may explain the connection with this springtime month.

Wow I good information about the months ??

Wow…!!! Its really nice I don’t have any information about this… Really a new and interesting information…… For me…!!

Very nice information as it helps us from now to use calendar not just to refer dates but now we also know that from where these names come from !!

Unbelievable.????Really Amazing.????Now I understood how these months got these names??

Wow! I didn’t know that these months are older than I thought they were!??