Why is Space so Hard?

At some point or the other, we have all gazed into the night sky and asked ourselves, “What’s up there?” While we’ve  got a closer look at the space through numerous space-themed movies, they often don’t show us the many challenges of space travel. With several missions led by NASA, ISRO and now the privately funded SpaceX, we have managed to find answers to many questions and have gained a deep understanding of space travel over the years. But, when did it all begin and what are the challenges that still loom over us?

Our long time plan of travel to space took its shape towards the latter half of the 20th century when rockets powerful enough to overcome the force of gravity were first developed. This paved the way for space exploration, giving mankind an opportunity to look beyond our planet. Soon in the 1930s and 1940s, Nazi Germany saw possibilities in using long-distance rockets as weapons. Once World War II got over, the Soviet Union (what is today Russia) launched their first artificial satellite, Sputnik 1, on 4 October 1957.  Soon after, on 12 April 1961, Soviet cosmonaut Lt. Yuri Gagarin became the first human to orbit the Earth in Vostok 1. Since then, space exploration has become a popular way for several countries to install satellites, land on the Moon, and look for habitable environments on other planets. 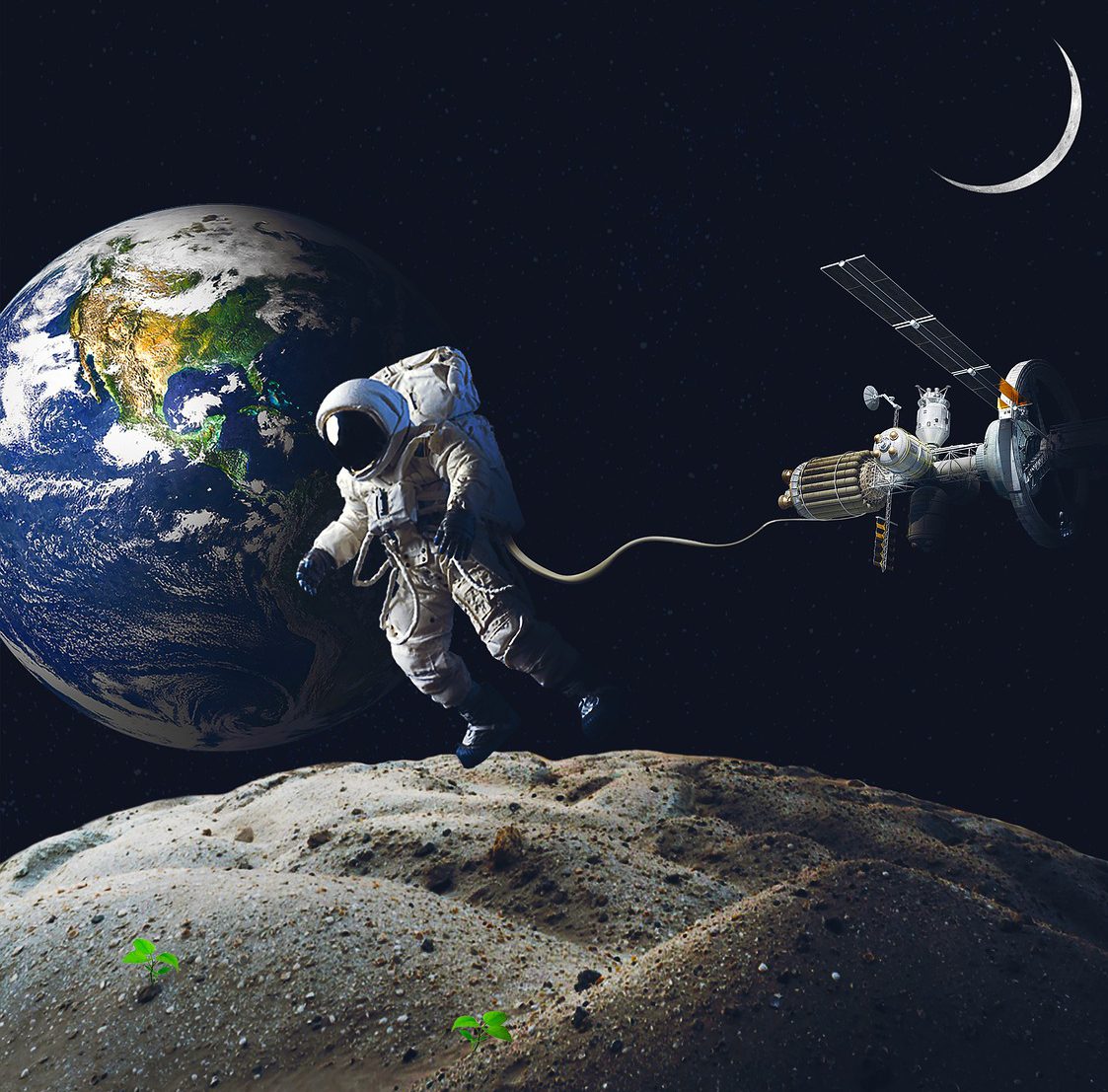 But space exploration is definitely not an easy affair. It is infinitely more hostile to human life than the surface of the sea. And to top it off, it is extensively expensive to carry out each space mission. Although we have made some extraordinary leaps in space travels, exploring habitable planets like Mars, our best minds are still working on the most efficient ways to get around some challenges of space travel. Today, let’s take a look at some of these challenges:

Getting off the Earth might be a big dream, it is not too easy a task, especially because of Earth’s fundamental force – it’s gravity. To leave its gravitational pull and exit the atmosphere, the object must reach Earth’s ‘escape velocity’ (the minimum speed needed for a free, non-propelled object to escape from the gravitational influence of a massive body), meaning it should reach a speed of 40,270 kmph. It’s definitely not cheap to carry out such a mission. For example, when ISRO launched the Mars Orbiter Mission (MOM) on 5 November 2013, it cost approximately ₹450 crores. (Guess what, that was supposed to be the least expensive mission carried out by ISRO so far!)

But with cutting-edge technology and new methods of reusing parts of a rocket after its launch, the overall cost of missions is being cut down. For instance, SpaceX Falcon 9 is designed to be reused, and they used the same methodology while recently launching two NASA astronauts into space.

Rocket engines cause violent vibrations during launch. This vibration is produced by the burning of the rocket propellant in the first stage called “booster”. These vibrations or oscillations are so strong that it can cause a threat to both the rocket and its payload (including astronauts). NASA has been trying to tackle this potentially fatal issue since the launch of Apollo. One way of somewhat tackling this issue is to conduct proper testing of the space-bound components and systems on Earth before launching.

The challenge doesn’t end with a successful launch. Once the rocket is up in outer space, it encounters a lot of uninvited space debris (also known as space junk or space pollution). Collisions with this debris can be hazardous to the spacecraft, especially if it’s a collision with a huge satellite. Although all the spacecraft are protected by Whipple shields (a type of hypervelocity impact shield used to protect crewed and uncrewed spacecraft from collisions with micro-meteoroids and orbital debris), solar panels, which are exposed to the Sun, a small impact can have a disastrous effect.

Fun Fact: Did you know that there are 2,666 satellites currently orbiting Earth.

Yes! You read it right. A spacecraft travelling across the solar system uses deep space navigation that sends precisely timed radio signals back and forth to Earth. Navigators on Earth track its location and speed and transmit course adjustments. Hence, before and during a space mission, the team carefully plots the course, duration, and route of the spacecraft by mapping the location of the planets, moons, and the Sun, whose gravitational pull can affect its trajectory. In 2018, NASA invented a new type of autonomous space navigation called Station Explorer for X-ray Timing and Navigation Technology, or SEXTANT. This uses X-Ray technologies to see millisecond pulsars. These pulsars are highly magnetised rotating neutron stars that emit beams of electromagnetic radiation out of its magnetic poles, far across the cosmos. The SEXTANT uses these pulsars like a GPS to navigate.

On Earth, although an engineer’s mistakes can be fixed as they arise, the same is not the case in space. Engineers need to build and develop a spacecraft with utmost care as there are no repair options once they are launched. There have been many mishaps that have taken place in the past. One such instance was the tragedy of space shuttle Columbia carrying seven American astronauts (including Indian origin astronaut Kalpana Chawla). The shuttle had a hole in its left wing during its launch which caused a blast destroying the shuttle along with the astronauts, while returning from its mission.

‘Space is hard’ is a frequently used phrase every time a space mission fails. But that doesn’t stop humans from trying again and again until they achieve success. Constant trying and strong determination have always been the key ingredients to their success.

What do you feel about space exploration? Will it be as easy as a road trip in the future? Do let us know in the comments below.

Is it possible to create artificial gravity in space?

How Do Astronauts Live In Space?

It’s really amazing. My ambition is to become an Astronaut

It might happen that space travel becomes easy in future…All thanks to our respected scientists!!

Thank you byju’s for giving us so much knowledge about space !

Byjus premium is really very amazing and solves our doubts

Now I feel like space is not that easy. But because of byju’s I got that information. Byjus Premium is a really amazing app!!!

It takes the people of earth atleast 2 centuries to travel across space because they should first tackle the huge problems on earth like the current pandemic, fuel crisis, climate changes etc. Scientists must find a technology where we can use the non renewable resources to ignite a rocket and for its energy. And that day we can explore the universe with no difficultly

Very interesting. Thanks for the info.

This information taught me alot about the space difficulties.???

I was not aware of this. If we can’t live in space than how astraunats live

It’s my dream to take the job of that engineer who designs a rocket. I want to feel the adventure , the threats , the mental pressure u r in when the lives of all the people rest in ur hands !!!!

That’s really awesome to hear about these things

It was a great information ? about space ?, it actually gives the information about the struggle of spacetravelers to achieve the goal

This is so fascinating? Since I wanted to become a space scientist from childhood, I wanted to know a lot of things about the space, and one day my dad brought me Byjus Premium..It was the best gift of my life..It is helping me a lot even today..and it made me clearly see my ambition in front of my eyes…Thank you ? Byjus….I do highly recommend every child to bring in the best learning app❤️

It was interesting, inspiring and informative

Wow its awsome to know about the space and its difficulties ……. Well i am very much afraid of space alredy you know. When i was small one day i saw black hole in tv and burst into cry.

I really love taking risks. After all space travel might even cost my life but facing the challenges makes me really who I am. My biggest dream is to visit space and I want to be a space scientist.

There is also no Oxygen in outer space, and the Oxygen inside the rocket is also limited! Here’s another space problem!

this is very risky work for the scientists . i think the children who want to make a scientist in his future this information is very important for him /her . although this is interesting but I want to become a doctor and help others.

It was very interesting ?. It made me think about different reasons what different things are more in space

It was very interesting ?

I think so that It’s very difficult to travel in the space ????. But thank you byjus for this information ??I came to know that how challenging it’s to travel in space.