Did you know – about 95% of the world’s fresh water comes from underground sources and as many as 100,000 different species depend on wetlands for their survival? So how important wetlands can be? 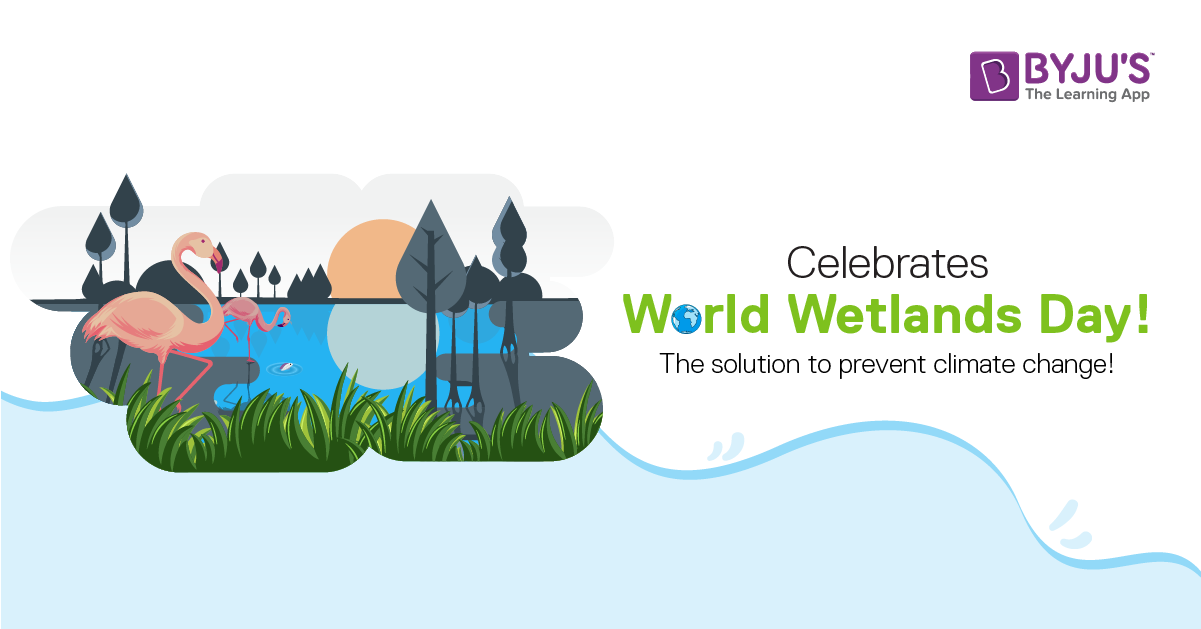 Wetlands are exactly how they sound: land covered by shallow waters. They occurs where water meets land, including ponds, lakes, reservoirs, creeks, mangroves and other water bodies. They exist in every country and in every climatic zone, from polar regions to the tropics, and from high altitudes to dry regions. However, they do all have one thing in common – they play an important role in the lives of humans and animals and prevents Earth’s rapid climatic change. In fact, they are nature’s purifier and helps bridge the gap between green and grey infrastructure in urban cities and makes our surroundings livable. 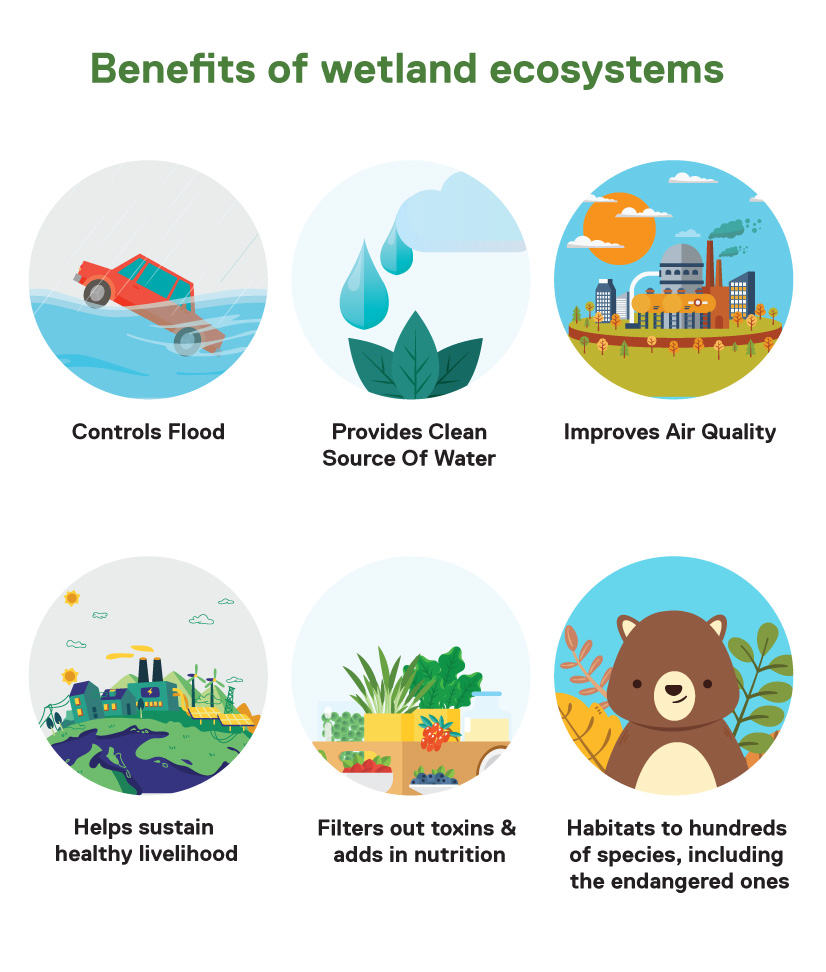 Sadly, over the years, about 50% of the world’s wetlands have  been lost or destroyed by humans. Thus, in order to save and protect the remaining wetlands, The Convention on Wetlands of International Importance was adopted in Ramsar, Iran on 2nd February, 1971. Since then the 2nd of February is celebrated as the world wetlands day, to create social awareness about the conservation and sustainable use of wetlands. This year, the theme ‘Wetlands and Climate Change’ aims to raise awareness about how wetlands can help prevent rapid climatic changes.

Thanks to Ramsar Convention, more than 5% of the earth’s surface today is covered with wetlands, with 56% thriving in tropical and subtropical regions of the world.  India alone is home to 26 such sites.

In order to create further awareness and add momentum to this movement, here’s a list of major wetlands in India, identified under Ramsar Convention: 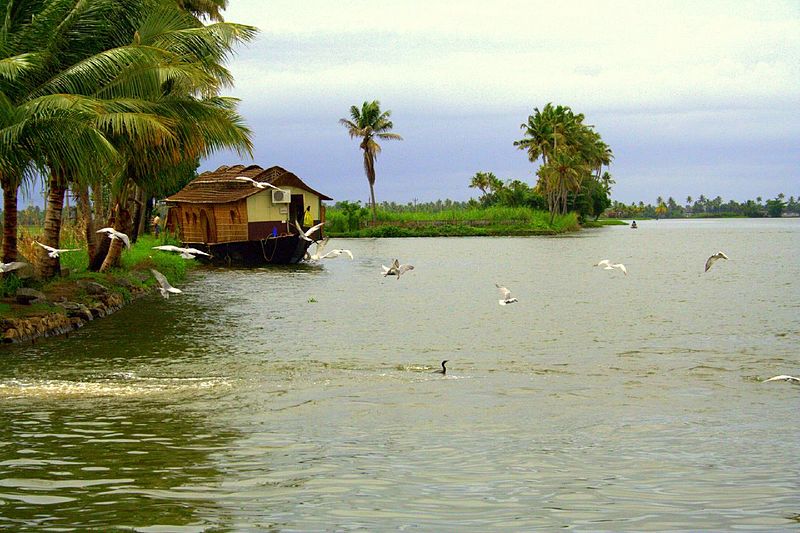 Vembanad Wetland (Kerala): The Vembanad Kol is the longest lake in India and the largest in Kerala. Home to more than 20,000 waterfowls and an ideal habitat for shrimps, Vembanad Kol is a famous tourist spot.

Chilika Wetland (Odisha): Brackish water lagoon, Chilika Lake is the largest coastal lagoon in India and the 2nd largest lagoon in the world. Its ecosystem is the largest home for Irrawaddy dolphin and migratory birds on the Indian subcontinent.

Bhoj Wetland (Bhopal): The Bhoj Wetland consist of two lakes – Bhojtal and Lower Lake, in the city of Bhopal. These lakes are home to a diverse flora, fauna and many remote species.

Ashtamudi Wetland (Kerala): Ashtamudi Lake is the second largest and deepest wetland ecosystem in Kerala. With a palm shaped extensive water body and eight prominent arms, the Ashtamudi lake is situated near the Vembanad Lake.

Kolleru Lake (Andhra Pradesh): Kolleru Lake is one of the largest freshwater lakes in India which is located between the Krishna and Godavari river delta in Andhra Pradesh. Home to a large species of wetland birds, the lake is also a common tourist spot.

Deepor Beel (Assam): Also spelled as Dipor Bil, this is a permanent freshwater lake and one of the largest ‘beels’ (a local word for lake) in the Brahmaputra valley of lower Assam. Surrounded by steep highlands on the northern and southern sides one gets to see varieties of migratory birds, wild animals and aquatic birds. 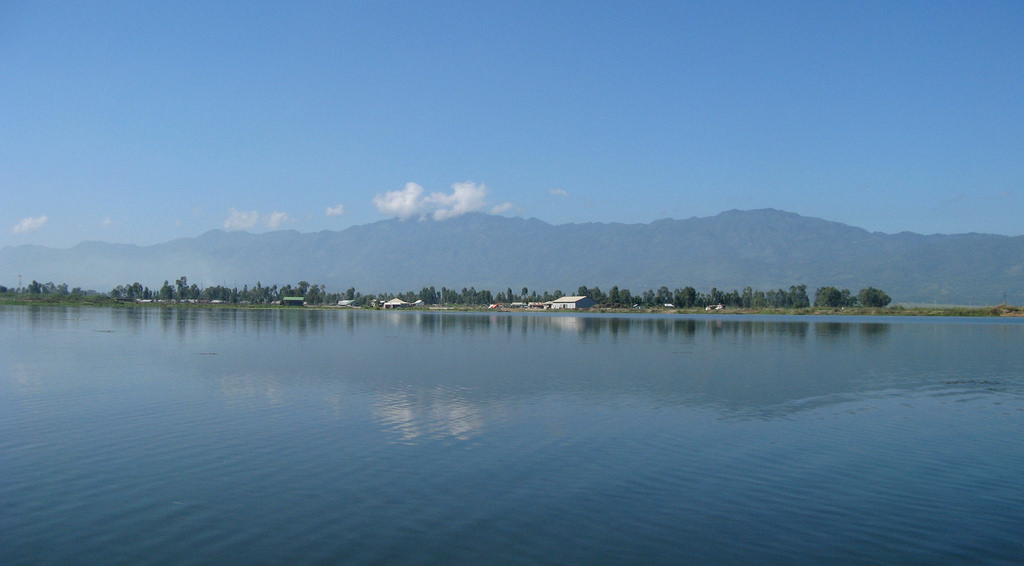 Loktak Lake (Manipur): It is the largest freshwater lake in Northeast India and is the last natural home of the endangered Sangai deer in India. The lake is also popularly known as ‘The Floating Lake’ due to the floating phumdis. Near the lake is the Keibul Lamjao National Park, which acts as a major tourist attraction. Both the lake and the park play an important role in the economy of Manipur.

Sambhar Salt Lake (Rajasthan): Sambhar Salt Lake is the largest inland salt lake in India, surrounded by the Aravali hills on all sides. The lake contributes significantly to the country’s salt production and is one of the best places to spot pink flamingos and other migratory birds.

While wetland ecosystems hold an important part of  the world’s biodiversity, they are rapidly disappearing due to various reasons. Some of the major threats are industrial and agricultural activities, along with tourism, dams, pollution and other human activities. Without these suitable wetland habitats, many species would soon be homeless and probably extinct! It’s time we take some action and work to conserve and restore these amazing ecosystems, which help us prepare for and potentially fight the adverse effects of climate change.

Here are a few things that we can do to save these beautiful wetlands :

So, take a step to protect these eco worries and help make the planet a better place!

Thank you byjus for this information.

You are amazing byjus. We are glad to read and explore new ways of improving.

Thanks for such a nice information

I got a very important information , so thank you and I will also try to share this message to all my near people

Thanks you for such valuable information…

February second is my birthday . Thank you byju’s for sending a useful information.

Thankyou for giving me this type of learning tree Tanaya Goswami

Thank you byju’s to share to tell us about this incedent taken place.
Good book, I appreciate Tanaya Goswami (Author) to give a good
information about the incedent.
Thank You
Samarth

We also need other information

It was an interesting and informative document .
I wasn’t knowing about the face that you told.
Thanks?

Thnx for such a valuable information.

thank you for giving such a nice information Byju’s

Thanks for telling so much about wetland

Very Nice .Useful for my projects Thanks a lot

Thank you Byjus for giving such an important
information regarding the endangered wetlands.
I will try my best to save the lives of these lifegiving wetlands.

Wetlands are really the eco warriors.Thanks a lot to team byjus for sharing this amazing information.

Thamks for this information which is really beneficial.
Please tell and send some more contest ..
Waiting…..?

Thanks byjus for a really big,great and valuable information
Really appreciated

Thanks team byjus for such priceless information about wetlands…

Thank you!! Byjus & Tanaya Goswami for this wonderful information……and would like to read more such informations!!!!?

Thank you for the information

THANK YOU BYJU’S AND TANAYA GOSWAMI 4 THIS VALUABLE AND NEW
INFORMATION….

THANK YOU BYJU’S AND TANAYA GOSWAMI 4 THIS VALUABLE INFORMATION….

The information you provided about wet land has been very helpful

Thanks you for giving a such a wonderful information

Thanks Byju’s for such a great information.
I will try my best to save the wetlands.

Thanks,byju’s for telling me a new thing ..such a amazing information

Thanks for the information

Thanks byju’s for realizing us the importance of saving these precious and beautiful wetlands.

Thanks for your kind information.

Thanks for your valuable information Byju’s

Thank you byju’s for such a beautiful information.
I will try to maintain the wetlands around our area.

These are valuable informations which encourage everyone to maintain our eco-system.
Thanks Byjus.

Thank you byjus for these valuable information and
I will also rise my hands to take care
of the wetlands.

Came to know about the importance and benefits of wetlands. Thanks Byjus..

Thank u byjus forgiving me such info. I will try to take care of it

Thanks Byjus I don’t know that our wetlands are helping us out this much. I will try my best to preserve our wetlands

Thank you Byju’s team for creating awareness in us ??. I will try to work on it and contribute in the nature’s development. ??

Thanks for giving this valuable lesson

Thanks for the great information

Your things are valuable and interesting

Thank you team byjus for giving such a valuable information.

Thank you team byjus for giving such a valuable information

ITS GREAT……INFIRMATIVE……AND A MESSEAGE TO WE KIDS

Thanks byjus for this valuable information and I will try to help our beautiful wetlands clean ??

Thank you Tanaya Goswami (The Author)
for giving us such nice information!

Thanks for such a valuable information