A Battle Can Be Won In More Ways Than One

A battle can be won in more ways than one, Dishti Dave looks at every battle in her life as a learning journey.

For a young 7th grader, life is full of possibilities and opportunities. It is the perfect age to mould the character of the growing teen, filling her up with talents and experiences. For Dishti Dave, the year of her transition from 6th to 7th grade was replete with her life’s biggest challenges. However, being the bright and sprightly student that she is, she took her challenges up with positive strides, making the best out of the worst. 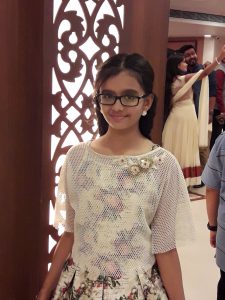 When one interacts with her first, she sounds a lot younger than she is, with the innocent voice and naiveté of a 3rd grader but on further interactions, we realised the stellar wit and grit behind the quiet demeanour. Hailing from the The Merchant’s Paradise of India and largest city of Gujrat, Ahmedabad, Dishti is an English enthusiast, with a knack for grammar. Though majority of her school life saw her excelling in English, her interests also panned towards Maths. Science had never been her favourite. However, after her introduction to the BYJU’S application, she realised that she had been missing out on a world of opportunities and learnings limiting herself to just Maths and English.

“BYJU’S has opened up a new world for me all together. With the multiple examples and the unique outlook the teachers have on different elements in life, it seems almost ridiculous that we never notice these things in our real life,” exclaims Dishti.

In winter of 2016, Dishti had to undergo an appendix surgery which left her weak and bedridden for two whole months. This implied that she could not attend school for sometime, and although she was allowed to take her examinations, keeping track of every class was hard. Due to the immense pain and strong medication, she could not indulge in any kind of physical activities; even sitting upright was often strenuous. Her mother became her main support system, metaphorically and literally. She wrote her assignments for her, helping as much as she could with her studies, scribing her examinations etc.

Dishti’s mother came across the BYJU’S learning app through an advertisement and realised that they may have found the best platform for their daughter’s education. They downloaded the trial version and fell in love with it instantly.

“Ever since I started using the app, there is something new I learn every day. Divya Ma’am and Vinay sir are my favourites. Every topic is explained in such an elaborate manner, there is no room for doubt. Out of the many intriguing explanations I have come across, the most unique one was the explanation of integers using Devil and Angels. I never knew such an explanation was possible, let alone practical. But there it was, and I don’t recall learning a chapter faster,” quotes an ecstatic Dishti. 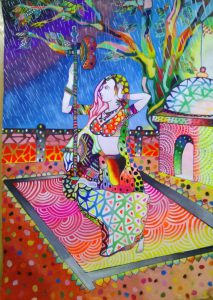 When asked about what inspires her in life, Dishti stated that history and stories from literature always impact her deeply. One of the chapters in her literature textbook, Robinson Crusoe, struck at the deepest chords of her heart with the struggle the shipwrecked man had to go through and how he overcame his fears. History on the other hand, brings out the more dreamy side of Dishti. Stories of rulers and their queens and royal families who existed on the same land that we now tread on. She looks at them as fairy tales, not impossible, but distant from reality. She often wonders what life would have been like in those times, among those who made history.

During her long bed rest, Dishti worked towards improving the one thing she was best at- sketching and painting. This gift came to her naturally at a young age and she already plans on a future in Fashion when she hopes her drawings will take shape in reality. She experiments between different activities to expand her reach and knowledge of different fields from playing the keyboard, to dancing, to Olympiads and quiz competitions in school. “Competitions are one of the few things I always keep myself up to date with in school. It isn’t just fun to take part in them, but there is always something new to learn. If I win, my parents and I have something to be proud of, but if I lose, I know I gained in some way, standing against someone who knew more than me. I strive to better them in the next run.”

Along with her everyday routine of completing home-work and piano classes, Dishti makes sure to spend at least an hour on the BYJU’S app so that she is well prepared for lessons to be taught in the future in her class. She states that the demonstrations given in the modules along with the unique examples, help break down each topic to the basics- The example of a pizza used to explain fractions, simple yet constructive, manages to give the best explanation possible with a visual context. She also denotes gratitude to her mentor who appreciated every effort taken on her behalf and encouraged her to never give up on her fight for perfection in academics. He suggested she start with the first quiz when attempting a particular chapter which eventually helped guide her learning process. 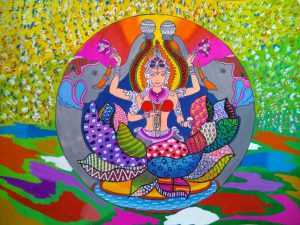 Apart from her education, friends and family are the most important pillars of any child’s life Dishti believes. According to her, her struggle post-surgery was reduced by half because of the constant support of her parents who doted and obsessed over every need of hers. Along with their constant love and guidance, she braved through her examinations and moved on to the 7th grade where she continues to use the BYJU’S app, her constant study companion. She believes that as long as she stays focused on her dream of becoming a fashion designer, and gives it all her attention, there is nothing that can stop her achieve her goal.

Special thanks to Brijendra Singh for being her mentor from BYJU’S and helping Dishti learn better.

Like this story? Read similar stories on BYJU’S blog page.

Ankita Dutta is a STORYWEAVER at BYJU’S. Avid reader and writer by day, a classical singer by night, Harry Potter nerd, a film aficionado, and the classroom joker in her yesteryear. Ankita believes that words can influence to a point where they change personalities and ideologies. Wish to contact her about intriguing debates, writing trends and stories? Drop in a mail to storyweavers@byjus.com

> What's Shreejeet’s secret to scoring 98.6% in the board exams?

> What's Shreejeet’s secret to scoring 98.6% in the board exams?