Did you know about these ‘nature’ inventors?

Around 23,000 years ago, civilisations started growing their food. They progressed from growing wild weeds to harvesting edible cereals, such as wild emmer wheat, wild barley, and wild oats. Slowly and gradually, they started making numerous tools to cut these crops and expanded their agricultural products. They moved from resting under tents made of ox hides to tiny huts made of mud and hay. From draping their body with leaves and thick fur blankets they moved towards weaving and knitting various animal and vegetable fibers including wool, linen, cotton, and silk. With change in each civilization, came in a new development – be it in agriculture, clothing, housing or even traveling. Now, we might not know the exact time of these changes, but we are sure that they drew all their inspirations from nature. Perhaps they admired how animals survived using their amazing skills and physical attributes and tried to employ some of their skills or at times, even mimicking them.

For several centuries since then, nature continued to inspire us. For instance, birds inspired us to fly, animals taught us how to hunt, and tiny termites and honey bees demonstrated building skills that we could adopt. But that’s not all! Nature also inspired scientists and inventors to adopt some of the rarest features of nature into advanced forms of technologies and life-saving products.

Wondering how? Hop in, as we explore some marvels in the field of technology that drew inspiration from nature.

You must have heard about Japan’s Shinkansen (bullet train). The 515-kilometre Tokaido Shinkansen is the world’s busiest high-speed-rail line that travels at a speed of over 200 kilometres per hour. Do you know what happens when a train travels at that speed? There can be two strong consequences.

For the train to keep up with such a high speed without causing the wheels to vibrate or make a loud noise, the trains need to be as aerodynamic as possible. This is the reason why front cars of the Shinkansen trains are tapered like a long narrow beak -resembling the beak of a kingfisher bird!

But you wonder what this silent hunter’s beak got to do with a bullet train? 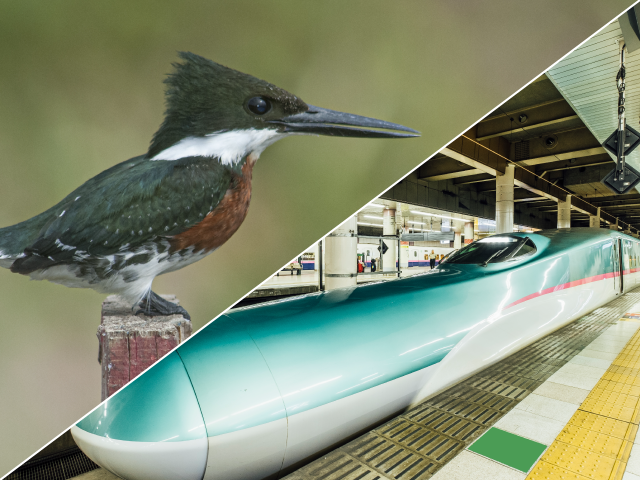 Japan’s Shinkansen trains (bullet trains) draw its inspiration from kingfishers. The front cabin of these bullet trains resemble the beak of a kingfisher bird.

Well, the idea started with Eiji Nakatsu, a Japanese engineer with West Japan Railway Company, who was working on the new 500-Series Shinkansen in the 1990s. Apart from being an engineer, he was also an avid birdwatcher and would often attend lectures on wildlife. In one such lecture by Seiichi Yajima, a fellow engineer and a member of the Wild Bird Society of Japan, Nakatsu learned how aircraft technology is based on the studies of the functions and structures of birds.

What struck him the most was the hunting techniques of this tiny bird – the kingfisher. The bird has a spectacular ability to dive into the water to catch fish, crustaceans, amphibians, and reptiles. Its technique is especially impressive because it does it with no or very little splash. Moreover, when the bird transits from flying through the air (a low-resistance medium) to diving into the water (a high-resistance medium), its long beak increases in diameter gradually from the tip to the back as it plunges to catch its next meal. For Nakatsu, this was a eureka moment. Using the same concept, he could not only make the Shinkansen travel fast but also reduce the sonic boom effect.

Dolphins and bats have a unique talent that may be cooler than a kingfisher’s beak. They use their ears and mouth to perceive high-frequency sound waves, which allows them to swoop around obstacles, find their friends, and also catch their favourite food. Wondering how? Bats use a phenomenon called echolocation through which they make sounds that echo back. This helps them to detect detailed information about the location and even identify the obstacles in their surroundings. Similarly, dolphins use their sonar system to navigate, hunt and forage. 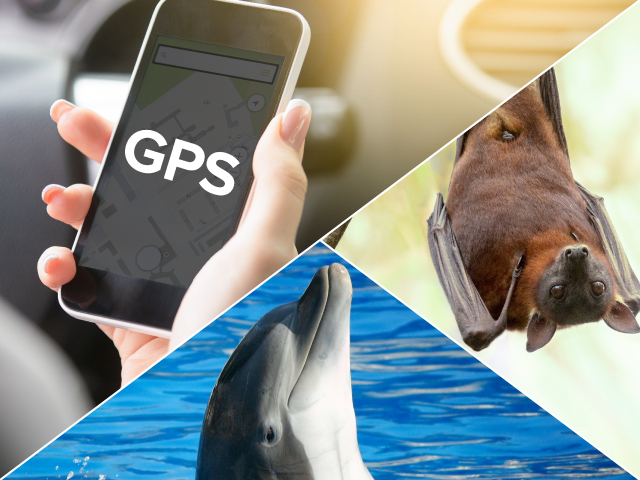 Underwater sonar system draws its inspirations from bats and dolphins. bats uses a phenomenon called echolocation and dolphins uses the phenomenon of sonar vibration to detect their path, avoid obstacles, as well as hunt for food.

Scientists have converted these amazing phenomena into creative numerous technologies. For instance, the UltraCane is such an invention that uses ultrasonic waves that reveal the location of obstacles. The cane vibrates as soon as it gets near any obstacles, helping blind people ‘see’ where they are going. Similarly, the sinking of the Titanic in 1912 prompted researchers to develop technology to detect objects underwater. Today the sonar system is used in underwater surveys and pipeline inspections to detect damage.

Have you noticed how you can easily peel off a tape without leaving any residue? Believe it or not, you can thank geckos for this phenomenon. These tiny lizards have millions of microscopic hairs on the bottom of their toes that allow them to stick to any surface without adhesives. These hairs have split ends that interact with the molecules of the climbing surface, thus enabling them to climb on any vertical surface. All they have to do is change the direction of their hairs to move forward. 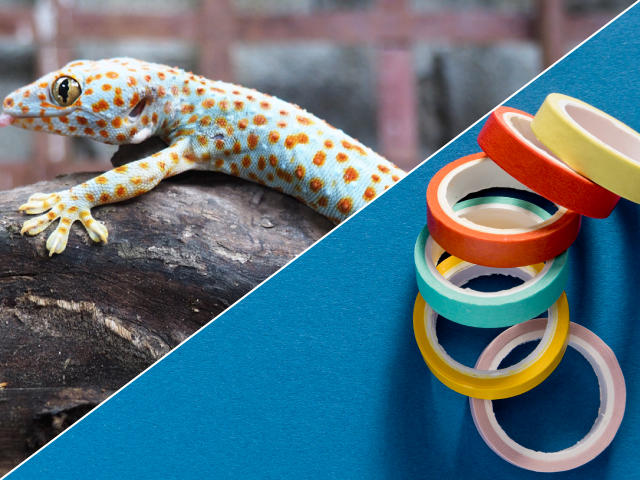 The same phenomenon clubbed with technology is also used on robots to make them cling to the most improbable surfaces like glass.

If you are extremely close to fishes, you must have noticed how they move in unison. They form a diamond shape, where the leader cuts through the water current and makes it easier for those behind to swim. The same method is also used by flocks of birds that always fly in a V-shape. 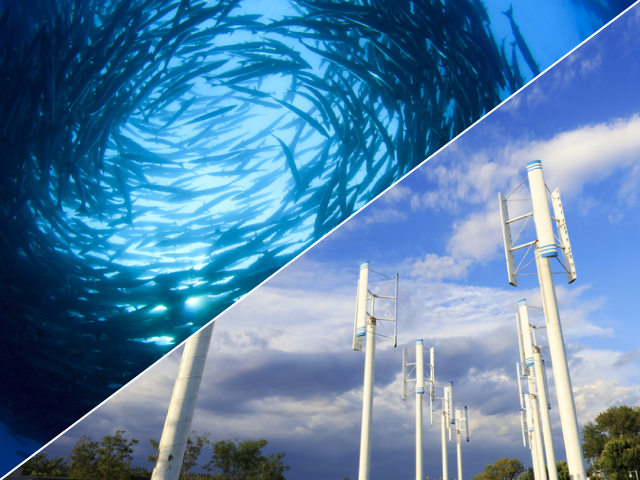 This phenomenal idea hit John Dabiri of Caltech, who was designing a new wind farm. His used wind turbines that were oriented to rotate around the support of each other, instead of twirling like a pinwheel the way a typical wind turbine would move. This helped him conserve energy in the process. Do you know that this phenomenon is even familiar to fans of bicycles? Can you tell us how?

Even plants have inspired several inventors. One of them is the hook and loop idea by the Swiss engineer George de Mestral. It so happened that one day he went for a hike with his dog. During the hike, many burrs from burdock plants got stuck to his pants and his unfortunate hunting dog. He tried to brush them off but found it extremely challenging. Fascinated, he looked at the burrs under a microscope and found that they were covered in very tiny hooks that managed to catch on the loops in the fabric of his pants. This inspired him to come up with a ‘zipperless-zipper’ which is today known as Velcro (combining the words velour and crochet) brand hook and loop. Although over the years zipperless-zipper caught the public’s curiosity, it was NASA’s use of Velcro that caused its boom in popularity. 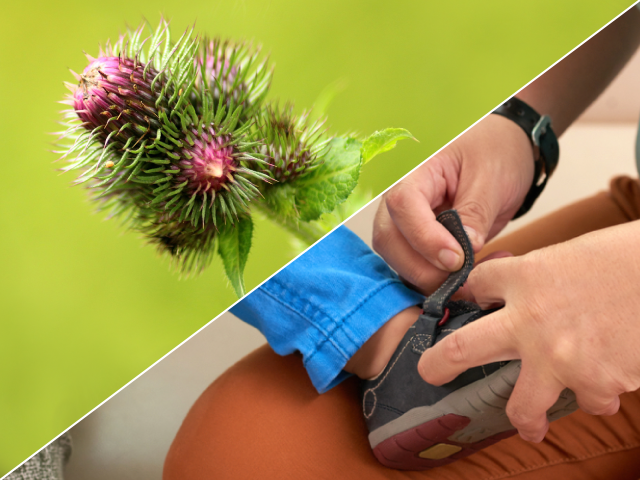 Nature, being a huge classroom, offers many lessons to those who take time to reflect, learn, and adopt. Did you learn something from nature too? Do tell us in the comments below.