Why Is the Titanic Still at the Bottom of the Ocean? 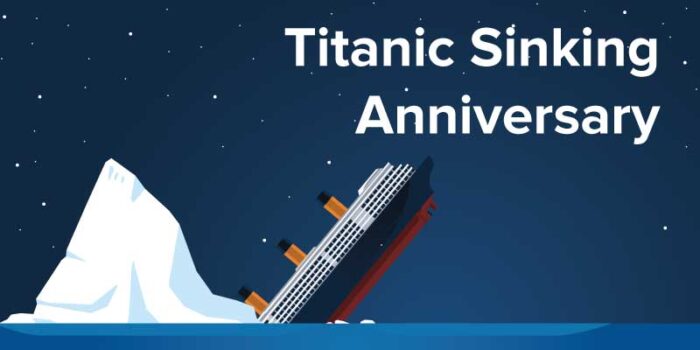 The word Titanic evokes thoughts of something epic but at the same time sad. When we hear this word, the first thing that comes to our mind is the infamous and ill-fated ship, the RMS Titanic.

It was 109 years ago on 15 April, 1912 that the “unsinkable” Titanic sank in the North Atlantic ocean, just four days into its maiden voyage.

RMS Titanic was the largest passenger liner at the time, and was considered unsinkable. It had an estimated 2,224 people on board when she struck an iceberg at around 11.40 pm on Sunday, April 14, 1912. 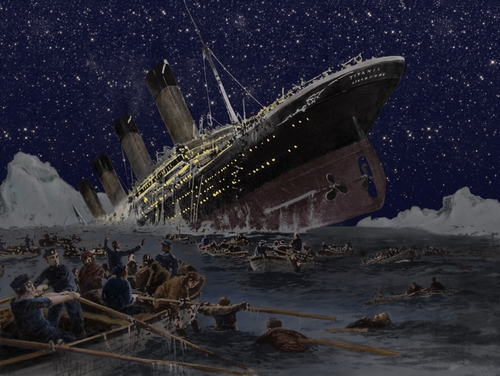 Sinking of the Titanic Illustration by German artist Willy Stower, 1912

The collision destroyed the lower part of the ship that was meant to keep her afloat. It took just two hours and forty minutes for the 269 metres long and about 28.2 metres wide ship to sink and disappear into the depths of the ocean. The tragedy resulted in the deaths of more than 1,500 people, making it one of the worst marine disasters in history. 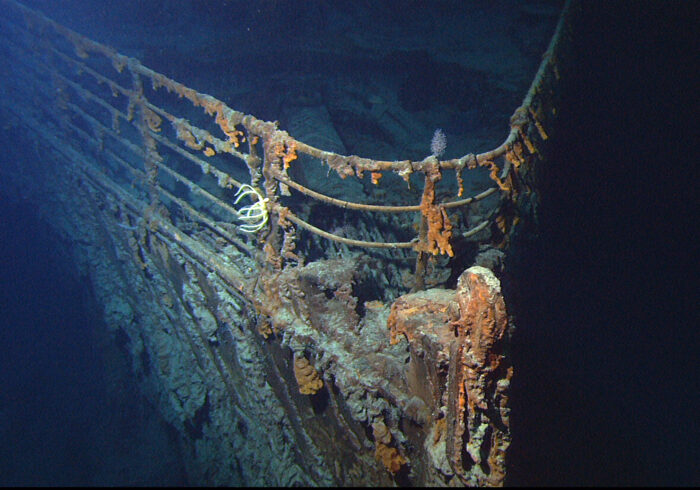 Efforts to locate and salvage the Titanic began almost immediately after it sank. But technical limitations—as well as the sheer vastness of the North Atlantic search area—made it impossible to find the ship in the depths of the ocean.

Various attempts were made throughout the years to locate the wreckage of Titanic but they all resulted in failure.

Later, in the year 1985, explorer Robert Ballard and his team set out to locate the wreck, this time with an experimental, unmanned submersible called Argo.

In the early morning of September 1, Argo was investigating debris on the ocean floor when it suddenly passed over one of the Titanic‘s massive boilers, lying at a depth of about 13,000 feet.

The next day, the body of the ship was discovered nearby. It had split in two, but many of its features and interiors were remarkably well-preserved. Debris of all shapes and sizes were scattered over a two-square-mile radius around the ship.

For 73 years the wreckage of the Titanic had been lying untouched at the bottom of the sea. And finally

the world could see the water abode of this epic yet tragic ship.

The wreck was subsequently explored by manned and unmanned submersibles, which shed new light on the details of its sinking. The Titanic is now routinely explored, and several thousand artifacts have been recovered from it.

Titanic’s parts are being lost to the sea 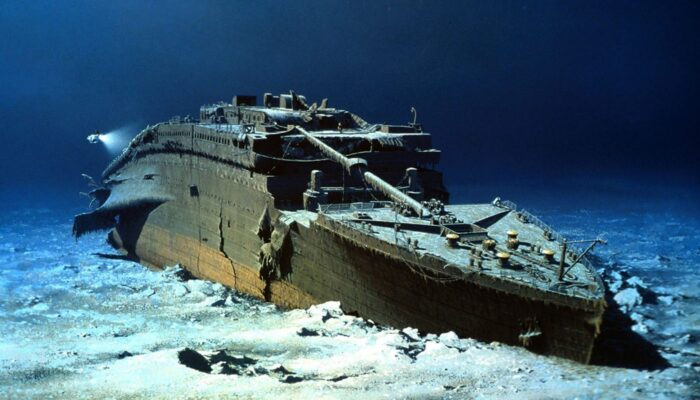 In August 2019, divers filmed the wreckage over a series of five dives. It was the first time that people had returned to the Titanic in 14 years.

The expedition revealed that Titanic is decomposing rapidly. Yes, like all things, eventually, Titanic will vanish entirely. While parts of the wreck were in surprisingly good condition, other features had been lost to the sea. The captain’s bathtub, which has remained a popular image among Titanic enthusiasts – is now gone. Titanic’s crow’s nest—from which lookout Frederick Fleet spotted history’s most infamous iceberg—has also disappeared forever. 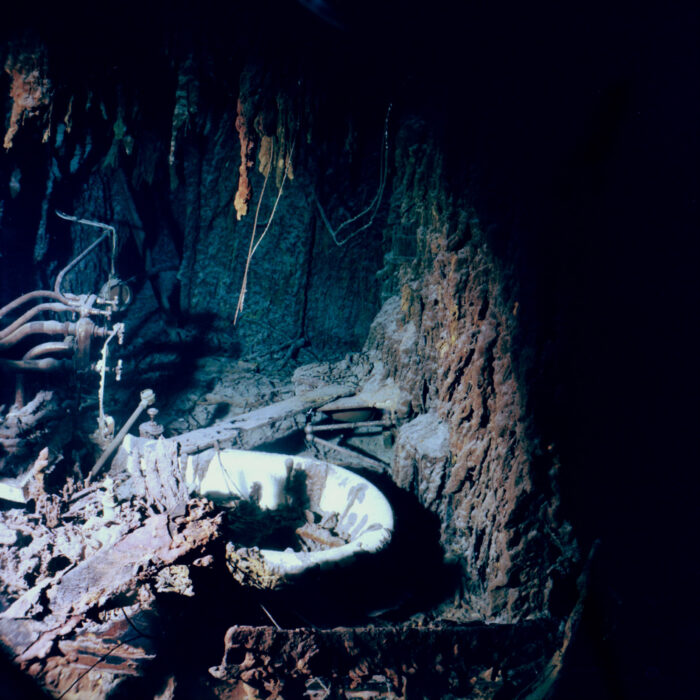 The partly collapsed bathroom of Captain Edward Smith, with the bathtub now filled with rusticles

On the ocean floor, Titanic is at the mercy of several natural underwater processes.

First of all, the ship has been underwater for more than 100 years, lying 3,800 meters down in the Atlantic Ocean. Strong and unpredictable currents at the seafloor are taking a toll on the wreck.

The strong currents are going back and forth and working on the wreckage 24 hours a day. It is like when a hurricane moves a tree for a few hours on all sides, finally the tree is gone.

Then there is the saltwater acidity that has been dissolving the vessel, compromising its integrity to the point where much of it would crumble.

But there is something else too that is eating the Titanic: bacteria. 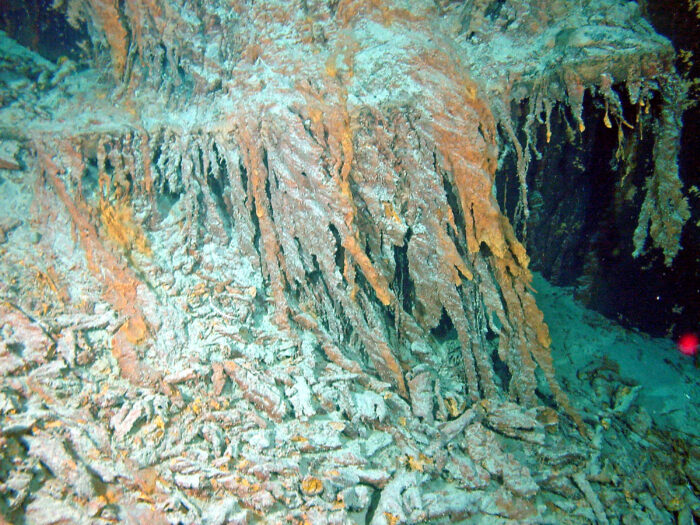 Microbial biologists say that much of the deterioration comes from a group of bacteria, named Halomonas titanicae. These bacterias are working symbiotically to eat the iron and the sulfur.

When these iron-loving bacteria munch on the steel of the sunken ship, they cause stalactite-like structures to form on the wreck. These rust-colored icicles are (appropriately) called rusticles.

Based on this new expedition, scientists believe that the Titanic has only 30 years left before it completely disappears and returns to the sea.

Can we raise the Titanic from its watery grave? 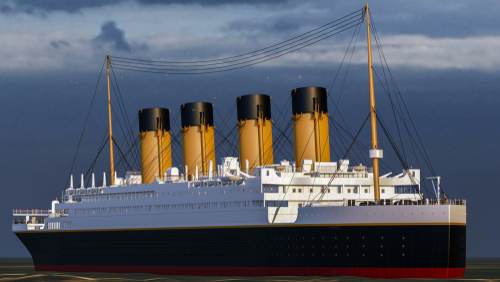 Sometimes, resurrecting relics from the tragic chapters of history is about as fanciful as getting pigs to fly. It’s just not worth the effort. Such is the case with the notions of raising the Titanic.

There’s been no shortage of geniuses out there who had their own ideas about how to bring the ship back to the surface.

Some suggested seemingly feasible ideas, such as using cranes mounted on salvage vessels. Others were rather bizarre, like filling Titanic with ping-pong balls, attaching helium-filled balloons to the hull, and freezing the ship like an ice cube until the wreck would float.

After several trips back to the drawing board, it turns out that raising the Titanic would be futile.

After a century on the ocean floor, Titanic is apparently in such bad shape it couldn’t withstand such an endeavor for a variety of reasons.

Firstly, as mentioned above, the ship sank to roughly 13,000 feet. That’s a long way down; in fact it’s over 3 kms at the bottom of the Atlantic Ocean. It’s pitch black and hard to access with extremely high water pressure.

The ship also snapped into two pieces, which actually lay 1,970 feet apart from one another on the ocean floor. Why the two parts are so widely separated remains a mystery. 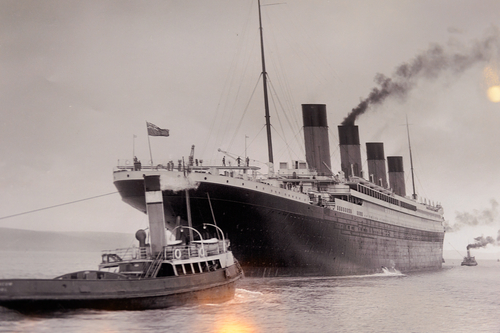 On top of this, extensive rust and saltwater acidity has been dissolving the vessel, compromising its integrity to the point where much of it would crumble if tampered with.

And then there are those arguing that regardless of whether it can be raised or not, committing to such a task would be highly unethical. The ship belongs to the ocean now, where it feeds the marine life.

The Titanic lies on a gentle slope of the ocean bed, overlooking a small canyon below. There is no light at this great depth. It is a quiet and peaceful place—and a fitting place for the remains of this greatest of sea tragedies to rest.

It is very interesting that how it is underwater