How 2019 Nobel Prize-Winning Work Affects Us

The Nobel Prizes for 2019 were announced last week and we have a fresh set of icons joining the ranks of Nobel Laureates.

The Nobel Prize is considered to be the most prestigious award in the world and is given for outstanding work in the fields of physiology or medicine, physics, chemistry, literature, economics, and activities that promote peace.

Let’s look at the outstanding works that won the Nobel Prizes and more importantly let’s have a look at the application and impact of these award-winning works. 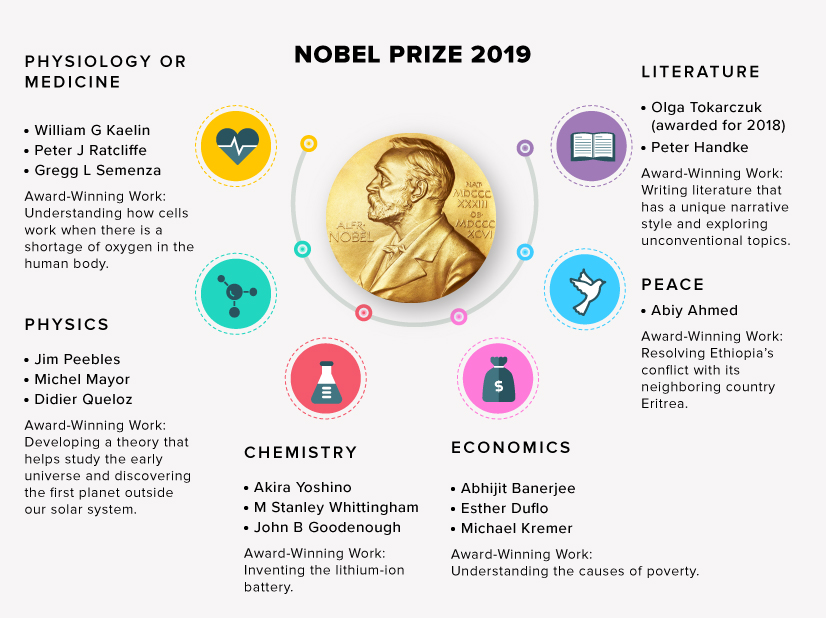 Now, let’s have a look at the impact that these award-winning works have on our lives.

Understanding how cells respond to a low supply of oxygen will help in treating anemia, cancer and heart diseases. People have been living in high altitude areas for ages (where oxygen is low), and we’ll finally know how their bodies work.

The theory to understand the early universe will help scientists study how the universe was after the Big Bang. And as we explore the universe more and find more planets it is fascinating to think that some of these planets may also have life on them!

Almost all the digital devices we use today that can be recharged with electricity has a lithium-ion battery developed by these scientists. Cellphones, laptops, music players, cameras, the list is endless. Their invention was so ground-breaking, that even after 40 years, the whole world still uses lithium-ion batteries as the main type of rechargeable battery.

These writers are known to write about what they passionately believe in. Their work has also provided an important platform for people to discuss politics and different life experiences.

Abiy Ahmed, the Prime Minister of Ethiopia, signed a peace deal with Eritrea that ended 20 years of conflict with the neighboring country. Ethiopia is one of the poorer countries in the world and is still developing. Important work from Ahmed that brings peace to the country can help the people of Ethiopia have a bright future.

The research by these economic scientists showed how to improve the standards of education in schools and how to increase the number of people who get vaccinated in society. This finding can be applied to help various countries better their standards of education and healthcare. This can positively impact the lives of countless people across the world.

The research done by scientists lay down the foundation for us to make our lives better and the Nobel Prizes recognize them for this very reason.

Would you like to pursue research when you grow up? Let us know in the comments.

Deepthi is an ambivert who is on a steady diet of good food, filter coffee, and self-improvement. Being an ardent reader, storytelling has been her first love and she enjoys exploring how to convey stories compellingly. Having studied psychology and experienced the learning and development field, Deepthi is driven to understand human behavior and to know what makes each of us unique. You are most likely to find her tucked into a cozy corner at a local cafe with a Kindle or a book in hand. If you find her there, stop by and say hello, she'd be eager to learn your story too. Until then, you can ping her at storyweavers@byjus.com for anything you may like to share.