The fascinating history behind the world’s most watched ball: The Football

Do you know what transformed football from just a sport into a global phenomenon? Yes, it had to do with the unbound popularity of sensational players like Ronaldo, Messi, Neymar, Rooney, and Fabregas. But there is more to the sport than the nail-biting leagues and the gripping world cups that have made it the most-watched and played sport on the planet.

What most fans don’t know is that football originated in 476 BC China and has since undergone centuries worth of evolution. So sit back as we take you from the ball’s humble beginnings to the international spotlight it finds itself in today.

It would be safe to say that much of the football frenzy also existed among our ancient ancestors. There is enough evidence to suggest that early Chinese, Egyptian, Roman, and South American civilizations played with a spherical-shaped ball made from either cloth, animal bladder and skull, or scarily enough — human heads! In fact, the Chinese version of the game — which FIFA acknowledges as the first codified ancestor of the sport — was called Tsu Chu. A representation of Tsu Chu being played in China (Image: Wikimedia Foundation)

We can all thank Charles Goodyear (Does the name ring a bell? The world-renowned tyre and rubber company is named after him.) for sparing us the horror of playing football with animal parts! Goodyear introduced the world to the first vulcanised rubber football bladder in 1855. He also created panels similar to today’s basketball and glued them at the seams. Prior to this, cow and pig bladders covered in leather were used extensively for the sport. This did not allow the players to aim well in a certain direction and also took away the key factor of bounce from the ball. 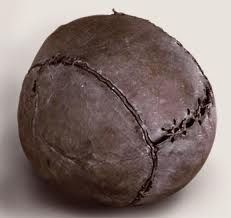 A football made out of pig bladder (Image: Pinterest)

The English Football Association (FA) standardised the official weight and size of the football in 1872. It described the ball as “spherical with a circumference of 27 to 28 inches”. Additionally, the weight was defined to be 13-15 oz and later changed to 14-16 oz in 1937. The association already required the ball to possess an “outer casing of leather or other approved materials”. The ball used in the finals of the first-ever FIFA World Cup in 1930. (Image: Pinterest)

Footballs in the early 1900s were far less tough than the ones we use today. Most balls back then would tatter and be unusable after a single match. In order to make them tougher, they were reinforced with tanned leather covers with 18 sections of six panels with three strips per panel. All this was hand-stitched together with an opening to insert the inflated bladder.

In the ‘40s, the focus shifted to how well a player could control the ball. Experts added strong and stable materials between the inflated bladder and the outer shell to increase durability and control while playing. Another problem faced by players was that most footballs were not water-resistant. That’s why for the first time they began to coat footballs with synthetic and non-porous materials to prevent water absorption.

Better visibility on the field was achieved with the official introduction of the white football by whitewashing leather. Interestingly there were also orange footballs for teams who played on snow.

The next two decades saw the football evolve into a completely synthetic object.
The architect, R Buckminster Fuller created the ‘Buckyball’ — a model that has been used till date to mass-produce footballs.

Adidas manufactured the Telstar ‘Buckyball’ with the classic 20 hexagonal and 12 pentagonal patches that are fitted and stitched together to form a sphere. It also featured the unmissable black spots designed to help players learn how to curve a football and track its swerve. 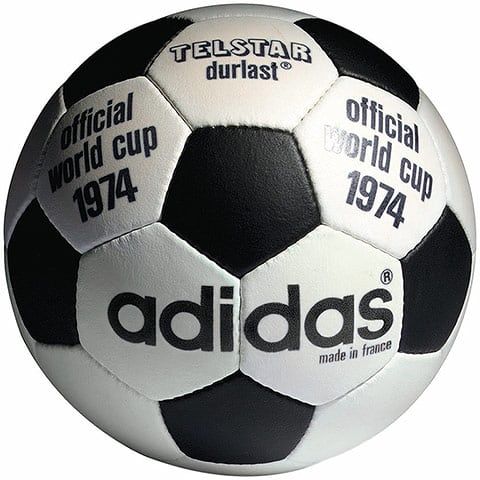 The Telstar Football aka ‘Buckyball’ with the classic 20 hexagonal and 12 pentagonal patches is the single most iconic design of the football. (Image: Pinterest)

While the world of football stayed true to the ‘buckyball’ structure, changes have been made periodically to enable better performance. For instance, in 2014 Adidas introduced the most tested football ever, the Brazuca, at the 2014 World Cup in Brazil. Adidas introduced the most tested football ever, the Brazuca, at the 2014 World Cup in Brazil. (Image: Pinterest)

In 2018 Adidas came full circle and paid homage to the first Telstar of 1970 with the Telstar 18. Though the original Telstar had 32 panels, Telstar 18 has only six textured panels glued together unlike its stitched predecessor. 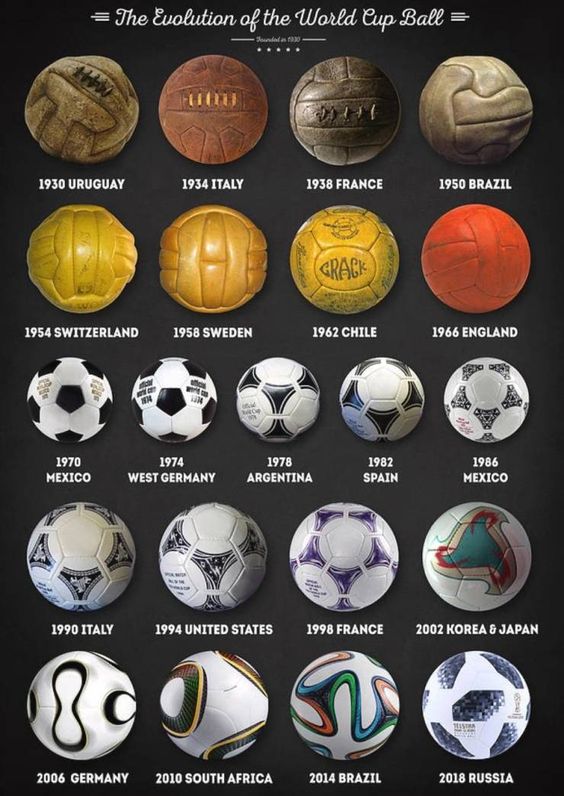 The evolution of footballs over the decades (source: Pinterest).

Most die-hard football fans would agree that football is more than just a sport — it is an emotion experienced by millions all over the world — well summed up by Ronaldinho when he said, “I learned all about life with a ball at my feet”. But before all the leagues, cups, and the global frenzy, there were men and women who worked hard for centuries to give our beloved players the best footballs to play with.

Did you enjoy reading this? For more slices of history, check out other interesting pieces from the Evolution of Everything series.

Tracking the evolution of technology

Driving down the history of Cars

The evolution of News

More give about cricket

So cool?? can you please also one more like this one about the history of badminton.

Nice article i want to know about cricket too??

It is very interesting?⚽.
I request you to give knowledge about cricket also .

It’s really a knowing fact about football. Thanks for the article from this I get to know more interesting facts about football.. Because I am a football lover too….

it is very interesting please give about badminton

Wow! What an amazing evolution . I request for badminton tooo.
Thank u.

Thank you very much Byju’s for this information about football ?. Me being a great football fan. It would be great to say this news to my school football team ☺️. I am a part. So a good information for mee

Want to know more about another sports as well.

Very interesting and informative information about football⚽⚽
Can I get a post for badminton ??
But at the end of the day, I love to read articles I these…..

I really like this information thanks for it byjus

Woah :0
That was a very informative information Byjus . Loved it <3 Glad to see that you all chose Football over cricket because cricket sport is little overrated in my opinion. Football and Basketball at such awesome games too. Looking forward for more amazing information on sports

This article is so amazing

Amazing give one for badminton as well

IAM SO, TO PLAY HOCKEY PLEASE ME ABOUT HOCKEY

Yes football is aexcellent sport created as a tsu-chuand I am really excited with this and I also want information about ?

Hahaha! ??off! History of teachers! The first teacher was Confucius, who was the god of Confucianism!

Very nice I request byju to give about atletics

But what about the results of the friendship day contest???

That is an interesting story. ?⚽⚽

It is very interesting for me. I learned many information. ⚽️⚽️⚽️???

The information was quite nice and surprising but the most horrible part was playing with animal bladders and human heads.

Seriously such a nice article to read about …. Even I am a football player but I did not know about it !

I simply love playing football but I didn’t know there was soooooo much behind this ball.
I mean to say that even if you research about and observe the small things around you, you can unravel a whole new world!!
And you help us to do that by sending such facts on objects that no one ever even bothers to find out about!!
Thaks a to for giving me such a wonderful price of information!!????

Cool!My favourite is the Brazuca Football ⚽?

How many things in balls changed

It is so interesting, but please give information about cricket.
And some experiments

I enjoyed reading this article, it was really interesting!

This is amazing ! I Travelled many years back to the history of football from which we are playing now

wow!I ALWAYS WONDERED HOW THESE FOOTBALL
HAVE BEEN MADE! THANK YOU BYJUS

very interesting….. i request you to give about some art skills or like basketball…. thank u

Article was very interesting. I also want to know about badminton

So coooool✌️??? Could you please tell me about the evolution of basketball? too.Would ❤️to know. Thank you Byjus ?

I wondered that in ancient civilizations they played football with HUMAN HEADS!!!???

Thanks for giving this. Football isu favourite sport.

Wow that ‘s nice happy to see this

This is amazing, Thank you ??

This is very interesting ?

THANKS FOR TELLING ME ABOUT FOOTBALL HISTORY AND

Thank you for this nice information

Kindly keep posting new articles like this and on other topics. It’s a lot fun and interesting to read these.

Thank you so much ???? to Byjus Learning Tree.

We are Uday and Ujjwal Choudhary .we love byjus the learning app the best learning platform
Thanks for such a message

Wow it is very interesting….??

Superb article about evolution of football…
Keep on posting about sports facts.

Whoa!!!! I didn’t knew that football was evolved so many times!!!??

Woaa……I Very Interesting ????I Love Playing Football ? But Can’t Play As It Risky ?…I Cannot O
Play Other Outdoor Games…????…….I want to know about the history of teachers next???

Wow what a revolution

We are missing the byjus fun facts
Please bring it again.

Very excited.And also I request to give about cricket