What Would Happen If Ant-Man Was Real? 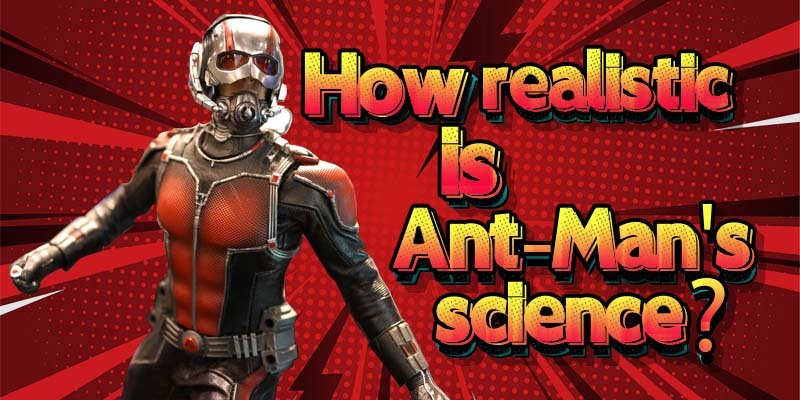 When Ant-Man of the Marvel universe first crawled onto our movie screens in 2015, master thief Scott Lang discovered that a special suit gave him the ability to shrink or enlarge at will.

Don’t let the name fool you, Ant-Man is a formidable superhero with some pretty neat powers. He has the ability to shrink to subatomic size while keeping full-size strength, control ants with his mind, and change the size of objects around him.

The character of Ant-Man is remarkable, but can a real-life Ant-Man be possible? Let’s find out how accurate the science of Ant-Man is.

The “Science” of Ant-Man: How Does He Get His Powers?

In the first movie, Ant-Man gets his ant-like powers thanks to fictitious “Pym particles”. Pym particles can expand and shrink things by manipulating the spaces between atoms, without manipulating mass. 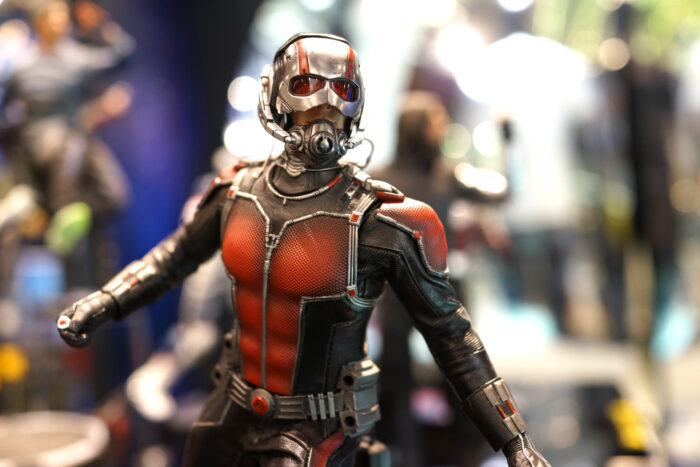 The most obvious error in the science of all this is, well, the laws of physics. We’re made of atoms, and the neighbouring atoms are all touching each other. One method of changing your size would be, well, squeeze the atoms closer together. The problem is the atoms in your body are already touching other atoms. In other words, they are as closely packed as possible. The reason why they can’t just pull super close together is that if they get closer and closer, the electron clouds from neighbouring atoms will overlap. Electrons are all negatively charged, and similarly charged objects repel each other, and when they get closer the repelling forces are really strong.

How strong? Well, let’s just say that if we are to squeeze the atoms close enough to reduce someone’s size, it would exert pressures that would result in creating jelly out of a human being in a blip of a second.

Not so superheroic, is it? 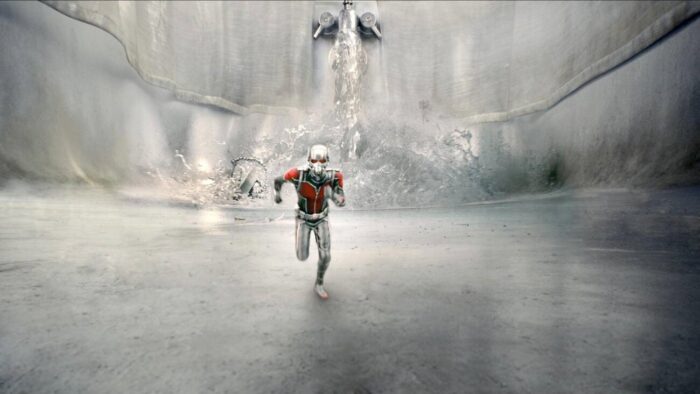 Let’s assume that this fundamental roadblock of physics doesn’t exist. Our Ant-Man can indeed change his size as he deems fit. Now let’s revisit certain Ant-Man moments in that context.

In the first Ant-Man movie, while training Scott Lang to be the next Ant-Man, Hope van Dyne mentions that a 200-pound (90Kg) man, when shrunk to 1/100 of an inch, can act as a bullet. This happens because the energy packed into a human-sized punch is now squeezed into a very tiny volume.

The science here is indeed correct. A very small area is being impacted by a very condensed form of energy, leading to greater damage.

If Ant-Man goes subatomic, he can probably penetrate the body without even tearing the skin and easily rupture fundamental biomolecules, such as DNA, just like high-energy radioactive rays.

Now, consider that Ant-Man, with the help of Pym particles, expands himself into a giant. The energy from his punch now gets distributed over a much larger area. Although the punch is coming from the same 200-pound man, the impact would not be as deadly as a punch from an ant-sized Ant-Man.

Why is that? Because we know that denser materials have a higher strength. A 100 kg iron block that hits something can cause some serious damage, but the same cannot be said if the same 100 kg is in the form of a giant balloon figure. 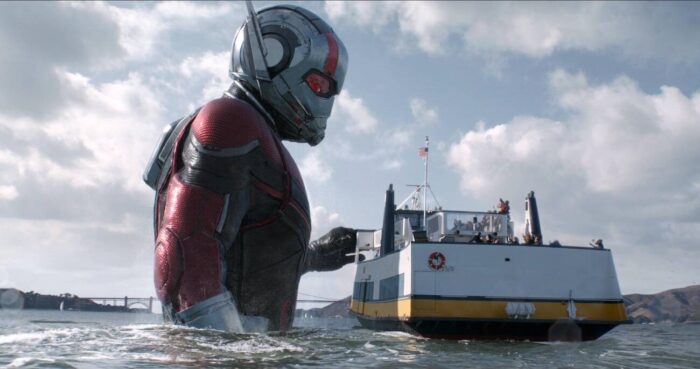 Similarly, as Ant-Man expands into a giant, the density of matter in his body decreases dramatically, thereby reducing his strength. So, if you saw a huge angry Ant-Man charging towards you, don’t worry! He can’t hurl a bus at you or break the wings off an aeroplane.

But we did see Ant-Man flinging half a plane at Iron-Man and destroying entire buildings with his hands. So yeah, the MCU universe is not consistent even with their own fictional science!

Another instance where they completely ignore the “not messing with the mass” law takes place in the sequel film – Ant-Man and the Wasp. Dr Pym shrinks down an entire building that contains his lab into a rollable structure that is then moved around in a van. Let’s assume that the building and van are made of a super-strong material that came out of Dr Pym’s lab, but the roads and the surroundings are made up of normal construction materials, right?

All of us are familiar with the feeling of a slight tremor in the ground when a very heavy vehicle passes by; this is known as traffic-induced vibrations. Now, imagine the same feeling, but for a van carrying a 10-story building that weighs tens of thousands of tons over normal roads. This could easily give rise to local seismic activity.

Also, dragging such highly dense matter in a van where the entire mass is supported by only four tires would crumble every part of the road it touched beneath its weight. In other words, there wouldn’t be any sneaking around and hiding from the FBI. 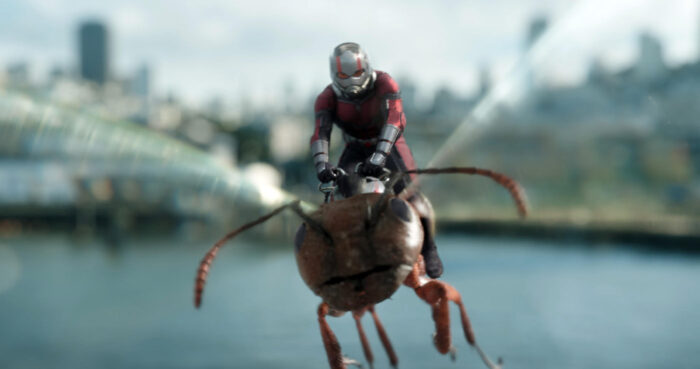 One of the most well-known features of ants is that they are incredibly strong relative to their size. Ants can even carry loads several times their own weight. Ant-Man maintains the strength of a regular person even when he is miniaturised as explained above.

For ants, their strength has a lot to do with their body, particularly their very strong necks. Ants and humans don’t have the same anatomy. Insects use an exoskeleton made of a material called chitin. An exoskeleton is an external skeleton that supports and protects an animal’s body, in contrast to the internal skeleton of, for example, a human.

The body structure is also relevant. Humans have a flexible spine, while ant spines consist of three rigid sections. Mechanical engineers have found that a field ant’s neck joint can withstand up to 5,000 times its own body weight! Could a miniature human neck withstand such extreme forces? Probably not.

Perhaps the human body is likely not compatible with such changes, so it looks like magic remains the best option for ant strength, or as a last resort, maybe spending more time at the gym.

Ant-Man is able to talk to and control ants with his mind using a helmet that releases chemicals used by ants for communication. In the first movie, this is explained by tapping into the olfactory centre of ants’ brains (the part that handles smell). Although it is not possible to telepathically control the sense of smell, the movie is correct in highlighting the importance of scent in ant communication. 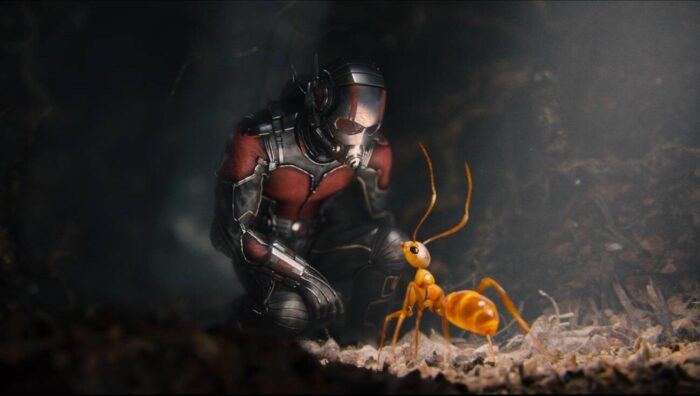 Ants have an extraordinary olfactory system and communicate with each other through chemicals that they effectively “smell” with their antennae. Therefore, while it’s still in the realm of science fiction, it is theoretically possible to engineer devices that produce ant-like smells and therefore communicate with them in some way.

Ant-Man can make ants attack or do specific tasks on command. But in reality, ants do not follow a leader – they don’t even follow their queen. Instead, they collectively accomplish tasks, like building gigantic nests, by sensing their surroundings and making local interactions with other individuals.

The ability to sense the environment and make different decisions are influenced by biological sensors which are ultimately controlled by genetics. Therefore, it’s not really possible for our superhero to command ants to do this or that as he pleases. 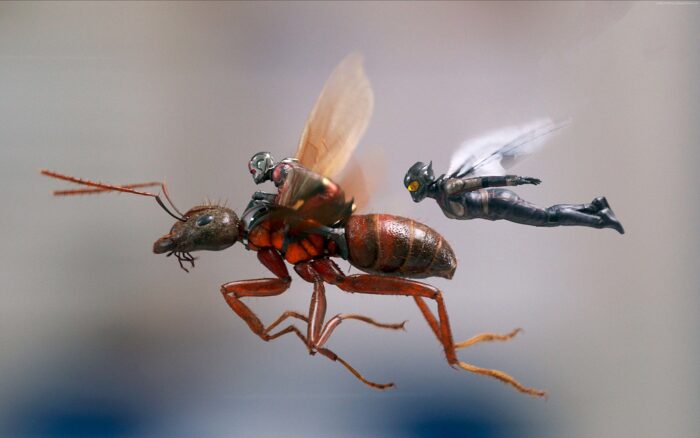 Although it is fun to think about how we might become a pint-sized member of the insect world, like all superheroes, Ant-Man is purely a work of fiction. While we cannot use any science, or anything else for that matter, to turn anyone into a superhero, looking closely at the animals that many superheroes are named after (bats, spiders, ants, wasps), one can often find extraordinary qualities. The real superheroes might not be found in a comic book, but crawling just outside your doorstep.

I would like to know the science behind Spider Man’s web shooters.

My favourite superhero is Iron-Man but I eagerly want to know the science behind the magic spells used by Dr. strange. I know it’s a magical spell, but I want to know if it is possible or not in any way.

My favorite superhero is Iron Man