Tell Me Why #5 – Why Do We Yawn & Are Yawns Really Contagious?

Welcome to BYJU’S ‘Tell Me Why’ where we explain to you the ‘why’ behind anything and everything that’s been on your mind! So go ahead and ask us a question that starts with ‘Tell Me Why’. We’ll pick the most intriguing questions and feature them along with an illustrated answer on The Learning Tree Blog.

To ask your question, fill up the form here:

Today we are answering a very interesting question asked by class 8 student Dashmeet Kaur from Bhilai, Chhattisgarh. She wants to know:

Why Do We Yawn?

Everybody yawns — from unborn babies to the oldest great-grandparent. Animals do it, too. But why, exactly, do people and animals yawn?

Well, there are plenty of mysteries about the human body, and yawning is no exception. No one knows for sure but there are many theories about why people yawn.

We typically think of yawning as an indication that we’re tired or bored, but some people report yawning more frequently when exercising or while singing. So, if it’s not just a sign that we’re sleepy or bored, why exactly do we yawn?

So how much of yawning is mystery and how much can science actually tell us about yawns?

The theories of yawning 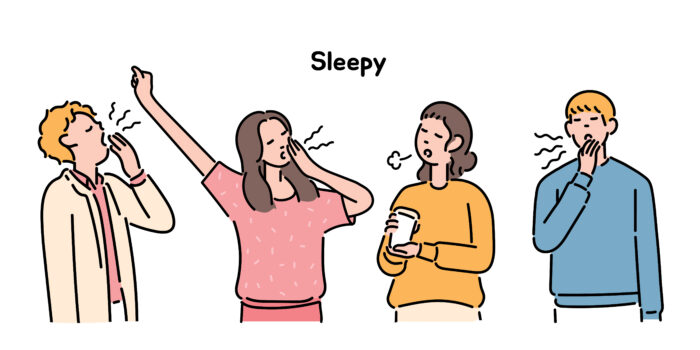 Yawning is a reflex characterized by a single deep inhalation (with the mouth open) and stretching of muscles of the jaw and trunk. It occurs in many animals, including humans, and involves interactions between the unconscious brain and the body, though the mechanism remains unclear.

There are many theories as to why people yawn. For many years, it was thought that yawns served to bring in more air because low oxygen levels were sensed in the lungs.

We now know, however, that the lungs do not necessarily sense oxygen levels. Moreover, foetuses yawn in-utero even though their lungs aren’t yet ventilated. In addition, different regions of the brain control yawning and breathing.

Another reason you may yawn is because the body wants to wake itself up. The motion helps stretch the lungs and their tissues, and it allows the body to flex its muscles and joints. It may also force blood toward your face and brain to increase alertness.

Other people believe that yawning is a protective reflex to redistribute the oil-like substance called surfactant (say: sur-FAK-tint) that helps keep lungs lubricated inside and keeps them from collapsing.

Why do I yawn even if I am not tired? 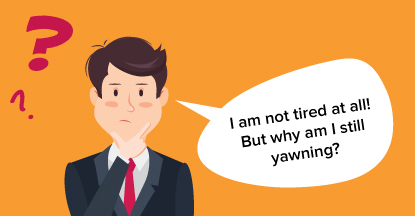 That’s a great question! And it’s the same question that made scientists debunk the theory about yawning when we are tired. The most scientifically backed theory about why we yawn is brain temperature regulation. A 2014 study published in the journal Physiology & Behavior looked at the yawning habits of 120 people and found that yawning occurred less during the winter. If the brain’s temperature gets too far outside of the norm, inhaling air can help cool it down.

By now, you must have understood that there is no one answer to this seemingly simple question about why we yawn. Scientists are still breaking their heads over it. But there is one part about yawning that has got everyone puzzled for years: It seems to be contagious!

If you yawn in class, you’ll probably notice a few other people will start yawning, too. Even thinking about yawning can get you yawning. How many times have you yawned while reading this article? We hope not many!

Yawning is definitely contagious. Even videos of people doing it can trigger a yawning session. Try watching the video below and see if you end up yawning. Tell us in the comment section if you did catch a yawn or not.

Similar to the mystery surrounding why we yawn, experts also aren’t really sure why yawns are so contagious.

In the context of the brain-cooling theory of yawning, perhaps yawning evolved to become contagious as a means to increase the cognitive performance and vigilance of people within a group. While this may sound silly in today’s world, it could have been an important collective behaviour for our cave-dwelling ancestors who needed to stay alert as a group in order to survive.

While it’s not clear what yawning truly communicates, some experts believe that the contagious nature may also be a way of showing empathy and matching the emotional states between people. In fact, a recent study shows that we’re more likely to experience contagious yawning with our closest acquaintances than we are with strangers.

So, the next time you yawn, think about whether you’re tired, bored or neither, and also if you’re yawning on your own or you’re yawning because it’s just on your mind!

Also tell us in the comment section which of these theories of yawning you find most acceptable.

Also read, Why do we laugh when tickled.

I feel yawn when i am tired

I feel tired? in daily life works so sometimes i yawn ?

That’s excellent . The explanation was too good

I loved the concepts in byjus app . For its visualisation , it has become more interesting and also for such good and experienced teachers … Thankyou byjus…

Thank you for the information. It was really nice and interesting.

Yawning is caused by insufficient oxygen in the body.

I accept the brain cooling theory…
I really enjoyed please make this type of more videos because when we watch it we feel more of exploring it and learn it
Thank you ..

Yes,I am also yawn sometimes when I am studying

Hello,
Team byjus,
I personally think that we yawn when we are getting tired or bored but the most important thing to consider very particularly when we are relaxed…we yawn.
Relaxation is mainly connected with yawning
Thank you.

Why do we snore during asleep

I loved the video?

Why are some people left handed ?

One is that when we are bored or tired ,we just don’t breathe as deeply as we usually yawn. As this theory goes, our bodies take in less oxygen because our breathing has slowed. Therefore yawning helps us bring more oxygen into the blood and move more carbon dioxide out of the blood.

#TellMeWhy
We have tears in our eyes while chopping Onions

OMG, this article is like reading my mind, I was mind blown when I read this: How many times have you yawned while reading this article? Well, yeah true I did yawn like 7 time or so

As you said
“Seeing someone else yawn – You are exposed to the same temperature as others”
But I also yawn when I see someone yawning virtually or on TV..
Why is that??????

I literally yawned ? 10 to 15 times while watching the video..
Anyways..
Great effort from Byjus, I understood why I yawn. Thank you byjus for one more awesome video. ?

Good afternoon
I Also yawn at school, at tution because I had get up early morning for at 6 :30 and I have to do many work in entire day ( Going to school , going to tution , doing homework ,going for sports) and at sleeping at 10 ,11

Why warm water is coming outside from bore well In winter & cold water in summer ?

Byju’s way of learning very well
Thank you so much.

why do we close our eyes while sneezing?

I wanna ask a question why do we shiver when we feel cold ?????
And I absolutely love the Byju’s app and I’m now a premium member and my mentor is just amazing love Byju’s

Tell me what happened if two cyclone collide ?

It’s true, even I catched a yawn while watching this video. It is a very curious thing to be thought.

Yes i also yawn when i see anyone else yawning

Because our brain sences us that there is low oxygen in our body.

Yawns are not contagious.

Yes I had a yawn

I think 1 persent of world use their both hands

I think it’s the anaerobic respiration if our body wants to take rest.

Why do we communicate each other

Why do we have such curiosity to know about anything new?

yawning helps us bring more oxygen into the blood and move more carbon dioxide out of the blood.

I sometimes while saying yawn in few movements we will yawn automatically .Thankyou

Why do we think ?

My mentor Ekshuthan (from karnataka branch i think so)has been my pillar of strength from day one. It is her constant guidance and encouraging words that have helped me become a lifelong learner. A big thanks to her and BYJU’S – The Learning App.

This is interesting fact and this is also a knowledgeable fact .please make more video on fun fact.

Interesting topic
Good ????
In every point of view ur doing the best Byju’s ❤️

It was very helpful. I have a question, which makes me wonder a lot, that is why do we have hiccups? And why are we preferred to drink water to stop the hiccups?

We yawn because when we tired and board we don’t breath deeply and by yawning we take more oxygen and we can remove carbon dioxide .