A World Behind the Stage Audio Engineer, Alamsha Wahab talks about the dwindling art of sound editing and the world behind the glamorous platform of musicians

Being the youngest in the sound team never stopped Alamsha Wahab from giving his best at the job. With the challenges in the field of Audio Engineering, his thirst for the perfect chord to his life lead him to Bangalore. With his groovy headphones on his head 24×7, on a regular day, you will see him taking voice over auditions and recordings of different people in his cabin, taking breaks only to crack a joke, blast some tunes and grab a snack.

The smaller nuances and challenges of his life rarely surface on his face which always carries a smile. Hailing from the vibrant capital of Andaman and Nicobar Islands, Port Blair, Alamsha spent a majority of his life surrounded by a close knit and jovial community. As a strapping teenager, he earned a name for himself as a musician and singer and lived upto the titles till his departure from the city. A bank job lead his family around the country from Durgapur to Chennai after which a chance conversation with his professor lead Alamsha to apply for his role as Audio Engineer at BYJU’S. 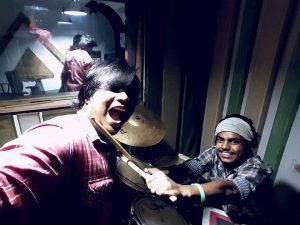 Alamsha’s love for music emerged from a lonesome guitar that always stood in the corner of his brother’s room. Shahansha, His elder brother, never found the time to practice, so Alamsha took it upon himself to make full use of the instrument. When in his 9th grade, he would often spend hours staring at the guitar, wondering of how famous musicians created magic from it, would clean it secretly and put it back in its place. He picked it up many years later to commence learning on his own.

Alamsha’s experience range widened with more musicians trickling in from different parts of city who he helped with their recordings. This was when the realisation struck him that every second family in India has a musician or a singer, the love for music resounded in every human soul; however the knowledge of sound and music engineering, or the fact that a field like this supported the stage, did not exist. The thought stayed etched in his mind till he passed his 12th, and when asked of what field he wanted to take up, Alamsha stated his wish of taking up sound engineering. Defying his parents and family, he faced their wrath for almost a year while he completed his diploma course in AAT Media College in Chennai. Their confidence in his dreams grew however after he progressed in life, getting more and more offers for compositions and sound engineering.

Audio Engineering- A Challenge, an Artform and a Passion

From his experiences, and those of his batchmates and colleagues, Alamsha realised that the journey of an audio engineer is riddled with challenges in terms of the exposure they receive, professional growth and financially. With the basic talents of a good ear for music and technical sense, the burden is reduced considerably. There is a thin line between a sound engineer and a creative sound engineer and having a nack is the trick to pushing yourself higher up the ladder. According to Alamsha, creativity comes in picking up a vocal line, reversing it and putting it back in track after delaying it a little bit. Understanding the artist’s style and the audience taste is also important when mixing and recording tracks.

An ardent follower of Guns and Roses, especially lead guitarist Slash, Alamsha’s love interests kept flitting between one band to the next, depending on the phase in his life and his understanding of the music. He believes that is what makes a musician, the ability to glide between different styles of music, making their taste more versatile. His interests also pan towards bikes and traveling, often both combined together, his lifelong dream being to scale the mountains of Ladakh on his Hyosang 650.

As he recalls his first live performance, he states that it was probably his worst memory ever. Being a manageable singer, he had never thought of venturing on stage to sing, specially when playing an instrument, but during a college fest, he was handed a guitar and forced to sing before a live audience. He had never felt fear like that before or ever since, but he knew that experience left him a stronger and a more humble person. His music experiences were not limited to that incident only, Alamsha had the chance of recording a song for the renowned music director Johan Shevanesh (Music director of Tamil film Metro) as an intern. His work at BYJU’S has enabled him to access the best of technologies and equipments- a playpen for any sound engineer, and collaborations and jam sessions with other musicians in the team help provide the base for the music that accompanies all the videos. Music- The universal language and the journey ahead

To an outsider, Alamsha would appear to be a regular college student, but after only a diploma course in sound engineering, very few manage to settle with the career of their dreams. Alamsha hit that benchmark at a young age and dedicates his free time to music and recording as well. He believes the studio is an amazing platform to meet new artists, and learn about their lives and what inspires their music. Creating music from scratch, laughing over the broken notes and tunes and come together to form and entire piece and the hundreds of conversations- behind the closed doors of the sound room lies an entire world which holds the fort for the whole of the sound industry.

For himself, Alamsha has simple dreams. In ten years time, he sees himself riding his bike to a distant city somewhere in California where he has the luxury of owning his own studio, where he can experiment with mixing, recording and mastering to his heart’s content. A layman would call it nerd-level MAXIMUM, but for him it is an achievable dream after years of research and study.

“ Whatever I do, I try to better myself and make it perfect. The years of strutting from one studio to another in search of experience and learning has helped me a lot. I want to make the best use of these experiences and use them to give the best I have to offer. It may be a challenge now, but the future is bright for all of us. I take it all in with a smile and lots of food to go with it.”– Alamsha Wahab

About the Author : Ankita Dutta is a STORYWEAVER at BYJU’S. Avid reader and writer by day, a classical singer by night, Harry Potter nerd, a film aficionado, and the classroom joker in her yesteryear. Ankita believes that words can influence to a point where they change personalities and ideologies. Wish to contact her about intriguing debates, writing trends and stories? Drop in a mail to [email protected]

All the best ALAMSHA Allah bless u , all your wish comes true in life,best of luck