This is the real story of a study that took place in 1996. Researchers invited 56 volunteers to test the effectiveness of a new painkiller cream called ‘Trivaricaine’. For each volunteer, one index finger was covered with the new painkiller while the other was left bare. Then, researchers squeezed each finger hard with clamps. The volunteers reported that the finger that was covered in the painkiller hurt less than the other one.

This should mean that Trivaricaine was a successful painkiller, right? But here’s the catch – Trivaricaine wasn’t a real painkiller at all! It was just a fake concoction with absolutely no pain-reducing properties whatsoever. But what made the volunteers so sure that this dummy medicine actually worked?

The answer lies in something called the placebo effect.

The placebo effect is a mysterious and unexplained phenomenon where therapies, treatments, and medicines that aren’t actually supposed to work and are often fake, miraculously make people feel better.

Doctors have used the term placebo since the 1700s when they realised the power of fake drugs to improve patients’ symptoms. These were used when proper medicines were not easily available or when the doctors suspected that the patient’s illness was just imagined in their head.

Placebos had to look convincing and be close to the original treatment so the most common form of the placebo was the ‘sugar pill’. It was basically a pill that contained nothing but sugar. Thanks to the placebo effect, it would convince patients that it is actually working, so much so, that it would create physiological changes in them and make them healthy!

Once the placebo became common as a form of treatment, doctors soon realised that the power of the placebo effect could be used in another field – clinical trials.

The Placebo Effect in Clinical Trials

Before a drug is deemed to be fit for human consumption, scientists have to make sure that it actually works and doesn’t have any dangerous side effects. This is done through a process of clinical trials. These trials or tests are conducted in a controlled setting so researchers can accurately measure how well the drug is working or if the new drug is working at all.

Then, if the new drug’s effects were significantly greater compared to the placebo, the drug would be proven effective. Nowadays, this method is not as frequently used because it is considered unethical to give someone suffering from a serious condition a sugar pill just for the sake of testing and research. If it’s possible to compare a new medicine to an older version or another existing drug, that’s preferred to giving the patients a placebo i.e. no treatment at all, especially when dealing with serious ailments. In these cases, placebos are used as a ‘control group’ so that the effects of the new drug can be precisely measured.

How does the placebo effect work?

While there are quite a few theories behind how this mysterious phenomenon works, the short answer to the question is that we simply don’t know. Thanks to the placebo effect, patients have experienced relief from a range of ailments, including heart problems, asthma and severe pain, although all they received was a fake, dummy treatment. Researchers are still trying to understand how this works.

Some experts believe that the placebo effect is just confused with other factors. Patients might falsely report that they are feeling better to please the doctor or misread how they are actually feeling. On the other hand, researchers have found that if a patient believes that the fake treatment is real, their expectations of recovery trigger actual, real, physiological factors that improve their symptoms.

Remember when you were younger and your mother would “kiss the pain away” when you would stub your finger? Of course, the kiss by itself has no healing property but the child’s belief in the power of the mother’s kiss acts as an effective placebo.

Placebos seem to be capable of causing a significant change in blood pressure, heart rate, and the release of pain-reducing hormones like endorphins. Remember the 1996 study where volunteers were subjected to pain? Perhaps the placebo’s ability to increase endorphins played a factor in the result of the experiment.

All said and done, the fact remains that while we know that the placebo effect exists and can measure its effects clearly, we still have no idea how it actually works. And if that’s not bad enough, there’s more. Have you heard of the ‘Nocebo effect’? We’re not making it up! It’s just as real and mysterious as the placebo effect!

What is The Nocebo Effect?

The Nocebo effect is, in a sense, the opposite of the placebo effect. It occurs when a patient is convinced that the medicine he is receiving is ineffective, even when it is actually effective. This in turn causes the medicine to not work or have a negative effect!

For instance, if a patient is convinced that a drug will produce some side effects, they can suffer from the side effects even if the ‘medicine’ was actually just a sugar pill. Aptly, the word nocebo means “I shall harm” in Latin, emphasising its opposite nature when compared to placebo. 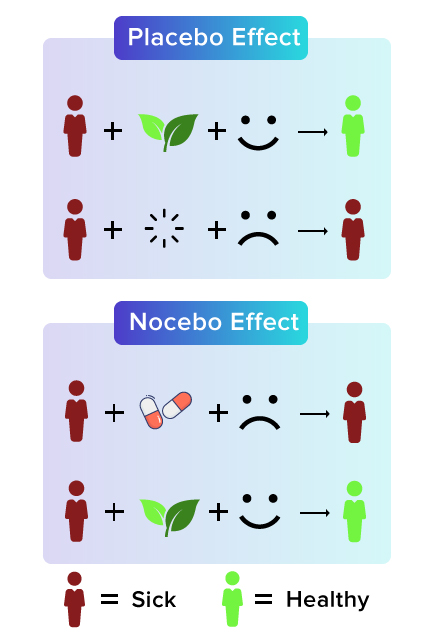 The placebo effect and its evil twin, the nocebo effect, are examples from the boundaries of science that are still not fully understood by experts. They go on to show that despite everything we know about the human body, there are some strange and unexplained mysteries that are yet to be unravelled. While we try to solve all the mysteries in the wonderful world around us, we often forget that some of the biggest mysteries are hidden right behind our eyes!

Can you think of some other unsolved mysteries in the world around us? Share your thoughts with us in the comments section below.

I want some information about burmuda triangle please!!

Oh so cool! I always feel better when I cuddle up in mother’s lap, and when a tasty food is given to me and I think its distasteful it really becomes that! Maybe I know a theory… I have heard “When you think of a thing very hard, one time the brain cannot stand the thought anymore and it materalizes”. Maybe this is the cause of that placebo and nocebo effect!

Such a nice post! I too wrote a post about Placebo Effect on my blog a few months back. 🙂

Thank you Byju’s 🙏🙏
Yes, please post something about bermuda triangle.

What about the mysterious “Barmuda triangle (Vaikunth dham –Sanskrit)??? 🤔🤔🤔🤔🤔🤔🤔🤔