A Quadruple take on African Giraffes!

This is not a tall story, but actual, interesting news!

You have heard about giraffes and how they are the happy residents of South Africa. They are the tallest living terrestrial animals with extremely long necks and long legs. They have long tongues too (around 20 inches on average) that help them pull and chew leaves all day, every day!

If you think that’s all about giraffes and their species, hold on! Scientists recently found four new distant giraffe species roaming the continent. If you think these giraffes are part of some list of interesting hybrid animals, you are wrong! They are unique species!

Until now, the consensus has been that there is just one giraffe species in the world with nine subspecies. But in 2016, the collaborative research of Giraffe Conservation Foundation (GCF), Senckenberg Biodiversity and Climate Research Centre suggested otherwise by hinting at four possible other species of giraffe.

What makes a species?

A species is basically a population or a group of populations with similar characteristics where they can interbreed to produce fertile offspring. In 1735, Carl Linnaeus introduced the modern taxonomy to group species into a genus, families and so on. This helped plants and animals get their scientific recognition. Taxonomy also kept things pretty straightforward – different species are simply different animals.

But little did Linnaeus know what was going to happen 100 years later. Charles Darwin introduced the theory of evolution and with that identifying species under geographical variation became challenging. Species with very different traits got further divided into subgroups. They were considered subspecies of that species. It is through this method scientists also divided the African giraffes into various species and subspecies.

Which are these new giraffe species?

In the new study, the research team examined the genomic evidence taken from over 1000 giraffes (including the previously recognised subspecies) to distinguish these four species. They have classified these new long-necked herbivore species as: 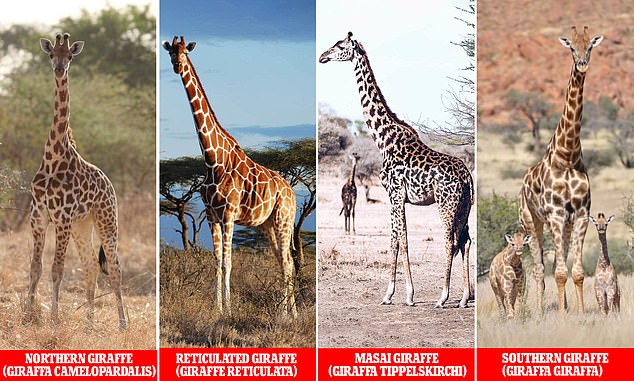 Efforts to map the genome of the African giraffe helped scientists discover four new species of giraffe that have been roaming in the continent | Source: Daily Mail

With giraffes looking so similar, surely you might be wondering how the research team identified these four distinct species.

A few years ago, the Namibian-based Giraffe Conservation Foundation approached Dr Axel Janke about developing ways to distinguish subspecies of giraffes. The foundation wanted to understand how the animals might be affected if different subspecies were mixed together when they were moved into protected areas. Dr Janke, who is a geneticist at the Senckenberg Biodiversity and Climate Research Centre and Goethe University in Germany, started off his research right from the genetic code!  He examined the mitochondrial DNA of these giraffes that live throughout sub-Saharan Africa and look like siblings.

You all know how DNA carries all the information about how a living thing will look and function. It is the basic building block of our genes and is passed on from our parents.

But mitochondrial DNA is inherited only from the mother and not both parents, which is the case with nuclear DNA. On studying the nuclear DNA, the findings from his research baffled him! “We looked at multiple nuclear genes and found that there are not only one, but at least four genetically highly distinct groups of giraffes,” confirmed Dr Axel Janke. “We were extremely surprised because the morphological and coat pattern differences between giraffes are limited. However, to put our results into perspective, the genetic differences between the distinct giraffe species are similar to those between polar and brown bears.”

How could such a tall creature be hidden in plain sight?

Part of this is because scientifically, “giraffes have been a neglected species despite their size,” states Dr Janke. A global focus on endangered and heavy poaching of elephants, lions, and other animals has also contributed to the giraffe’s obscurity. “We estimate that less than 6,000 northern giraffes are remaining in the wild. Their numbers have declined by more than 90% in the last 35 years. As a species, they are one of the most threatened large mammals in the world,” adds Dr Janke.

“It is a miraculous thing,” says Dr Julian Fennessy, director of the Giraffe Conservation Foundation. “The finding of these new species and their genome analysis has great significance for giraffe conservation.”

Hopefully, this new study will put a spotlight on their conservation and save this icon of Africa.

What do you think about this interesting finding about African giraffes? Tell us in the comments below. In terms of biodiversity even India ranks high on the list. Did you know that the biodiversity of Western Ghats is so high that it is considered one among 36 biodiverse hotspots in the world.

Just like the giraffes there is yet another animal that could capture anyone’s attention due to it’s uniqueness and that is the camel. Check out some of these interesting facts about camels.

It is very amazing and intresting.

Thankyou byjus for sending me this information.It was amazing.

It is very interesting
Good information
I love it
Thank you

It is Amazing and interesting it help me learn new things

It’s amazing to see different types of giraffe and their stories????

This was an Amazing news about African giraffes

It’s a very excellent topic to learn from
LKG we are learning but this much is there behind giraffes .
I think this is a excellent topic and useful information about giraffe ? thank you byjus

Interesting finding is heights and species of ? giraffe..

#proud to be byjuite…
Thanks Byjus

Something interesting information i got it.

This help full for students because we know extra knowledge about geography or wildlife and know about the new things. Thank you byju’s. ???????

Thank you so much to the @byjus_team providing us these interesting facts.

I learnt something interesting and new. Thankyou

I learn something interesting and new

Thanks byjus for telling interesting facts of giraffe

It was so amazing to learn about some thing new

This is amazing. thankyou for this information

Interesting And Knowledgeable! Fun facts for all to know about!

Pretty interesting! I wonder the height of the giraffe could be greater than a building. ???

Wow, for telling me interesting facts about GIRAFFES thankyou.

I know this but I got a proper type of revision

it was great, I learnt about different types of giraffe.

Please notify me every time when a new contest come .
Thank you.

It’s a amazing to see different types of giraffe and their stories.

This is an amazing news