DIY Corner – Make your own projector at home!

The real joy of watching movies in a theatre has a lot to do with the big screen. These big screens enable the movie makers to not only leave long-lasting impressions on their viewers but also thrill them with larger-than-life visuals!

While mobile phones do just fine as screens to our favorite shows and movies, they are nowhere close to the magic of big screens. But what if we told you that you can have a big screen like experience at your own home? What if we told you that making a projector for your mobile screens is really not all that difficult? Excited? Let’s take a closer look at the technology of projectors and how you too can make one for yourself!

Projection is an age-old technology, the first-ever mention of it came from Plato, the Greek philosopher (429–347 BCE). It was when he spoke about his idea of the “allegory of the cave” in which he compared everyday experiences to those of a group of prisoners in a cave watching shadows projected on the wall from objects passing in front of a fire. Thanks to Plato, people understood the idea of projection. The very simple concept of shadows is the basic technology behind any type/form of projection. Just like shadows, projection also needs a light source. When you put an image in front of the light source, a shadowy image of the object appears onto the wall(screen) in front of you. 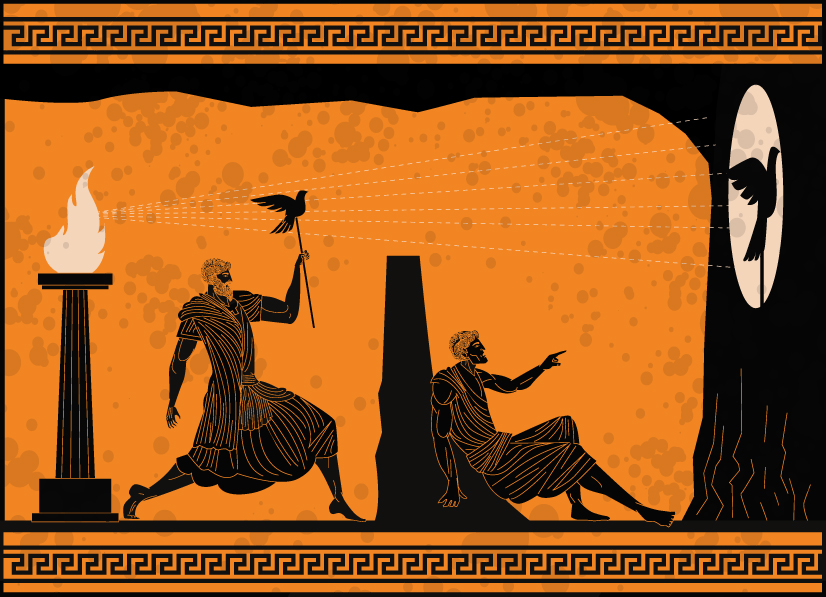 For example, if you watch the behind the scenes footage of many movies, you’ll notice that the actors face the 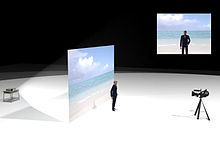 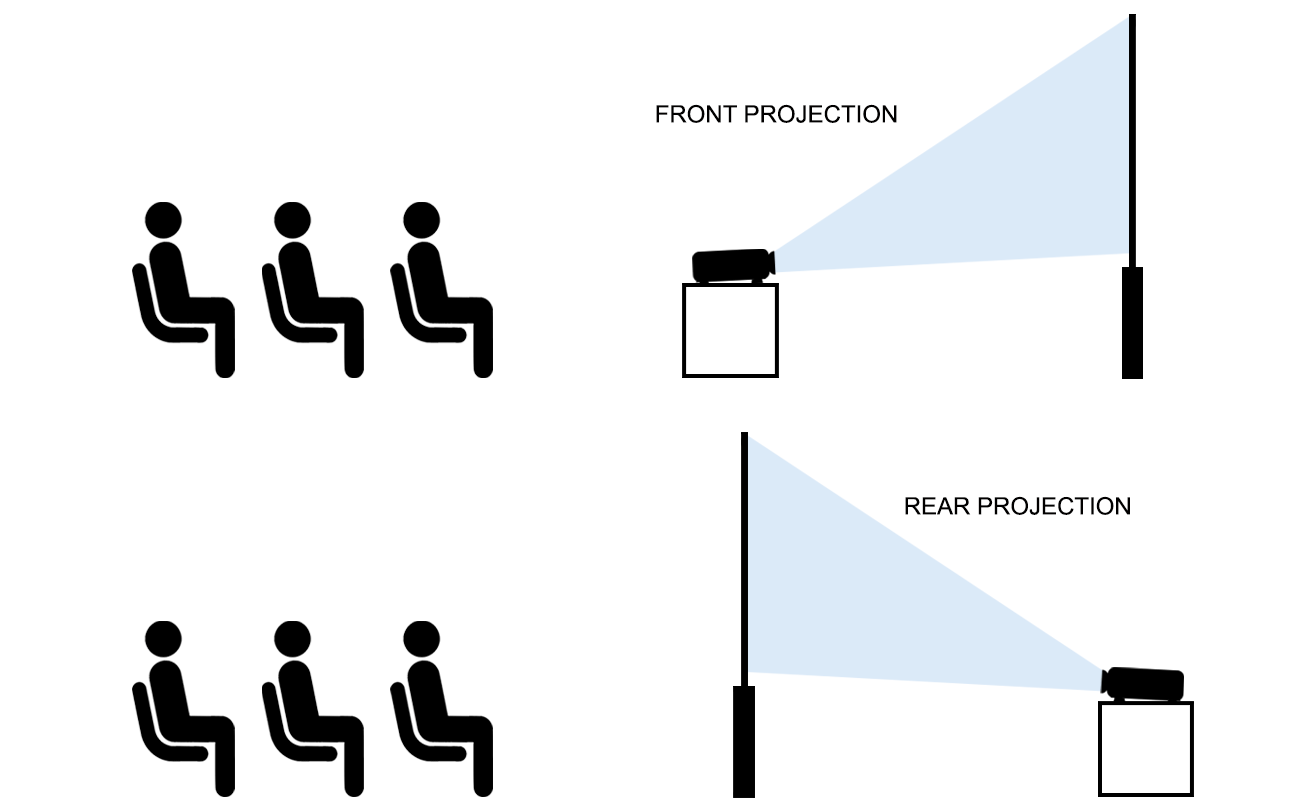 And now on to the most exciting part, here’s how you can build a projector for yourself and make your room into a mini-theatre! 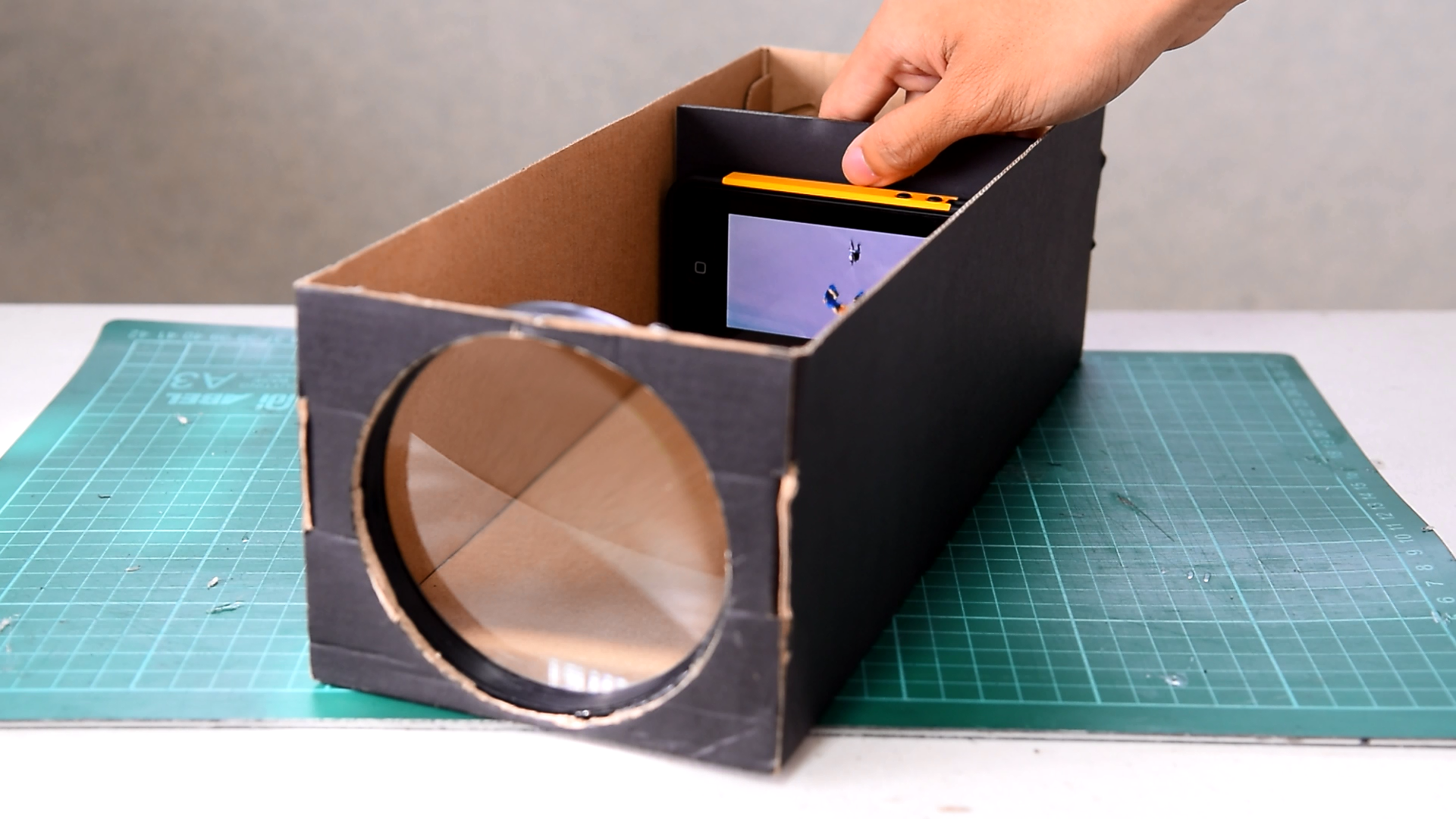 1. Take the magnifying glass and remove it from its holder. Place this glass at the centre of one of the sides of the shoe box (as seen in the picture) and using the marker to draw around the glass, on the shoe box. 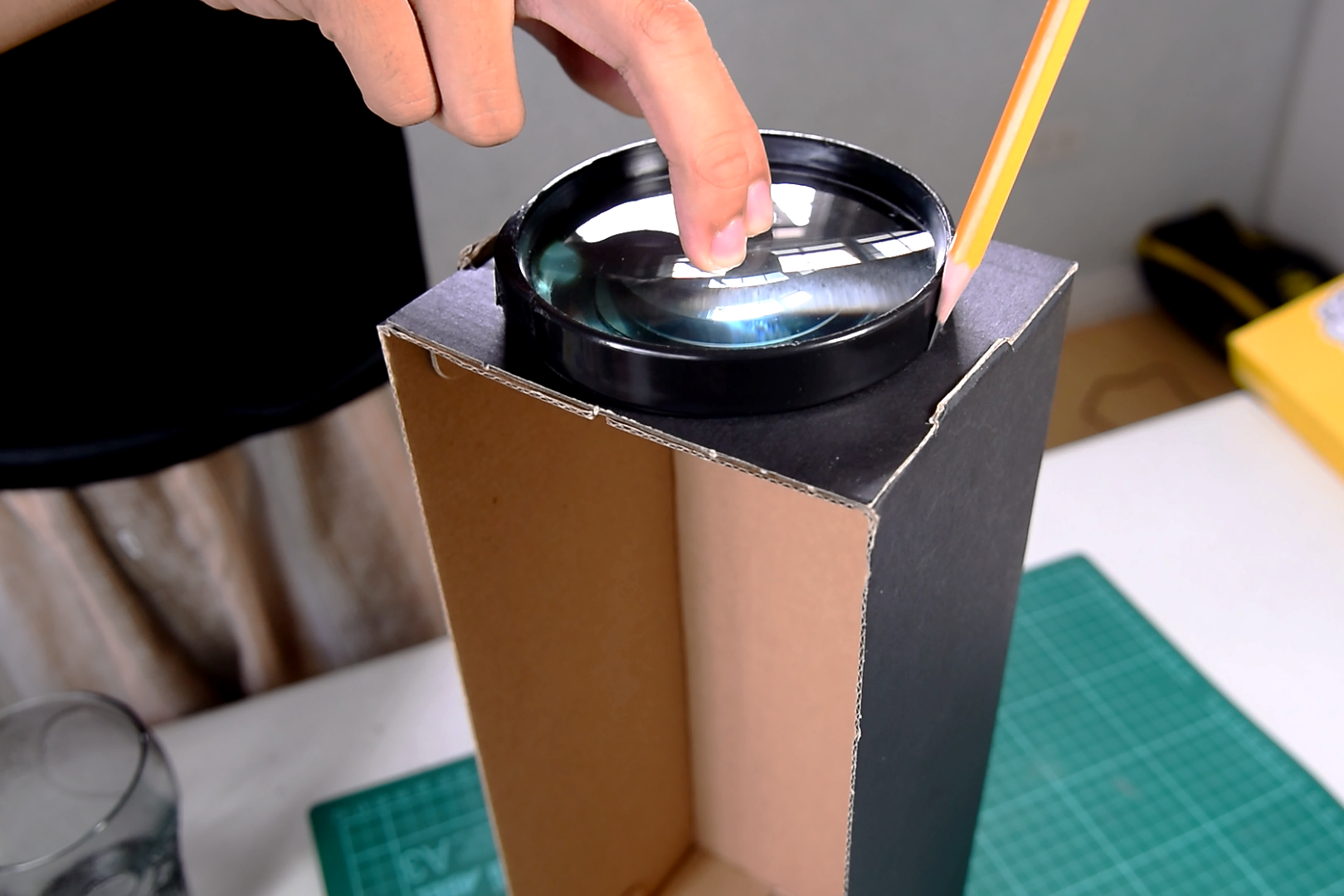 2. Keep the magnifying glass aside. Now using the cutter, cleanly cut out the portion marked in step one. You can take the help of a protractor for the same, although going hands-free is also an option. Now you have a cavity on one of the sides of the shoe box, where the magnifying glass fits perfectly. 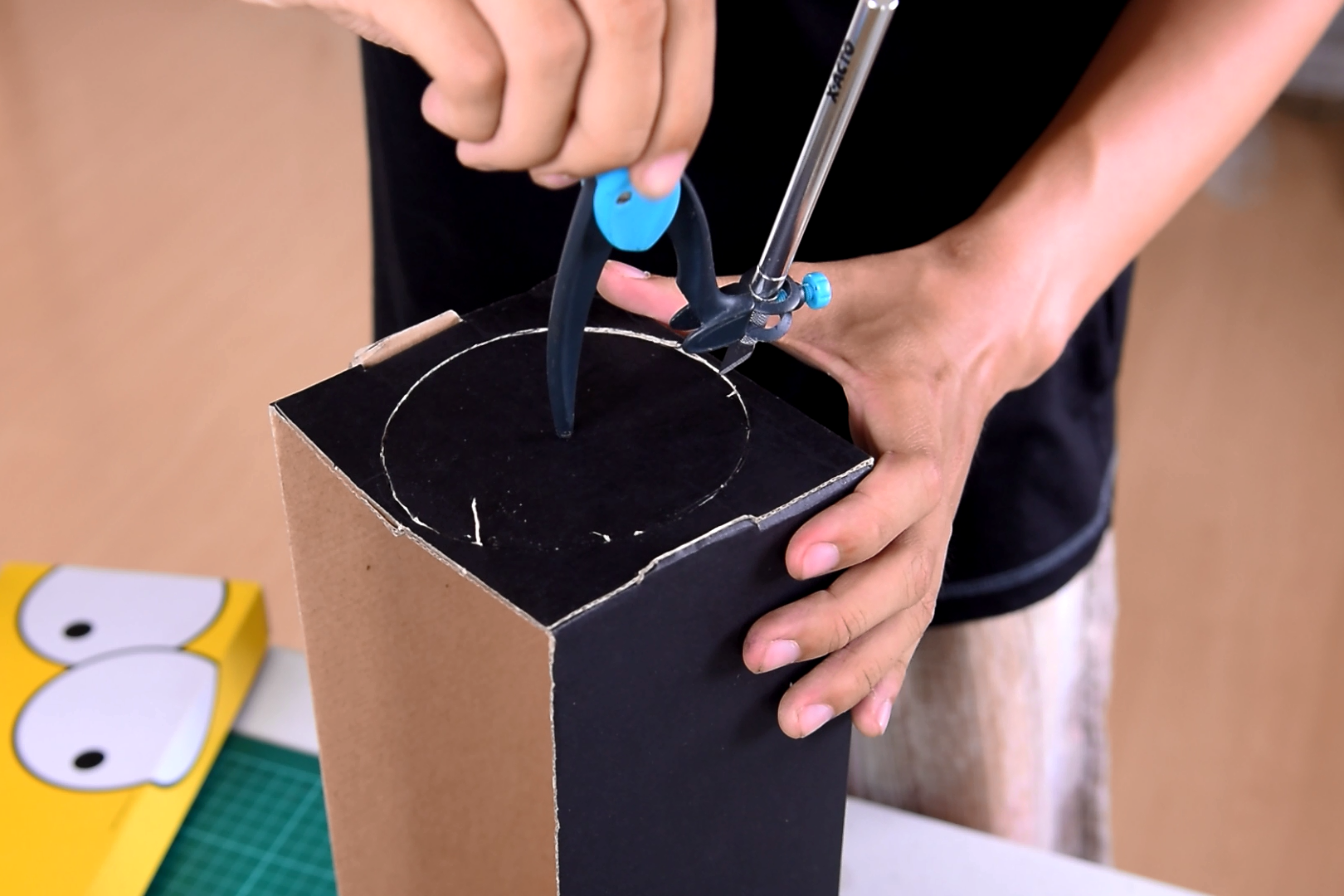 3. If your magnifying glass is slightly bigger than your shoe box’s height, then you’ll need to make a semi-circular cavity in the lid as well to accommodate the lens 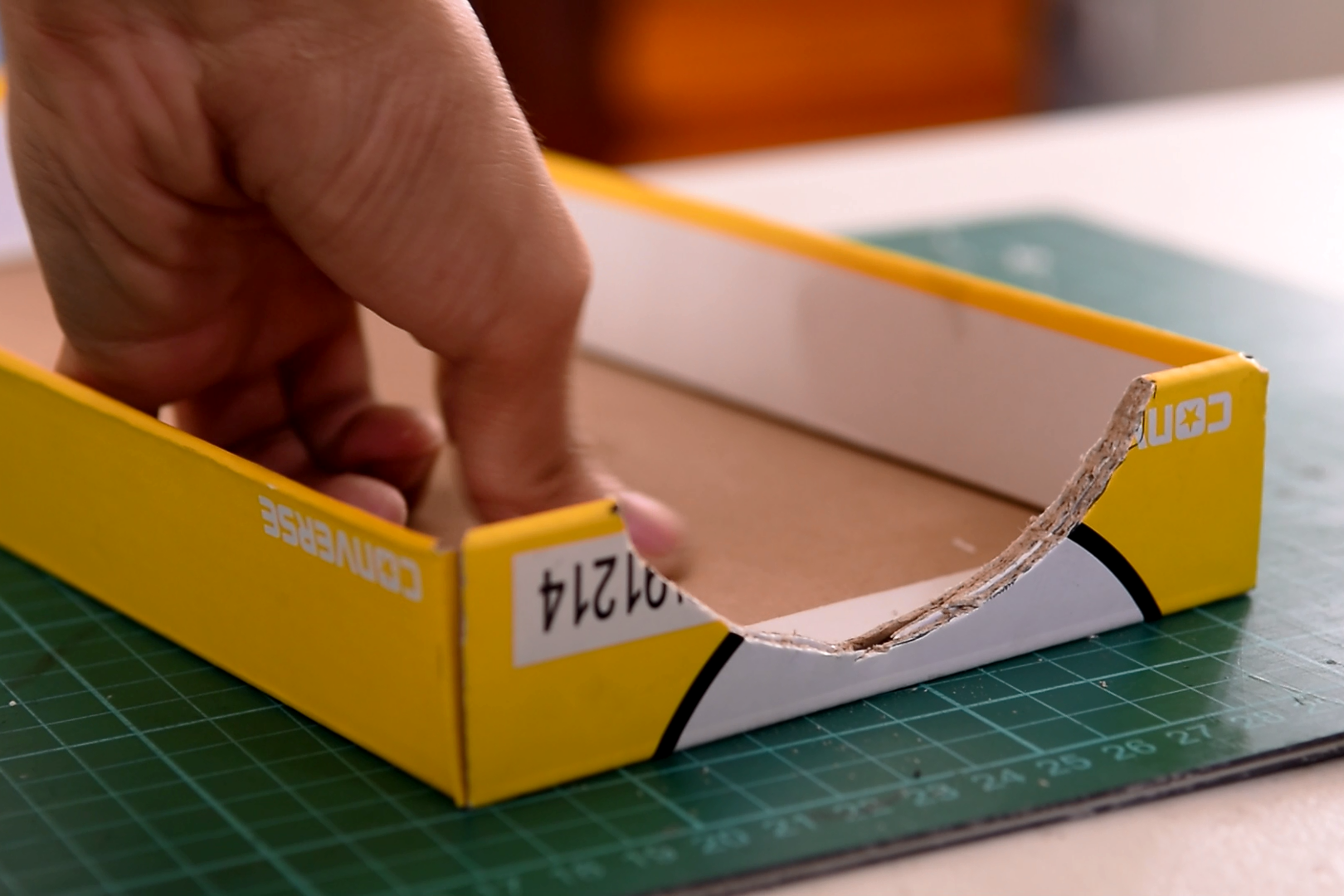 4. Now take the magnifying glass and paste it in this cavity. You can do this by either using glue or duct tape or both! 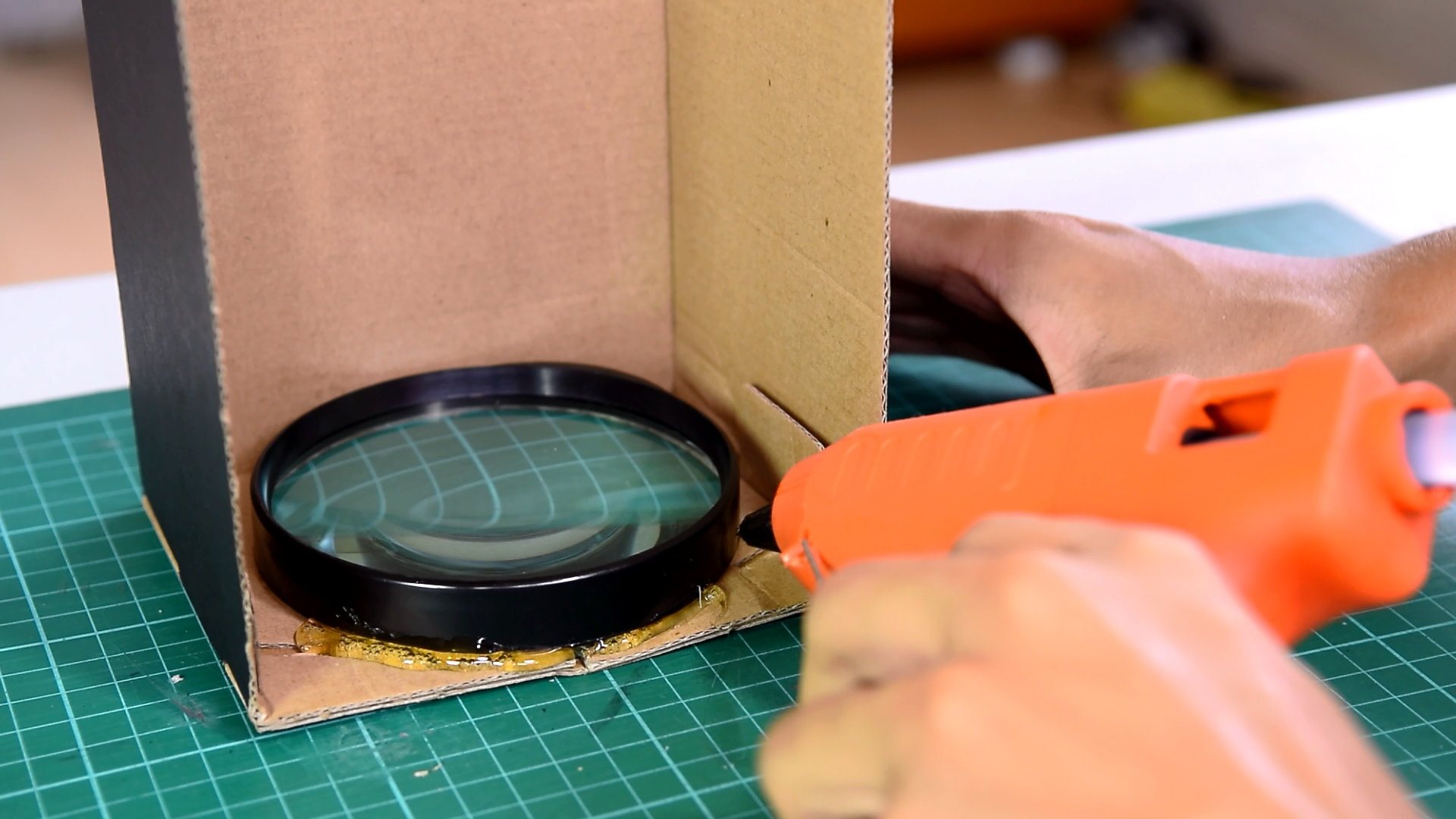 5. If you want to paint your projector, now is the time to do it. Colour the outside surface of the box as you want to, you can either paint it all black or white or even give it a colorful design pattern. Paint the box however you want to and leave it aside for the paint to dry out.

6. Now let’s make a stand for the mobile phone. Measure the space inside the shoe box, to understand the width and length that the sheet needs to be cut into. Now according to this size cut two equal pieces of cardboard. Usually, the measurement is around 17 cm × 10 cm. *Tip: You can use the cardboard sheets from packages of the online deliveries or even the package that comes with pizzas or another shoe box! 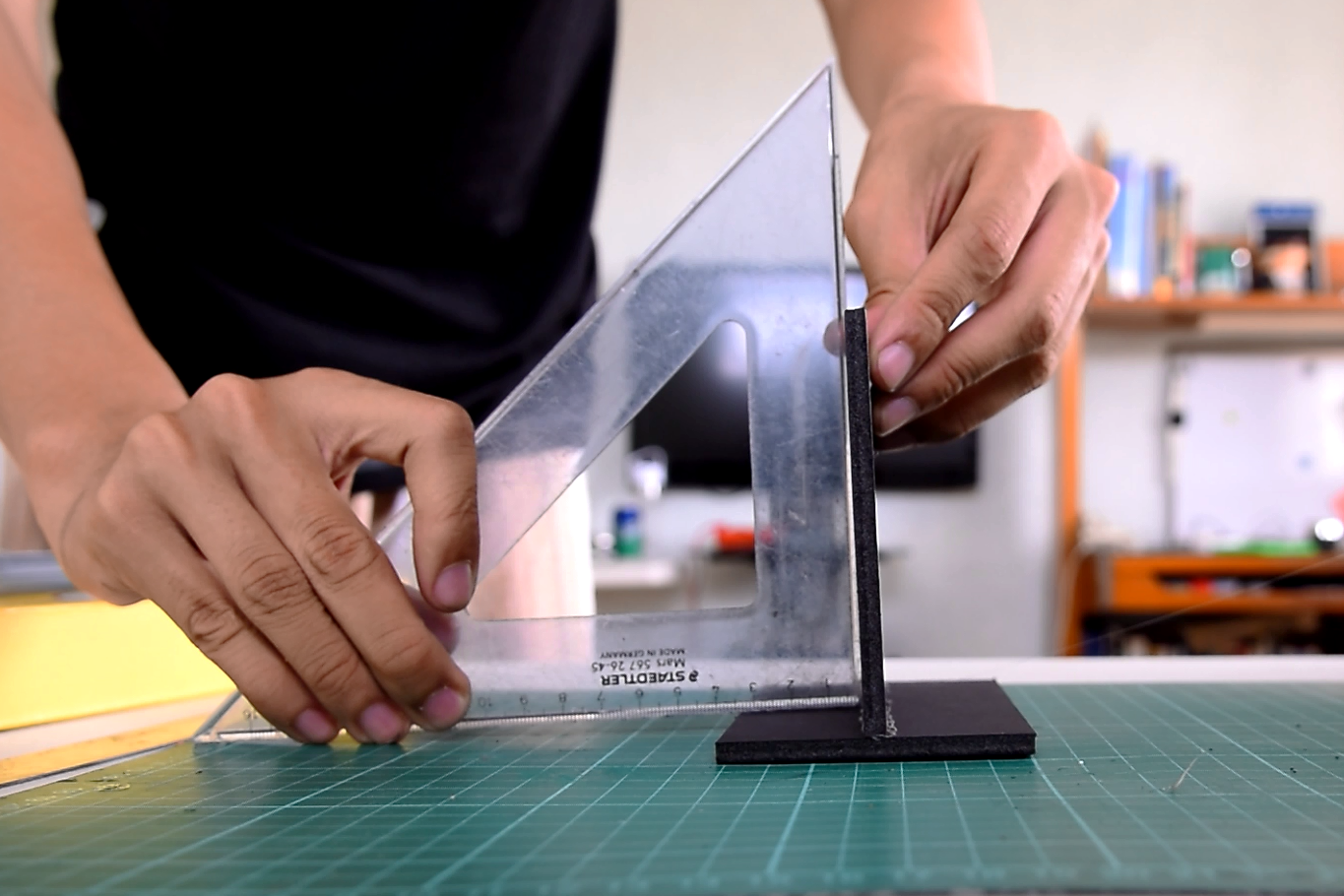 8. Now apply the double-sided duct tape on the back of your phone and press the phone against the mobile phone stand, so that your phone sticks and stays on to it. 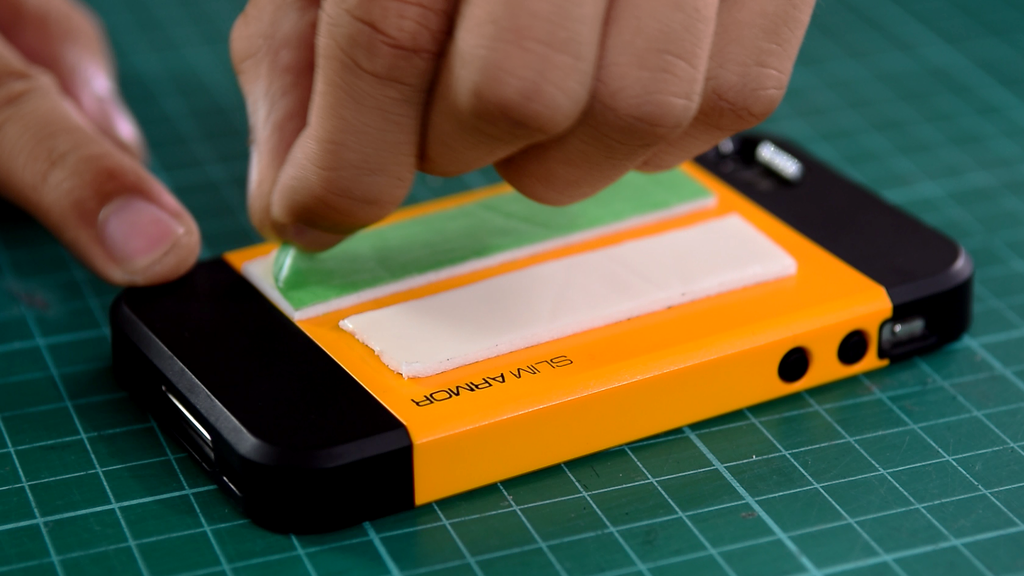 9. Now place this phone stand inside the shoe box, behind the magnifying lens

11. Keep your phone’s brightness to maximum and then calibrate the position of the phone stand inside the shoe box by moving it slowly closer to the lens. Notice how the image turns sharper/softer. Adjust it until you get the sharpest image.

12. You will notice that the image on the wall is upside down, you can solve this by first keeping your screen’s orientation upside-down and then locking your screen mode.

13. Close the lid of the box and switch off the lights in the room and your home-made projector is ready to show its true colours!

If you’re still wondering why the image on your phone has to be upside down (inside the shoe box) for you to see the correct projection on screen, there’s a good chance you already know the answer! It’s exactly how the human eye functions! Remember that the image formed is usually inverted but the brain corrects this phenomenon. That’s exactly what’s happening here too! Just instead of our brain auto-correcting the image, we are using the smartphone feature of keeping the screen image upside down. Well, technically that too is a hack by the brain to solve this problem, but it’s just someone else’s brain!

If you enjoyed reading this, you may also like

I will definitely try it out 🙂

That’s a great idea! But can I make this projector without removing the glass from the magnifying lens?

Thanks Byju’s for an amazing DIY craft which is useful

I will certainly try this out! The most wonderful part will be to watch my favourite movies with it.
Thank you byju’s for the wonderful idea!!

Thanks,
For giving best idea to make a projector

Wow it is Amazing

I know this how to make this. It’s a smartphone projector. The lens was bi lens or something… And Byju’s says it will be magnifying lens.

Okay thank you Byju’s for this amazing idea !??

Wow !Great DIY, will surely try, the most amazing part is that it is made with the help of simple tools that can be
easily found at home like cardboard etc.

> Is a song stuck on repeat in your head? Then you have a case of earworms!

> Why are Australians harvesting mosquitoes?

> Is a song stuck on repeat in your head? Then you have a case of earworms!

> Why are Australians harvesting mosquitoes?