Understanding the work that won Nobel Prize 2020 in Science

The 2020 edition of the Nobel Prize was declared in the second week of October 2020. As always, it honoured remarkable work of research in the field of science over the years, some dating back to 1965 and some as recent as 2012. Here’s a brief explanation of the works of the Nobel laureates of 2020 in the three science fields – Chemistry, Physics and Medicine/Physiology.

Chemistry – Re-writing the code of life The Nobel Prize in Chemistry was jointly awarded on Wednesday to Emmanuelle Charpentier and Jennifer A. Doudna for their 2012 work on CRISPR-Cas9, a method to edit DNA. CRISPR – Cas9 is a type of scissor or scalpel, made out of two RNA molecules and one protein molecule. It is used to split DNA molecules i.e. customizing genes – whether in microbes, plants, animals or even humans.

Ever since its discovery in 2012, the technology has exploded. It is relevant not only for animals but also plants. Doctors are testing it as a cure for genetic disorders such as hereditary blindness and sickle cell disease. In fact, some are even trying to bring some species back from extinction. It’s also being used by botanists (scientists who study plants) to create new disease-resistant strains of crops.

The word CRISPR is an acronym. It stands for Clustered Regularly Interspaced Short Palindromic Repeats. Cas9 is the name of an enzyme that helps in slicing the genetic material.

This is not the first time that scientists found a way to alter DNA. But all the previous methods before CRISPR, were relatively crude and involved use of expensive, cumbersome machines and materials. CRISPR  serves as a far more precise tool for genetic surgery. Although seemingly easy to use, operating CRISPR – Cas-9 involves consideration of various factors with extreme precision to be able to function with such accuracy. In 2002,  Emmanuelle Charpentier’s began her studies of Streptococcus pyogenes, one of the bacteria that cause the most harm to humanity, causing infections like tonsillitis, scarlet fever and cellulitis among others. In her research, she discovered a previously unknown molecule, tracrRNA. “Her work showed that tracrRNA is part of bacteria’s ancient immune system. CRISPR/Cas disarms viruses by cleaving their DNA,” says the Nobel Academy. In 2011  Charpentier initiated a collaboration with Jennifer Doudna, an experienced biochemist with vast knowledge of RNA. In 2012 together, they succeeded in recreating the bacteria’s genetic scissors in a test tube and simplifying the scissors’ molecular components so they were easier to use.

What had begun as an ancient system of antiviral defence quickly became one of the most powerful and precise genome-editing tools available to science. In less than a decade, CRISPR has become commonplace in laboratories around the world.

Physics – The darkest secret of the Milky Way galaxy revealed

The  Nobel prize in Physics this year was awarded half to Mathematical Physicist Roger Penrose for showing that  Einstein’s theory of general relativity leads to the formation of black holes. The other half to Astrophysicist Reinhard Genzel and Astronomer Andrea Ghez for discovering an invisible and extremely heavy object at the Milky Way’s centre that governs the orbits of stars. A supermassive black hole is the only currently known explanation.

Albert Einstein himself did not believe in the existence of black holes, these super-heavyweight monsters that capture everything that enters them, even light.

In January 1965, ten years after Einstein’s death, Roger Penrose proved using Einstein’s theory of general relativity, that black holes can really be formed. Describing them in detail; he stated, “at their heart, black holes hide a singularity in which all the known laws of nature cease.” His groundbreaking article is still regarded as the most important contribution to the general theory of relativity since Einstein. The diagram is based on Penrose’s paper from 1965 and shows the collapse of matter into a black hole.  credits: nobelprize.org

On the other hand, independent researches by Reinhard Genzel and Andrea Ghez, have discovered that an invisible and an extremely heavy object at the centre of the Milky Way governs the orbit of stars like the Sun. This extremely heavy object has the mass equivalent to 4 million suns (!)and is packed into an area about the size of our solar system. 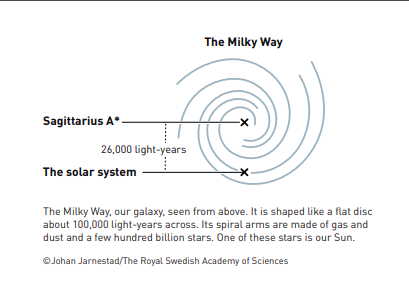 The 2020 Nobel Prize in Physiology or Medicine is awarded to Harvey J. Alter, Michael Houghton and Charles M. Rice for the discovery of the Hepatitis C virus in 1989.

The key to successful treatment of any infectious diseases is to identify the ‘causative agent’ behind it. In the 1960s, Baruch Blumberg discovered the Hepatitis B virus, and the discovery led to the development of diagnostic tests and an effective vaccine. Similarly, in 1989 American medical researchers Harvey J Alter, Micheal Houghton and Charles M Rice (who won the Nobel this year), contributed in the discovery of the ‘Hepatitis C Virus’.

For many years before its discovery, doctors and researchers were puzzled by the many transfusion-related hepatitis cases i.e. cases, where blood is donated by one person to another, that were neither hepatitis A or B. Harvey J Alter’s team, studied the same and revealed that blood transfusion from these unknown hepatitis patients could transmit the disease to chimpanzees, the only susceptible host besides humans and that the infection has characteristics of a virus. They referred to this unknown hepatitis virus as  “non-A, non-B hepatitis”. Subsequent research by Michael Houghton and his team led to isolating the genetic sequence of the virus. In their research, they identified a novel RNA virus belonging to the Flavivirus family, found in the blood of the infected patients and the chimpanzees. It was produced as an anti-body and was named Hepatitis C virus. Charles M Rice then took the study further by proving that the Hepatitis C virus alone could cause Hepatitis.

Research by Alter, Houghton and Rice have enabled highly sensitive blood tests for the diagnosis of Hepatitis C virus, eliminating post-transfusion hepatitis in many parts of the world, greatly improving global health. Their discovery also led to the rapid development of antiviral drugs for hepatitis C.

Hepatitis C remains a major global health concern, but the opportunity now exists to eliminate the disease. To achieve this goal, international efforts facilitating blood testing and making antiviral drugs available across the globe will be required.

They really did a great job. I hope one day may one of us win Nobel prize for finding a cure to Cancer.It’s really important!!

It’s so insane there a lot of scientists with amazing talent!!!!!! ??

Amazing post. Articles which have meaningful and insightful comments are more enjoyable,
at least to me. It’s interesting to read what other
people thought and how it relates to them or their customers, as their perspective
could possibly assist you later on.
Best regards,
Lunding Zacho

I would say this is one. You nailed it 8, from beginning to end.
To write this you might have worked for research.
King regards,
Lunding Duke

OOOOMMMMGGGGGGG!!!! Information is extremely interesting and fascinating and about one of my favourite topics in science. Thank you soooo much to byju’s team of superbrains for providing this precious information. ???