Three years ago, on February 6, 2018, Elon Musk, head of SpaceX and Tesla, launched a car into space. The vehicle, placed into orbit by a Falcon Heavy rocket, was the billionaire’s own Tesla Roadster, and sitting at its wheel was a spacesuit-wearing mannequin named Starman. The launch was indeed one-of-a-kind, and since then the Roadster has been orbiting the Earth at a spectacular average speed of 160 km/s. 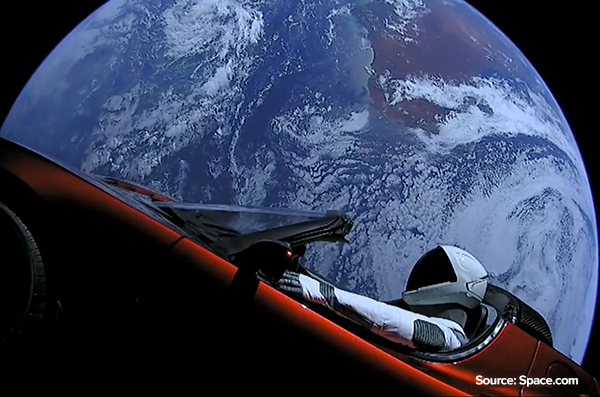 But, did you know that Musk’s car wasn’t the first unusual object to be launched by space enthusiasts? And it certainly won’t be the last!

For years we have been exploring space in the quest to expand our understanding of the universe beyond Earth. In the process, we have sent almost all kinds of innocuous objects to space; at times, to learn more about how they would behave, but just as often to achieve other goals. For example, we’ve sent mice into space to test their ability to breed. However, some other examples might surprise you a great deal!

In fact the list is so bizarre that it will make you wonder , “How did they manage to reach there?”

When space enthusiasts found their way into the outer world, it wasn’t long before music followed. The first instance was a Christmas-themed prank aboard NASA’s Gemini 6A spacecraft, which was conducted by astronauts Walter M Schirra Jr and Thomas P Stafford. 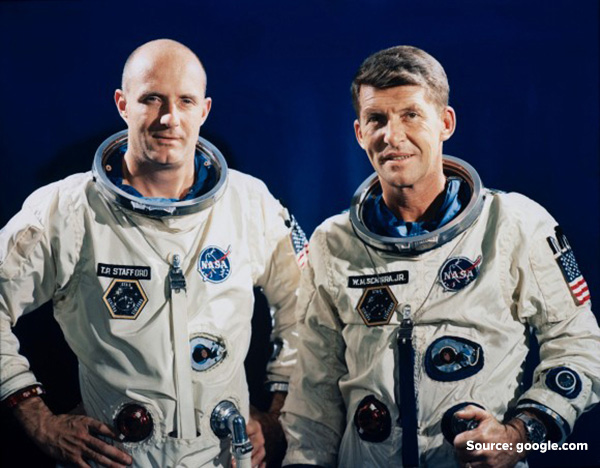 On December 16, 1965, Schirra reported to the teams on the ground, saying, “We have an object that looks like a satellite going from north to south, probably in polar orbit. Looks like he might be going to re-enter soon.” He then broke out into “Jingle Bells’’, on his tiny, four-hole, eighth-note Hohner Little Lady harmonica, with Stafford accompanying him on five small bells.

Hunger pangs? Pizza to the rescue!

In 2001 popular fast-food chain Pizza Hut paid one million dollars to become the first company in the world to deliver pizza to the International Space Station (ISS). 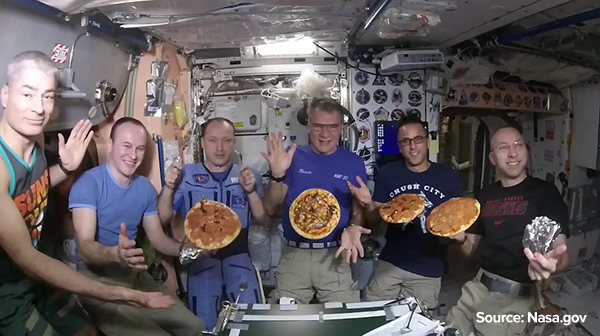 Pizza party by NASA Astronauts at the International Space Station was literally out of the world!

The lucky recipient was the Russian cosmonaut Yury Usachov who enjoyed the cheesy goodness as he posed for the cameras with a big thumbs up. The pizza was tweaked slightly though, with salami used instead of pepperoni, as the latter did not withstand the 60-day testing process. Extra salt and spices were added to tingle the taste buds, which get depleted in microgravity. The delivery may have taken a long time, but there weren’t any additional late delivery charges!

May the Force be with them

It is an age-old argument: Which is better, Star Wars or Star Trek? Whether you are a Trekkie or a fan of the Jedi, these two franchises have done more than any other work of fiction to shape our fascination for space. It was only natural then, for the astronauts who were fans of these two franchises, to think of carrying props from these two movies into space when given an opportunity. 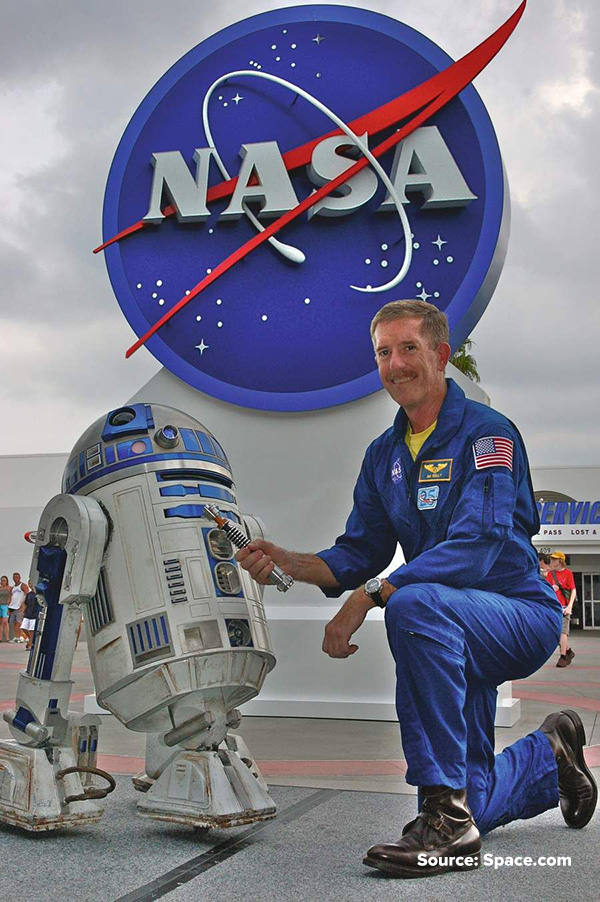 In 2007, a team of seven astronauts was jettisoned into space to deliver and assemble the Harmony module (also known as Node 2) to the International Space Station. It so happened that their launch coincided with the 30th anniversary of the release of ‘A New Hope’ in cinemas. To commemorate the event, Lucasfilm collaborated with Space Centre Houston to send the original lightsaber prop wielded by Luke Skywalker himself (played by actor Mark Hamill) into space.

Lego figurines made their way into space

These ubiquitous brick pieces have inspired many budding engineers, architects, and space designers. The Lego bricks have always been a child’s favourite toy. And considering its lightweight form factor, these figurines were a clever choice as a decorative item on a space launch too! 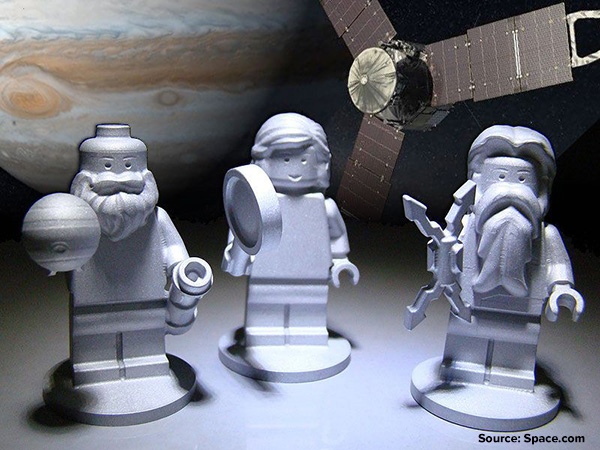 On August 5, 2011, NASA launched the Juno mission to study the giant gas planet- Jupiter. The orbiter intended to collect data to answer a raft of questions, including whether the planet has a solid central core, how much water is present in its atmosphere, what kind of magnetic field surrounds the planet, and how the giant weather systems on its outer face remain so stable. Accompanying the crew were three custom Lego figurines – Jupiter, the king of the Roman gods after which the planet is named, his wife Juno, and astronomer Galileo Galilei, whose early investigations of the planet were the leading source of information for centuries after his death.

What happens when one dies? Do they become stars? Do they fly high in the sky? Well, who knows, right? But what if there’s a possibility of flying in space after death? Well, humans have made that possible. 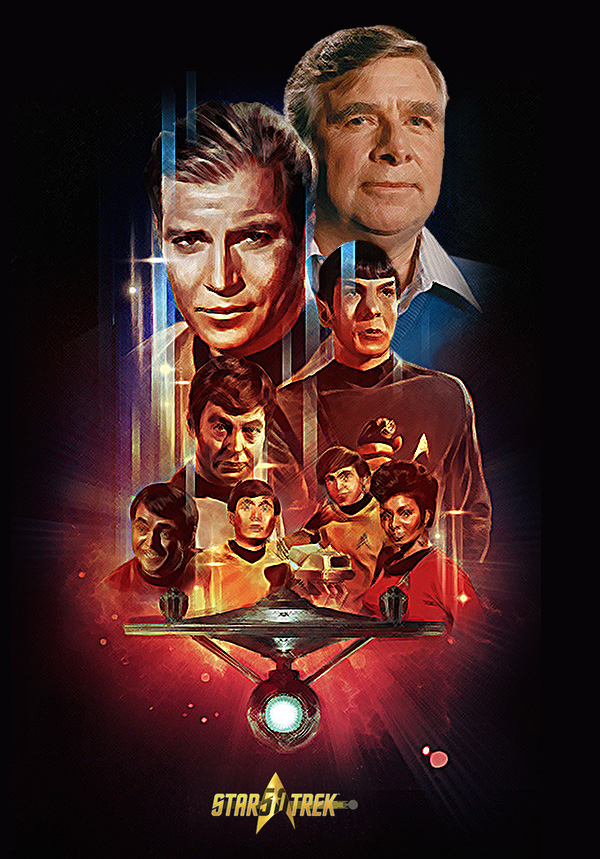 The ashes of Gene Roddenberry, the creator of ‘Star Trek’ was buried in the space

Launching human ashes into space as a memorial to their life is a beautiful way to celebrate human ingenuity. The first person to have their ashes sent to space was the ‘Star Trek’ creator Gene Roddenberry in 1992. In his will, he requested that his remains be boldly taken to where no one has gone before. So, a portion of his ashes was launched from Earth on the space shuttle Columbia for the STS-52 mission. Since then, several celebrities’ and scientists’ remains have been carried into space by NASA and by private space funeral companies. One such person was Clyde Tombaugh, the American astronomer who discovered the dwarf planet Pluto in 1930.

Buzz Lightyear: To infinity… and beyond! 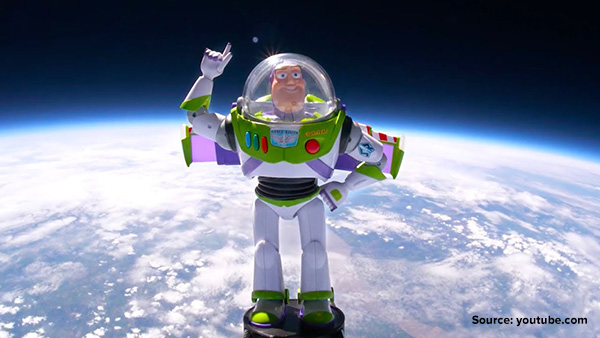 Buzz Lightyear toy flew to the International Space Station in 2008 through an educational initiative developed by NASA with Disney Pixar, as part of NASA’s broader “Toys in Space” project

On May 31, 2008, a 12-inch action figure of the space ranger from the Toy Story movies joined the crew of the space shuttle Discovery to spend 15 months in space – longer than any astronaut or cosmonaut! The mission was a part of Disney Parks’ ‘Year of a Million Dreams’ campaign, a collaboration with NASA to encourage young students to pursue careers in science, technology, engineering, and mathematics (STEM).

While these are undoubtedly some of the coolest and weirdest objects that have made it to space, there are tons of other objects that scientists have sent to space with the hope that they will be picked up by some other life forms.

Do you know of any such unusual objects that have been launched into space? Do tell us in the comments below.

Yes, there is! :
The Voyager Golden Records are two phonograph records that were included aboard both Voyager spacecraft launched in 1977. The records contain sounds and images selected to portray the diversity of life and culture on Earth and are intended for any intelligent extraterrestrial life form who may find them. The records are a sort of time capsule.

Although neither Voyager spacecraft is heading toward any particular star, Voyager 1 will pass within 1.6 light-years’ distance of the star Gliese 445, currently in the constellation Camelopardalis, in about 40,000 years.

Carl Sagan noted that “The spacecraft will be encountered and the record played only if there are advanced space-faring civilizations in interstellar space, but the launching of this ‘bottle’ into the cosmic ‘ocean’ says something very hopeful about life on this planet.”