We Are Never Alone: Living with the Human Microbiota

You are not alone, even when you think you are! You have millions of living creatures living all over your bodies. Their bodies rarely grow large enough for the naked eye to see. Our skin itself hides a miniature world from the normal view of our eyes. When seen at high magnification, an alien landscape appears.

Did you know that there are mites that spend their entire lives dwelling on your eyelashes? Crawling with their eight legs on your skin, dust mites feed on your dead skin that is shed from your bodies. More than a thousand strings of bacteria have made a cosy home in your belly button! Some 32 million bacteria cover your skin 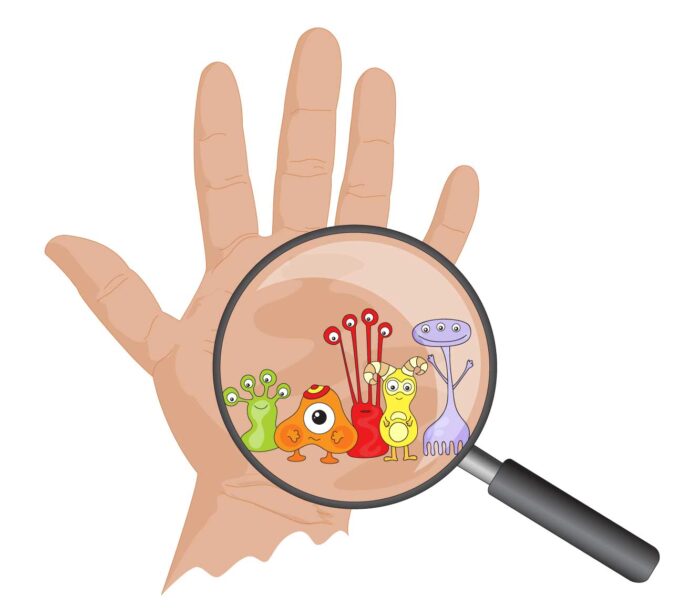 Now before you freak out and jump into a pool of soap water to clean yourself up, let’s understand what these microbes really are and what they do.

The Little World of Microbes

Yes, the world of microbes is little. These single-celled organisms cannot be seen with your naked eye. They include bacteria, archaea, protists, viruses, prions, and fungi. Bacteria for example are a thousand times smaller than a pencil tip. We have to use an instrument called a microscope, which makes the image of the bacteria big enough to be seen. 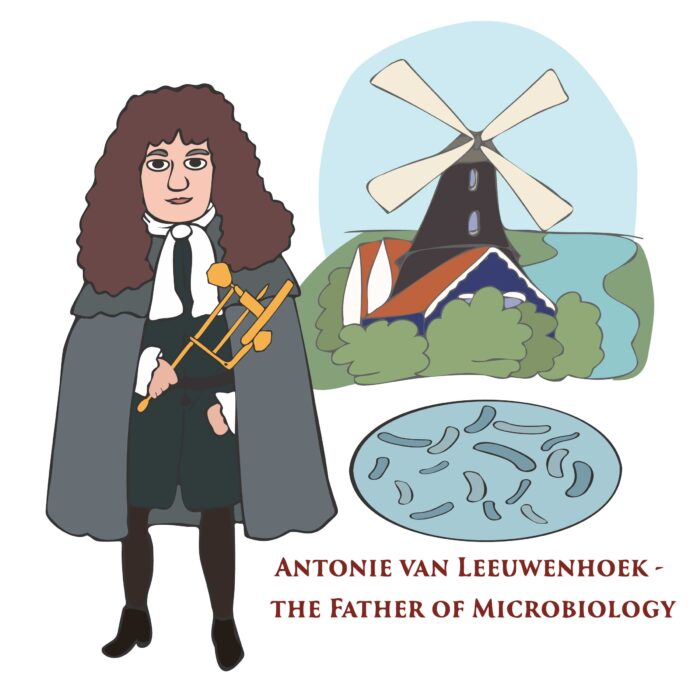 Leeuwenhoek was a fascinating character. He was not a trained scientist. But he had an insatiable curiosity about the world and he fed that curiosity by looking at the world through lenses that he made himself. These were the most powerful lenses and microscopes around at the time. He observed a drop of water from a lake under a crude microscope and was surprised to see microorganisms swimming around. In the water he collected from a pot outside his house, he observed bacteria for the first time. He realized that life existed and thrived at a scale beyond the threshold of our perceptions. He studied the dental plaque that coated his teeth and looked into the mouths of other people. There, too, he saw microbes. But he wasn’t disgusted at the thought of everything around us containing these tiny tenants. He was enchanted and amazed by this little world he had witnessed!

The Large World of Microbes

As far as the word ‘little’ is concerned, it can only be true about their size. In scale, the world of microbes is large, in fact, the largest! Microbes account for most of the diversity of life on Earth. There are far more microbes living on each one of us right now than there are people on the entire planet!

Microbes also dominate in terms of their ability to live and thrive in extreme environments, including clouds, deep-sea volcanoes, springs, and ice caps. They are everywhere! In the soil, rivers, plants, animals, tap water, on your keyboard, on your pillow and in your body!

Most animals, including humans, have a very close relationship with microbes. The human body is inhabited by millions of these tiny living organisms, which, all together, is called the human microbiota (micro meaning small and ‘bio’ meaning life). In fact, our mothers give us our first dose of microbes. When babies are born, they leave the sterile environment of the womb and gain their first microbes from their mother by passing through the birth canal.

If a baby is born through a cesarean section, its first microbes are more likely to come from the skin or the hospital environment. This isn’t necessarily a bad thing, but it’s definitely different from how it’s been for the most part of history.

What Do These Microbes do? 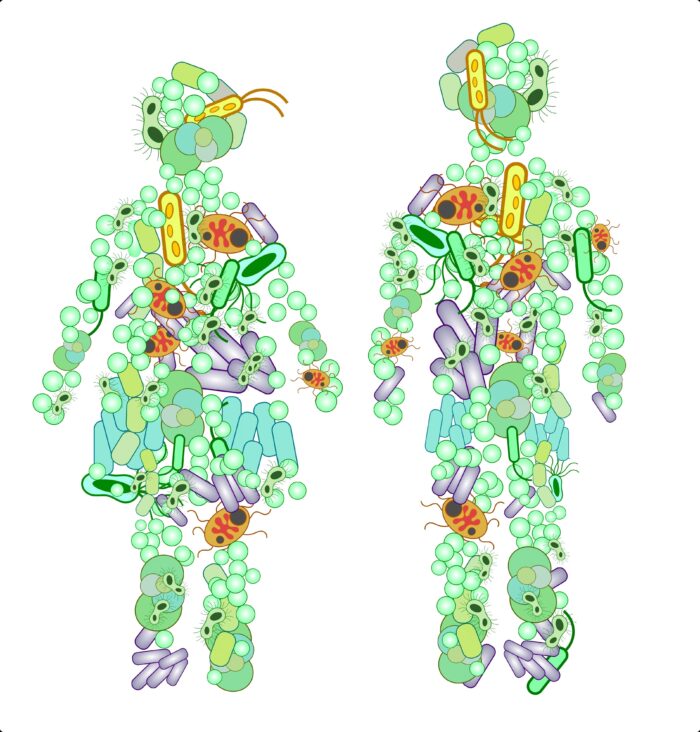 Microbes do so many things! In fact, most of our human microbiota is either neutral or beneficial. So what good things are these microbes doing for you? Here are some highlights:

Microbes play defence. The oodles of microbes that live on our skin protect us from pathogens or harmful organisms simply by taking up space. By occupying spots where nasties could get access and thrive, good microbes keep us healthy. It’s sort of like having a nice ground cover around your house which can prevent weeds from taking over. These microorganisms may also have a role in educating the billions of ‘T-cells’ that are found in the skin, teaching them how to respond to similarly marked pathogenic cousins.

Microbes boost the immune system. Researchers at Loyola University demonstrated in a 2010 study how Bacillus, a rod-shaped bacteria found in our digestive tract, bind to immune system cells and stimulate them to divide and reproduce. The research suggests that those with weakened immune systems could be treated by introducing these bacteria into their system. 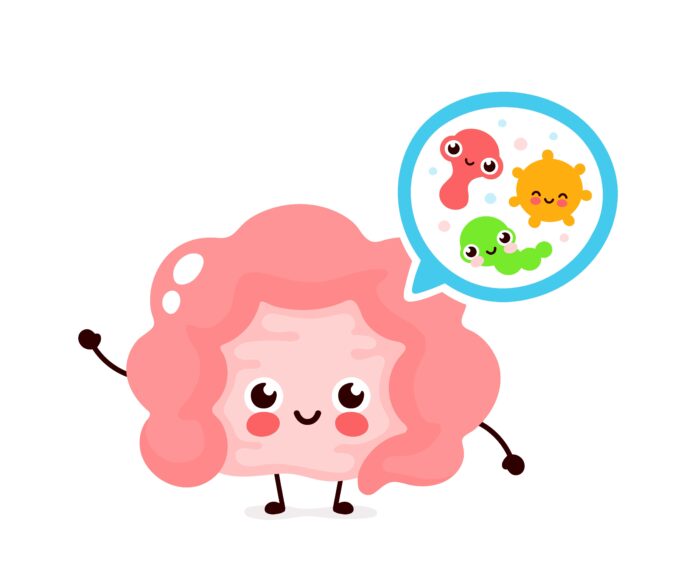 Microbes keep us slim. Microbes play an important role in our body shape by helping us digest and ferment foods, as well as by producing chemicals that shape our metabolic rates.

It’s clear that microbes have major implications for our health. And yet, much more research needs to be done to determine what different microbes do.

For example, there are microbes known as Demodex on your face. You can’t see them, but they’re there. They are microscopic, eight-legged creatures just like spiders. They spend their entire lives on your faces, where they eat, sleep, mate and finally die. 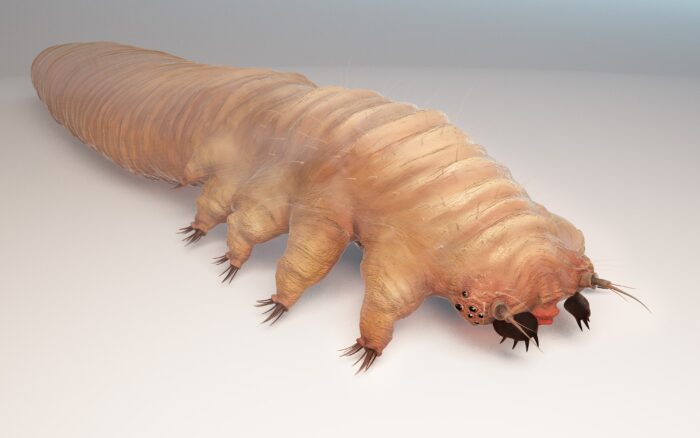 Before you rush to buy an extra-strong face wash, you should know that these microscopic lodgers are harmless. Almost every human being has them. Yet it’s not clear what the mites are getting from us. For starters, we’re not sure what they eat. Some experts think they eat the bacteria that are associated with the skin, while others think they eat the dead skin cells. Some think they’re eating the oil from our skin. But we don’t know the answer for sure!

Now having learnt so much about these tiny microbes, you must be wondering as to why these microbes are found almost everywhere and in everything.

You see, before animals or any other large, multicellular creature, microbes had been on Earth for more than at least 1.5 billion years! They were first, so naturally, every complex creature to come after, from jellyfish to dinosaurs, from termites to trees, and from lions to us humans – we all had to learn how to live and work with them.

But what happens when we try to live without them?

Without microbes, we simply wouldn’t exist. Most of us confuse microbes with “germs.” You might think fewer bugs means fewer diseases, but it’s not that simple. In a sense, cleaner isn’t always healthier! Which microbe we meet, and when we encounter it, makes a huge difference in who we become. In the 1970s, a Canadian doctor noticed that local indigenous children were less likely to get asthma and allergies than the White population, despite getting more infections. It seemed like kids who grew up in more hygienic environments ended up with immune systems weakened to attacks from stuff like pollen and household chemicals as if they were dangerous germs. This is the Hygiene Hypothesis. It says that growing up around a less diverse bunch of microbes can make our immune systems kind of jumpy and nervous later in life. Today, our food is safer, our water is treated, we have smaller families trading lesser microbes, we even live around fewer animals. Speaking of animals, one scientist analyzed household dust and found that houses with cats or dogs have more varied microbes.

As adults, our immune system protects us by calling on a library of past infections but when we are babies, that library is empty. Now this isn’t because babies don’t have their own immune systems yet. It’s because, for the first few months after they’re born, a baby actively keeps its immune system turned off, to create an opening for the baby’s first microbes to move in.

It’s clear that these doses of microbial life are some of the most important. Some of them take up residence to nourish and protect us, while others just pass on through to help our bodies differentiate friends from foes. But for most of the microbes that live in and on us, we still don’t know how they interact with each other or with us. What is clear is that without them, we wouldn’t be us!

Nature, Camera, Action! How wildlife movies are made

Why You Shouldn’t Give Cats Milk