Why does a cricket ball swing?

“People who do not play cricket (the majority of the human race) know it as a game of childish simplicity. Aficionados know cricket as a game of infinite subtlety, not only in strategy and tactics but also in its most basic mechanics. On each delivery, the ball can have a different trajectory, varied by changing the pace, the length, the line or, most subtly of all, by moving or ‘swinging’ the ball through the air so that it drifts sideways.” writes Rabindra D. Mehta,  a sports aerodynamics consultant and NASA scientist in his 2000 paper Cricket Ball Aerodynamics: Myth Versus Science.

When former Pakistani fast bowler (and Pakistan’s current Prime Minister)  Imran Khan introduced the illusive “reverse swing” technique at the international level in 1977, it took everyone by such surprise that accusations of ball-tampering made the rounds! But why? What is it about swing bowling and particularly the reverse swing that nobody understood until scientists like Rabindra Mehta studied it. Lets learn all about it today!

Imran Khan bowling a reverse swing against Australia in 1977 source:thesydneytimes

The science behind swing ball:

Explaining the same through fundamentals of fluid mechanics, Rabindra Mehta writes “ As the ball is flying through the air, a thin layer of air called the ‘boundary layer’ forms along the ball’s surface. The boundary layer cannot stay attached to the ball’s surface all the way around the ball and it tends to leave or ‘separate’ from the surface at some point. The location of this separation point determines the pressure and a relatively late separation results in lower pressure on that side. A side force or swing will only be generated if there is a pressure difference between the two sides of the ball”.

The separation point of the boundary layer from the ball is determined by its surface and the speed of the ball. Let’s first understand the role of the surface of the ball. This is where a concept called turbulent flow and laminar flow comes into play.

At the start of the match, the ball is equally shiny (has a smooth surface) on both ends across the seam, but after a while, one of the sides of the ball becomes rougher than the other. Because of the difference in the surfaces of the ball, the boundary layer air separation from the two surfaces happens in different manners. The smooth surface gives no resistance to the air, making the separation happen in laminar flow  – smooth and quick. Whereas the rough surface generates disturbance in the flow, or what is known as turbulent flow – resulting in late separation, as explained by Rabindra Mehta above. This difference in flow causes the change in the speed of the separation of air from both sides, leading to the swinging of the ball. 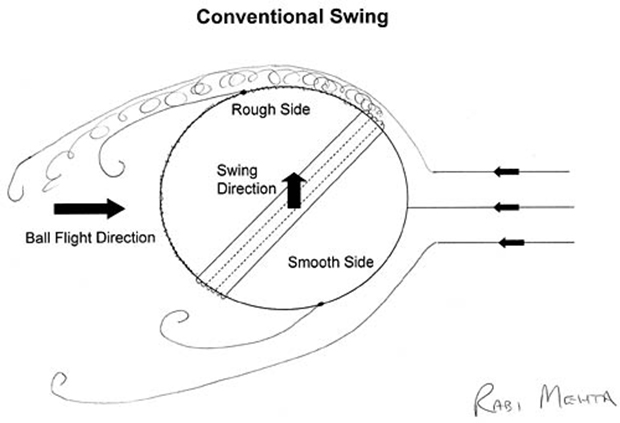 The popular analogy to understand laminar and turbulent flow is the water flow from a tap. Water flowing from a tap has a smooth texture when the flow rate is low (laminar flow), at this speed if you place your finger behind the water, you can see a clear image of it. But as the flow rate is increased (turbulent flow), after reaching a certain speed, voids and disturbances can be seen in it. Now if you place a finger behind the water, you will see a blurred image of your finger.

Notice how the speed of water plays an important role in the flow. Similarly, in swing bowling, the other factor that impacts the swing of the ball is the speed at which it is thrown.

Explaining the same, Rabindra Mehta wrote that if a bowler is bowling at a speed of more than 110 km/h or 31.2 m/s, say at 35m/s, then it’ll cause the asymmetry to reduce along with the swing. So to put it briefly, there will be no swing!

“In simpler terms, the aerodynamics of bowling mean that the shiny side travels faster through the air, while the rough side acts as a brake, pushing the ball in that direction”, says the BBC about the phenomenon of swing bowling.

So what’s the deal about the ball’s seam and swing bowling?

The seam of the ball is used judiciously by the fast bowlers to create swing in their bowling. If you’re wondering how, its the same logic that we just discussed! The seam of the ball is used as the rough surface that creates turbulent flow in the air around it and causes the swing. This is done by releasing the ball with the seam at an angle to the initial line of flight. It results in swinging the ball in the same direction as the seam is pointing.  So a ball released with the seam angled towards the slip fielders will swing away from the batsman (outswinger) and one released with the seam pointed towards fine leg will swing into the batsman (inswinger).

This is how swing bowling is possible even in the early overs of a match when both the sides of the ball are new and shiny. As the match progresses, bowlers try to keep one part of the ball shiny.  You may often find them doing so by applying sweat or saliva on the ball and then rubbing it against their clothes. Bowlers do this to keep one side of the ball shiny. In fact, other bowlers in the team also take great care to shine the same side to make it easier to swing the ball as the overs progress. Some people believe that the ball swings because it loses its weight as the game progresses. We now know why that is not really true.

But what happens when both sides of the ball get worn out after around 30-35 overs? Does the ball stop swinging if bowled at around 31.2 m/s?

This is when the magical concept of reverse swing kicks in!

As the name implies, in reverse swing, instead of the ball drifting towards its rougher side, it veers towards the smooth. The continuous effort by bowlers to keep one side shiny results in creating a slightly rough and a super-rough side after around 35 overs of a match, which leads to reverse swing.

During the reverse swing, even when a bowler is bowling an inswinger, the ball will swing away from the batsman. Explaining the science behind it, Rabindra Mehta explains that in the reverse swing the velocity of the ball causes the air to transition on both ends from turbulent to non-turbulent, which is amplified by the super rough surface. This thick layer of turbulence cannot hold on the surface and separates from the ball early. This results in the air on the turbulent layer of the relatively smoother side now sticking for a bit longer before separating, hence it leads to a reverse swing.

The tricky part is that batsmen keep a close eye on the ball to identify the smooth side and therefore the direction of swing. Reverse swing tricks them by swinging in the completely opposite direction. Bowlers often hide the position of the seam and the direction the smooth side is facing until just before the release. And batsmen are constantly trying to predict what delivery will fly out next from the bowler’s hands in a constant game of cat-and-mouse. After all, just one wrong guess can be the difference between victory and loss in a neck-and-neck game!

Charu, a feminist and an accidental writer, is yet to master the art of writing about herself. Always curious to learn new stuff, she ends up spending a lot of time unlearning the incorrect lessons. She enjoys all sorts of stories – real, fictional, new, old, hers and would love hearing yours too. Feel free to ping her at storyweavers@byjus.com to share anything that you think is worth sharing.

> Can ‘Space Taxis’ Be a Reality Soon?

> Can ‘Space Taxis’ Be a Reality Soon?