Planet Earth is home to some spectacular relics from bygone eras, the constructions of which seem to defy the technological capabilities of their time either because they’re too big, too heavy, or too complex.

As such, it’s easy to see why people are so fascinated with the iconic Egyptian pyramids.

There are a lot of mysteries surrounding their construction. How did people from 4,000 years ago create some of the largest structures on Earth? Among them, the Great Pyramid is made up of millions of precisely-hewn stones weighing at least two tons each. The question is how did they move these stones. How is their arrangement mathematically so accurate?

There’s no end to conspiracy theories about who built the pyramids. Frequently they involve ancient aliens, lizard people, the Freemasons, or an advanced civilisation that used forgotten technology.

So how exactly did the Egyptians build these things? Were aliens behind the construction of these amazing structures? Were the ancient pyramids of Egypt built by slaves?

Let’s jump right into these fascinating questions and answer each of them for you! 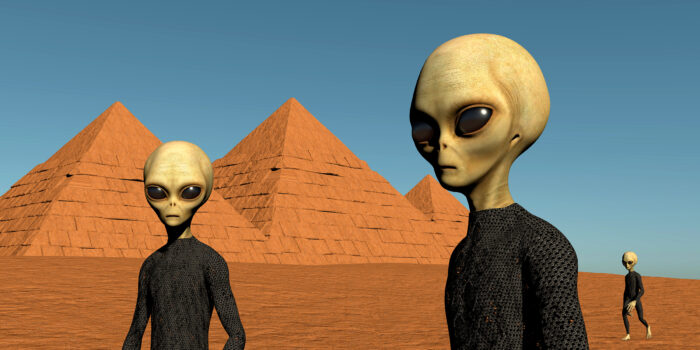 So are Egypt’s pyramids artifacts of aliens? Not exactly. It’s true that scientists are still researching  about how the ancient Egyptians built the pyramids—and especially how they did it so quickly—but there’s ample evidence that these tombs are the work of thousands of earthly hands.

In 1888, when British archaeologist Flinders Petrie started his investigation into the Middle Kingdom pyramid complex of Senwosert II at Ilahun, he found something remarkable. He found a walled settlement, with a complete town plan – neat rows of mud-brick terraced houses with pottery, tools, clothing and children’s toys – all the debris of day-to-day life that is usually missing from Egyptian sites.

If we are to make sense of the Great Pyramid at Giza as a man-made monument, this is precisely the sort of evidence that was needed. This goes to prove that Egypt’s construction sites were supported by purposefully-built villages and towns for the workers and their families to live. In order to determine who were the builders of the pyramids, Dr Moamina Kamal of Cairo University Medical School compared DNA samples taken from the workers’ bones with samples taken from modern Egyptians. She has discovered no trace of any alien race; human or intergalactic, as suggested in some of these imaginative ‘pyramid theories’.

So for  all of you who really believed that pyramids were built by aliens, this unfortunately is not true. But it’s even more wonderful to know that humans were capable of such a feat thousands of years ago!

Did slaves build the pyramids? Although it’s certainly more plausible than hypotheses like ancient aliens or lizard people, the idea that slaves built the Egyptian pyramids is no more true.

The Greek historian Herodotus tells us that the Great Pyramid was built by 100,000 slaves who ‘laboured constantly and were relieved every three months by a fresh gang’. He is, however, wrong. King Khufu – 4th Dynasty ruler of Egypt – the royal who was responsible for the commissioning of the Great Pyramid, did not have a vast body of slaves at his disposal. And even if he had, there was no way that 100,000 could work simultaneously on one pyramid.

The excavation at the sites also uncovered tremendous quantities of cattle, sheep, and goat bone, ‘enough to feed several thousand people, even if they ate meat every day, suggesting that workers were “fed like royalty”.

Another excavation by Zahi Hawass, famed Egyptian archaeologist and expert on the Great Pyramid, has found worker cemeteries at the foot of the pyramids, meaning that those who perished were buried in a place of honour. This was incredibly hazardous work, and the people who undertook it were celebrated and recognized for their achievement.

Pyramid building, especially Khufu’s pyramid, was a truly nationwide project with workers drawn to Giza from all over Egypt. Almost every family in Egypt was either directly or indirectly involved in pyramid building. The pyramid labourers were clearly not slaves.

Scale of the workforce All archaeologists have their own methods of calculating the number of workers employed at Giza, but most agree that the Great Pyramid was built by approximately 4,000 primary labourers (quarry workers, hauliers and masons). They would have been supported by 16-20,000 secondary workers (ramp builders, tool-makers, mortar mixers and those providing back-up services such as supplying food, clothing and fuel). This gives a total of 20-25,000, labouring for 20 years or more.

The workers may be subdivided into a permanent workforce of some 5,000 salaried employees who lived together with their families and dependents in a well-established pyramid village. There would also have been up to 20,000 temporary workers who arrived to work in three or four-month shifts, and who lived in a less sophisticated camp established alongside the pyramid village. 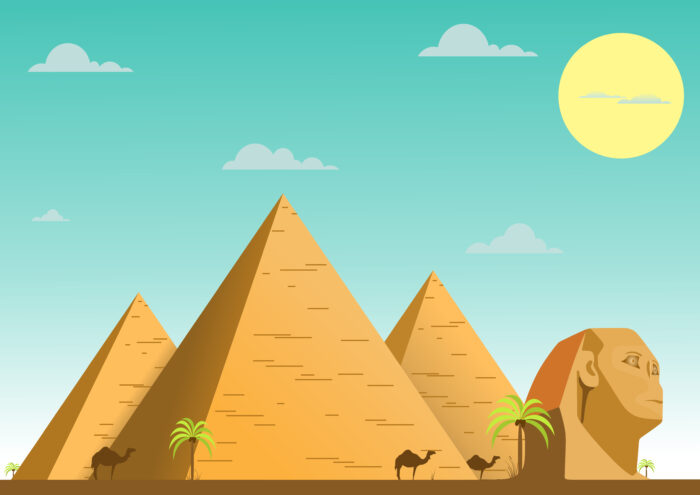 Recent archeology has also dealt a blow to extra-terrestrial or time-travel explanations, which begin with the assumption that ancient Egyptians could not have possessed the know-how and skill to build such structures over 4,000 years ago. Not so.

Bit by bit, archaeologists have been able to explain various mechanisms behind the building’s construction. The stones themselves were mined from a quarry just south of the pyramid. Researchers believe that the incredible feat of moving the outer stones without wheels and transporting the granite core of the pyramids 620 miles across the desert was made easier by wetting the sand first.

But that only explains how the stones got from one location to another, and not how they were then lifted high into the air and deposited in an enormous triangle.

Researchers believed that action would have involved a ramp of some sort, and that’s a pretty fair guess. It’s not as if they had a five-story crane. But as for the actual evidence of such a ramp researchers were coming up empty-handed. But, a new discovery in 2019 might shed light on how ancient people managed such a feat.

At Hatnub, another rock quarry located in Egypt’s eastern desert, a team of egyptologists found a very unusual ramp carved into the ground that hinted at some surprisingly advanced technological achievements. For one thing, it was pretty steep, but more significantly, it had staircases on both sides. These stairs were marked with recurring holes that could have contained wooden posts (which would have rotted away long ago). According to the mission’s co-director Yannis Gourdon, “This kind of system has never been discovered anywhere else.” What’s more, it’s dated to about 4,500 years ago, well before construction began on Khufu’s big legacy. 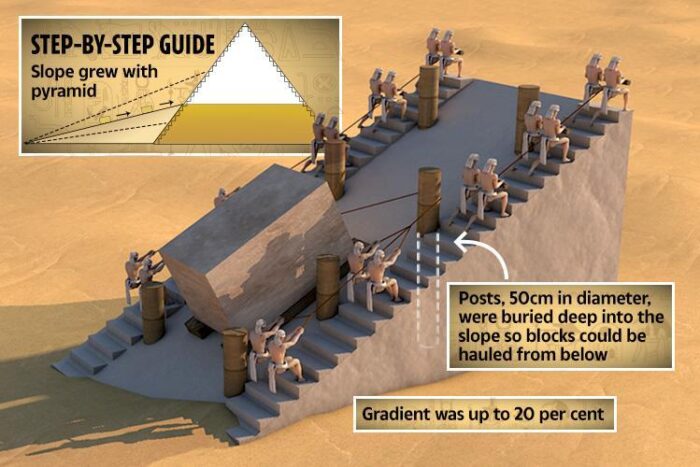 Another scholar who participated in the expedition, noted that the patterns of the holes in the stairs suggested a particular kind of rope-and-pulley system. Similar pulley systems are well-documented in Greek technology, but this discovery predates those devices by some 2,000 years.

The discovery of this ramp suggests that the ancient Egyptians had a firm grasp on the kinds of simple machines that can be used to turn an impossible amount of hard work into just a whole lot of hard work and create the marvel we know as pyramids today.

Read more about the myths and the realities of ancient Egyptian culture and life in the following articles:

Mummies on the move: Ancient pharaohs get new home in Egypt

Well, that was a titbit
?