That’s 11-year old Samyak (Sam) Ramchandre from Nuremberg, Germany. Wise beyond his years, Sam is a prolific swimmer who has represented three countries – India, The United States of America and Germany – in international races, winning multiple medals in the process. But perhaps the most memorable experience of his so far would be that of swimming with Jason Lezak, mentor to none other than Olympic legend Michael Phelps. “I got the chance to swim with Lezak on my birthday. It was quite special,” Sam tells us. Working towards his dream of being a decorated Olympic swimmer, Sam sat down with Team Storyweavers to talk about his journey so far.

Sam’s underwater exploits started when he was made to jump into the Krishna River as a toddler. “My dad wanted me to get connected with Mother Nature,” he says, adding, “I was just splashing around in the water and having fun.” As he grew older, he became increasingly drawn towards swimming pools. Soon, it was during a casual dip in an apartment pool at the age of four that his father spotted Sam’s interest in swimming. “I then decided to go to a swim school, where I learnt how to execute different strokes. That was the first stage of my swimming career,” says the 11-year-old.

With this came the opportunity to participate in competitions. Sam tells us, “In the US there was a competition in the summer called the Tri-county League. There, I stood first among my age group and won the championship. I also broke the record for my club. And when I was lifting the trophy I could see my name on the record. That was my first achievement when I was six years old.” 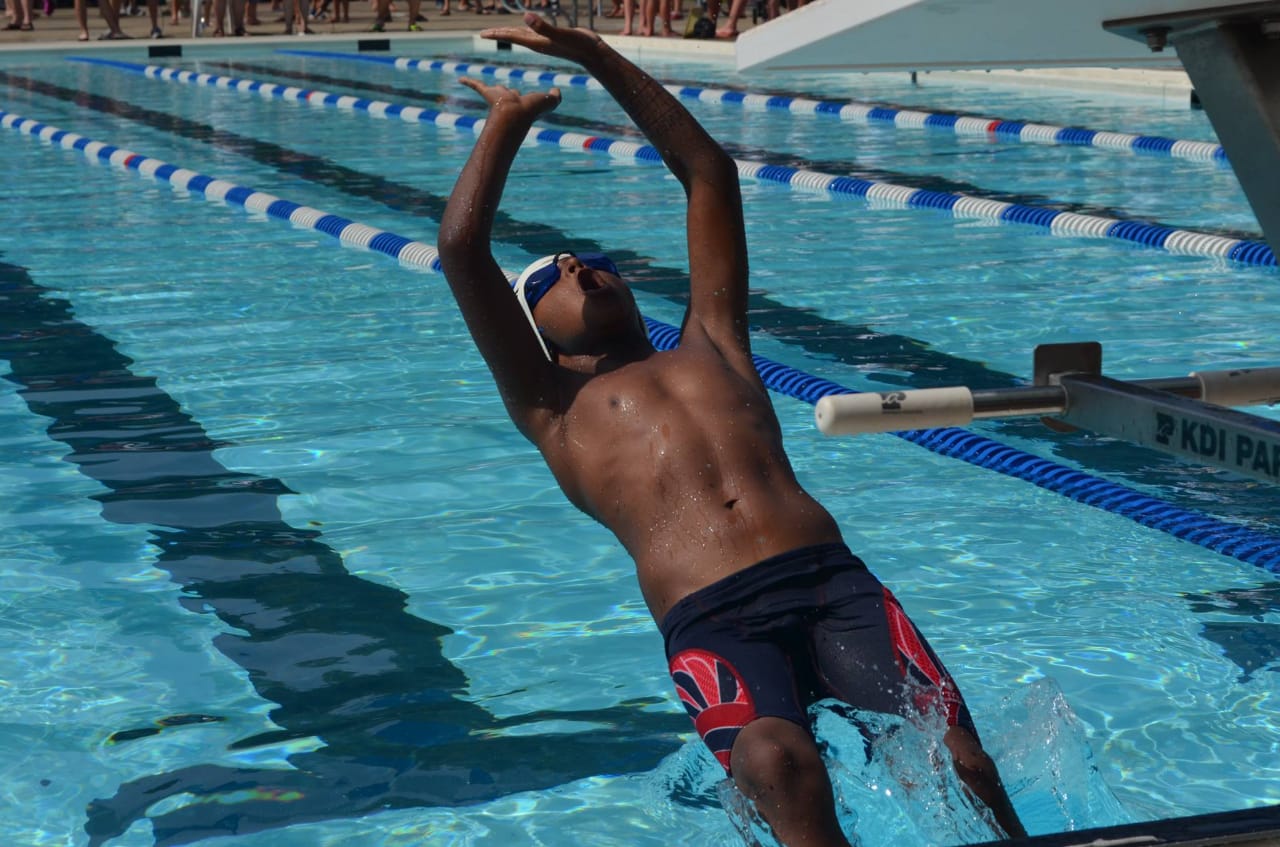 The back stroke is one of Sam’s specialties!

Having lived in three countries, Sam is in a unique position to have represented multiple national teams. “I was a member of the US national team when I lived there. When I was in India, I was the fastest swimmer in Maharashtra for the 50m freestyle category. My latest achievement is here, in Nuremberg, where I have been selected for the German national team.”

My whole family helps me pursue my career

Complementing his thriving passion for swimming is a rich support system that actively helps him succeed. “My mom helps me with my diet. She gives me the right kind of food at the right time. My dad on the other hand helps me with exercise and other sports. As for my coaches, they help me with my technique, while my sister loves to cheer me on. She is pretty loud though, especially when during competitions!”, he adds, with a hearty laugh. “There are also my grandparents who give me their blessings before every race. My relatives and friends always say that I will be an Olympic swimmer for India one day.” 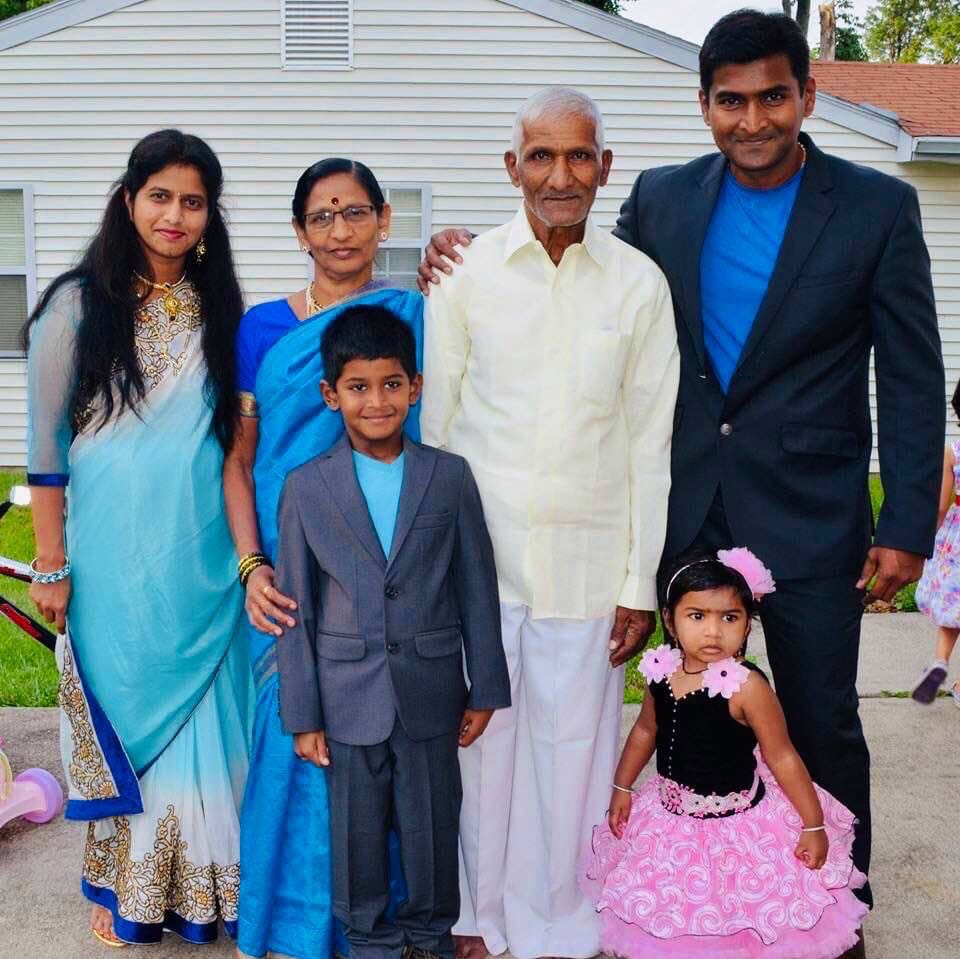 Sam with his family!

Sharing their experience during his swimming journey, Sam’s parents talk about their approach to help enhance Sam’s talents. Shitalkumar Ramchandre, Sam’s father, says, “As parents, our first job is to raise children in a way that they become good humans. That’s the minimum expectation that we (the family) set for ourselves and so we started working on it from when Sam was two years old. But the moment we saw a spark for swimming in him, we did not hesitate to help him. So in that way when we look at the entire journey, it makes us feel proud because the important thing is that he is actually enjoying everything that he does.”

Anita Shital Ramchandre, Sam’s mother, also shares how she has taken on the role of an expert nutritionist to help Sam with his dietary requirements during his journey towards an Olympic career. She says, “When I was in Pune, I did a nutrition course. The motivation for this was provided by my husband too. We’d discuss that since our son is now a swimmer we have to make healthy food for him. So as soon as he became a swimmer, I signed up for a nutrition course.”

BYJU’S gives me much more time for my activities

With a packed schedule, full of swimming practice and meets, how does Sam manage his studies? The answer is BYJU’S. Sam believes that learning from BYJU’S makes his learning simple and gives him the time needed to focus on his swimming. He loves the sports-based examples in particular that help him visualise and learn concepts. He says, “If I am learning angles they (BYJU’S) take the example of cricket. If I hit a six, they take a protractor to measure the angle and how far the ball went,” he explains.

Sam reveals that his mentor at BYJU’S plays a huge role in simplifying his method of studying. The 11-year-old says, “My mentor, Ashwin Sir, helps me with my studies. We have weekly discussions about my progress and performance. It’s fun to talk to him because he always asks about my swimming and never hesitates to answer my questions.”

Sam’s father says that it was a shift from the US to the Indian education system that motivated him to enrol Sam with BYJU’S. “When we were kids, the focus was more on play time, but now I see everybody pushing kids to study. So much so that nowadays most kids study under the influence of fear. But when I saw the uniqueness of BYJU’S for the first time, I realised that it is different from routine execution. BYJU’S teaches you to follow excellence. So in short I can say that education with BYJU’S comes with 5 Es: experiment, experience, excitement, enlightenment and exposure. That’s something that my kid learnt from BYJU’S. And these 5 Es are important to shape one’s life, and I think that’s good enough.”

We wish Sam all the very best for his Olympic dreams!

The sixth-grader from BYJU’S who built a COVID detector to help people!

BYJU’S Helps This Under-14 Cricket Champ Breeze Through Studies

Agricultural Waste into Paper? Here’s How Ranjita Figured Out a Way to Help Farmers

Hey
That’s great ?
I hope you will succeed your dream and one day you’ll represent India.
Good luck:-)

Wow samyak ??congratulation. Keep it up and best of luck for your future.

I am very happy for SAMYAK.
Keep going ?

Congratulations great samyak????????? I will pray for you to become a Olympics swimmer.

All the best for your new journey samyak, stay safe and happy

Well done samyak.? You did a great job.
Keep it up ?

I want to also make my india and family proud . I got and karate and debate but due to this pandemic not only me others are also not getting to show there talent

Samyak india is pround of you. You done a great thing. An inspiration for all childs including me.

Very good samyak..
.we r proud of you

I want to swim

Hey
That’s great ?
I hope you will succeed your dream and one day you’ll represent India.
Good luck:-)

the best thing is to follow your goals
And you did that ?
Exactly superb
I also can’t do so after being your age
Keep it up ??

Byjus help for science and math

I also want to join swimming
So what is prosess

Nice Sam
All the best

Can I speak with you

Dear Samyak you are a very good person and even extremely motivative for me because I am also good at skating I have even gone to state level but cause of this pandamic situation I am not able to practice at my skating classes but your motivation told me that just don’t just see dreams you if you want to complete your dreams you have to do hardwork but if you are not able to practice so we should have a help with our coach by with any kind of contact thank you and have a nice day ?

Wow such a great swimmer,also a great journey of is swimmer life. I also want to learn swimming but bcs of this pandemic situation I can’t. First I was learning swimming in Nagpur as I live in Nagpur in the 3 std but I forgot how to swim now bcs there is no practice from 5 years ( I am in 8 std ) ☹️. But it’s ok ?.
Thank you and thank you Byju’s for giving me /us such types of informations.
Thank you ?☺️.

Proud of you Samyek. I hope your all dreams come true.??

Thankyou Byju’s for posting this wonderful blog…
SO INSPIRATIONAL…???

Thanks to all bjyus teacher

Me too having a unique talent of mathematics. I play with numbers and make the numbers plays with me. I can visually calculate numbers, visually says multiplication tables of 5 digits also I can say you the exact day when someone is born by just knowing his or her dob, and many more. I am in 6th std and a byjus premium course student. Allow me to exhibit my talent on thi platform.

Wow he done a good job ?