Everything You Ever Wanted to Know About the Suez Canal 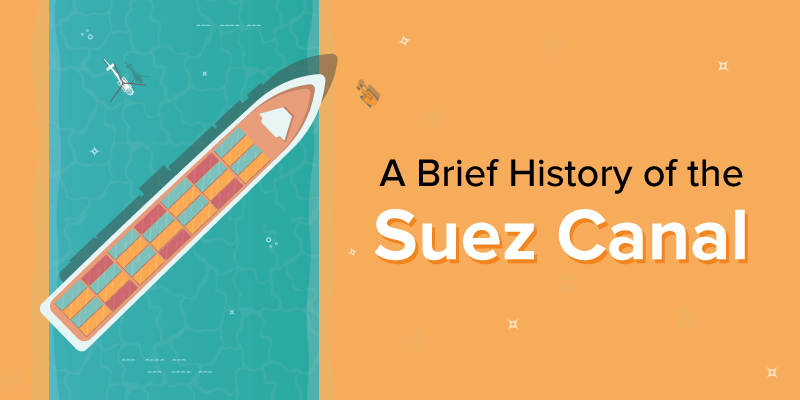 You might have heard about this huge ship called Ever Given that blocked Egypt’s Suez Canal, costing millions of dollars an hour.

The stranded ship caused a massive traffic jam and brought sea shipping to a halt at one of the world’s busiest waterways.

Things got ‘interesting’ when the authorities brought a ‘tiny’ bulldozer and a excavator to free the ship and clear sand around the massive ship. 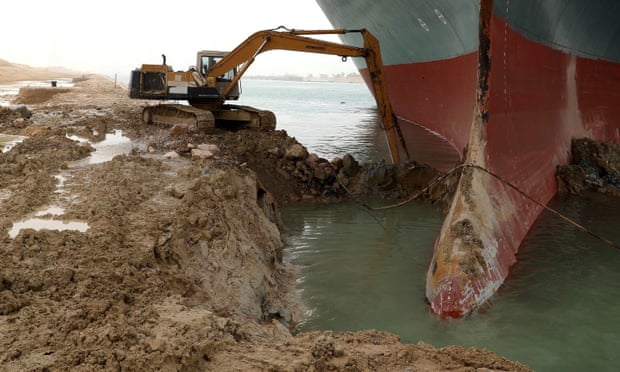 This whole messy situation obviously provided the internet with fodder for some hilarious memes. People got creative with their ideas to free Ever Given, some compared the tiny excavator with their life.

Finally the 400m-long ship Ever Given was dislodged with the help of dredgers after 7 long days. Tug boats honked their horns in celebration as hundreds of ships could now pass through the canal which links the Mediterranean Sea to the Red Sea.

Suez Canal is one of the world’s busiest trade routes and this blockage affected countries all around the world. But why are sea routes so important to us? And what makes this canal one of the most important routes in the world? Sea transportation has a vital role to play in our daily life as it benefits every single person across the world. Despite the fact that the developments in the aviation industry have made the movement of people and goods faster, the shipping industry remains critical to the growth of economies.

As a backbone of international trade, sea transportation enables the movement of tonnes and thousands of goods – from toys to trucks- every day through the vast and unending oceans and seas.

According to the International Chamber of Shipping, the shipping industry has over 50,000 merchant ships offering service internationally. And it carries out almost 90 percent of world trade.

Canals: A Man-Made Marvel in the Sea 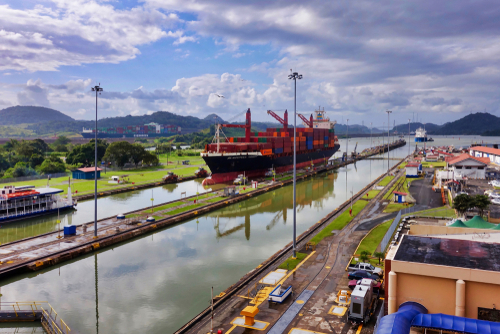 The Panama Canal is an artificial 82 km waterway in Panama that connects the Atlantic Ocean with the Pacific Ocean.

It’s not only the various natural bodies that enable the international seaborne trade. A number of human interventions in marine transportation have also strengthened the movement of people and goods worldwide.

The man-made canals in different parts of the world have transformed international shipping by shortening the shipping routes and reducing operating costs. Canal is an artificial waterway constructed to allow the passage of boats or ships inland or connects different waterbodies.

Where Is the Suez Canal? The 193.30 km (120 miles)-long Suez Canal is an artificial sea-level waterway located in Egypt and connects the Mediterranean Sea with the Gulf of Suez, a northern branch of the Red Sea.

The Suez Canal is one of the most heavily used shipping routes in the world, witnessing the passage of thousands of vessels every year.

The canal, which separates Asia from the African continent, offers the shortest maritime route between Europe and the regions that share a border with the Indian Ocean and the Western Pacific Ocean.

It enables a more direct route for shipping between Europe and Asia. The canal is one of the busiest waterways in the world, negating the need to navigate around the Cape of Good Hope in Africa. This effectively cuts distances by up to 7,000 km. Interest in a marine route connecting the Mediterranean Sea and the Red Sea dates back to ancient times. The canal has existed in one form or the other since construction started under the reign of the Egyptian pharaoh Necho II in the late 7th century B.C. Many kings who ruled later kept improving and expanding this canal.

The idea of the modern Suez Canal picked up steam after the French emperor Napoleon Bonaparte invaded Egypt in 1798. Dreaming of constructing a quick passage to India (already the crown jewel in the British Empire) the French general dispatched a team of surveyors to chart the course of a canal. But Napoleon’s efforts to build a proper canal were brought to an end due to an inaccuracy in the measurements.

Construction of the Canal 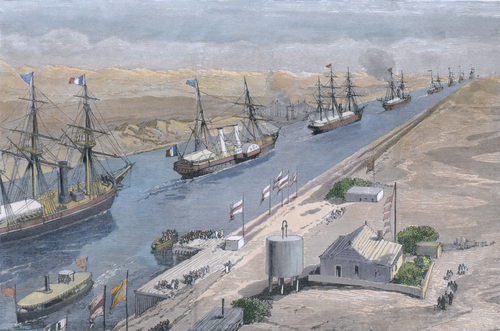 The idea of a large canal providing a direct route between the two bodies of water was first discussed in the 1830s, thanks to the work of French explorer and engineer Linant de Bellefonds.

Decades later, the enterprising former French diplomat Ferdinand de Lesseps secured financing from the French government and the permission of the Ottoman ruler in Egypt for his company to begin construction of what would become the Suez Canal in 1859.

The initial years involved a huge human undertaking, as workers removed and dredged many million cubic feet of earth. By one account, more than a million Egyptian peasants were forced into the project and tens of thousands perished, contracting diseases like cholera in circumstances likened to slave labour.

The Suez Canal took 10 years to build and was officially opened on November 17, 1869. But the canal has had anything but smooth sailing in the 150 or more years since it was formally built. In fact, political, financial and technical problems have resulted in the canal shutting down five times, the last closure lasting eight years before reopening in June 1975.

The wars over Suez Canal 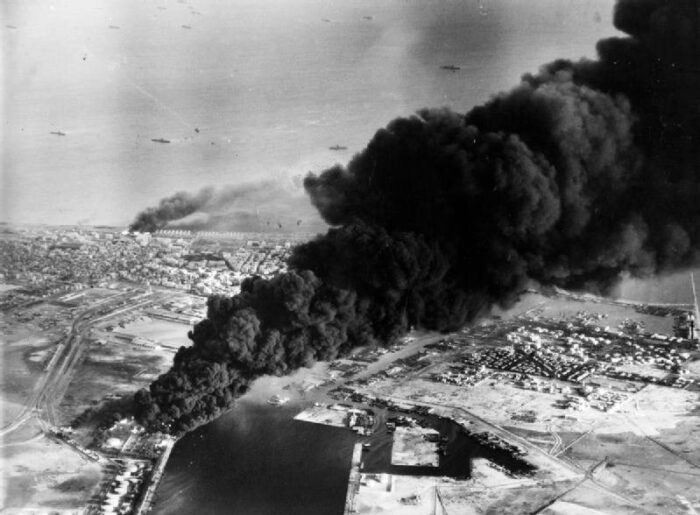 Smoke rises from oil tanks beside the Suez Canal hit during the initial Anglo-French assault on Port Said, 5 November 1956.

In 1956, Egyptian President Gamal Abdel Nasser nationalised the Suez Canal. Nationalization refers to the process of a government taking control of a company or industry.

This move by the Egyptian President led to the Suez Crisis with the UK, France and Israel mounting an attack on Egypt.

The conflict ended in 1957 after the United Nations got involved. It was the first time that the UN Peacekeeping Forces were deployed anywhere in the world. Even as the occupying forces withdrew their troops, the UN forces were stationed at the Canal, in the Sinai area to maintain peace between Egypt and Israel.

In 1967, Nasser ordered the peacekeeping forces out of Sinai leading to a new conflict between Israel and Egypt. Israelis occupied Sinai and in response, Egypt closed the canal to all shipping. The closure lasted for 8 years until 1975 when the two countries signed an agreement that both countries agreed upon.. 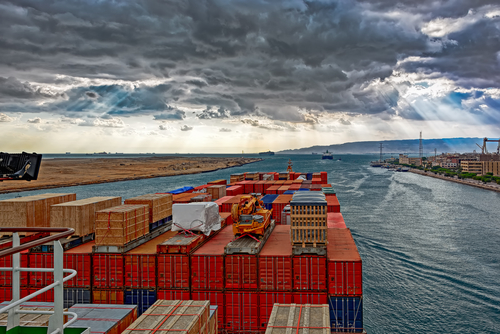 The canal continues to be the lifeline for all trade between the West and East as 10 percent of the global trade passes through it every year. The average fifty ships that pass through it daily carry about $9.5 billion worth of goods, every day. The freight and cargo include everything from oil and cement to consumer goods and even live animals!

In a study conducted at the University of Oregon, economists examined the importance of various hubs facilitating trade between various destinations. Of them, Egypt was found to be the most important in being able to affect the global economy. 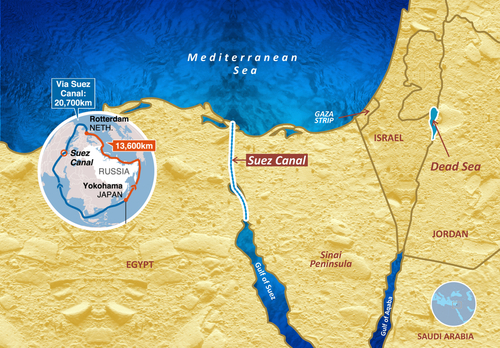 The reason for this is Egypt’s location, which makes it a central hub. The 120-mile canal through the country connects the Mediterranean Sea to the Red Sea. This makes it a vital passage for ships seeking to travel between Asia and Europe without having to circumnavigate Africa in the process.

About 80% of the volume of total international trade is transported by sea, according to the United Nations. The very purpose of the canal is to shorten transportation routes for global supply chains. It allows ships to save thousands of miles in their journeys, making it one of the most trafficked shipping lanes in the world.

The recent Suez Canal blockage was a rare accident that has highlighted how much the world’s economy relies on shipping.

The incident also raises questions about finding solutions to prevent future accidents and reducing the global dependence on this narrow waterway.

Enjoyed reading this? Then you’ll love reading about the history of sea travel in The Origin Story series.

Thank you for this information^_^.
I have only heared about it but now I know the full information.

This proves that in the world of the internet and massive development in technologies sill shipping industries matters most.